A clear blue sky, a no-track slope, and the best companion.THE DAY is a day when all the conditions are perfect. Last season, photographer Gian's THE DAY, which continued to climb the mountains almost every day, was a day of shooting with young Hokkaido riders Takahiro Taniguchi (Lib Tech) and Takanori Hayashi (GNU).This is the story of THE DAY that I experienced on a short trip of 1 days
Photo & Text: Gian 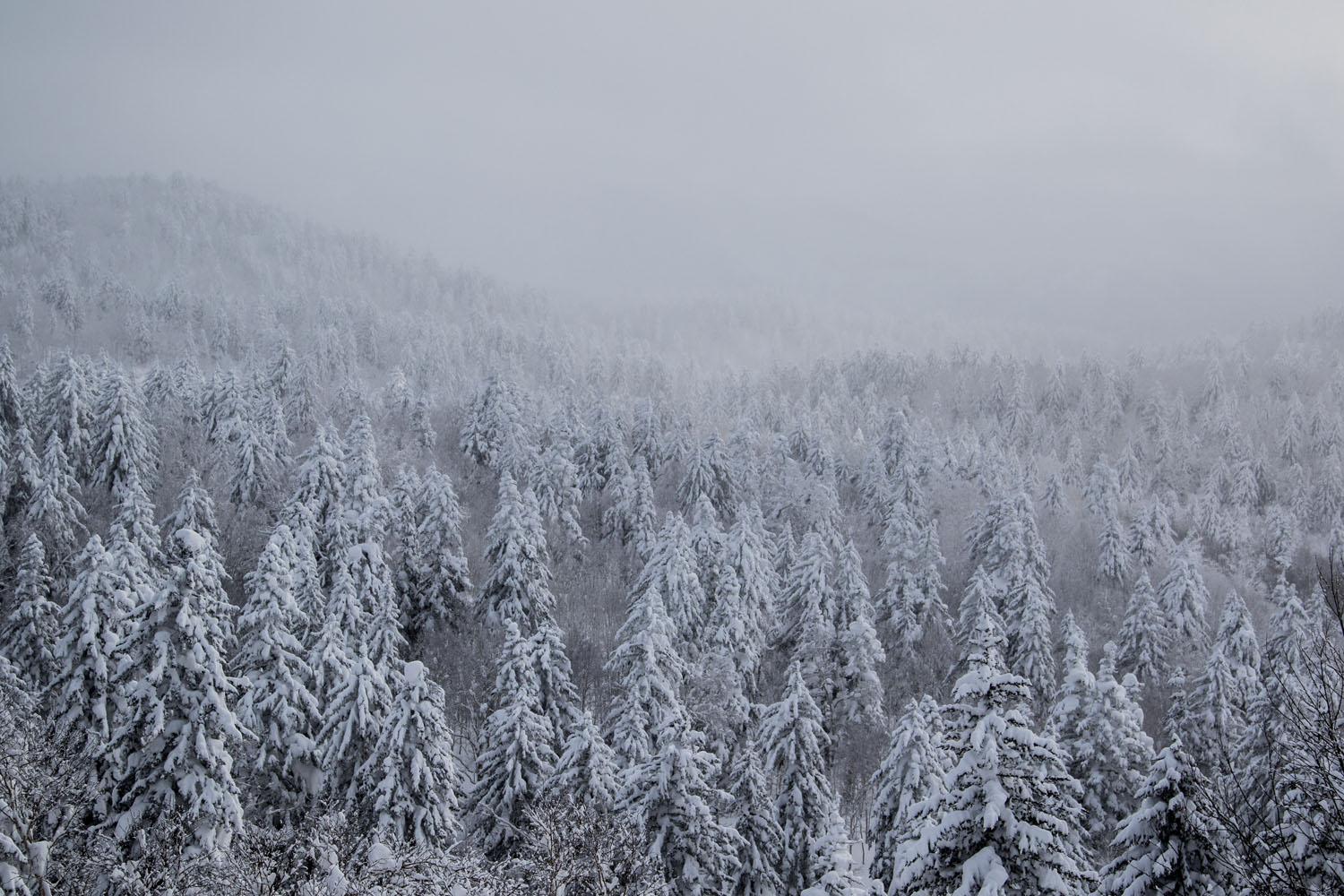 In late February, I decided to invite Takahiro Taniguchi (Lib Tech) and Takanori Hayashi (GNU), who have been holding sessions on the snow and in the city with my old friends, to shoot BC.When I called out, it was a good timing because the schedule of just two people was completely empty.They are usually active mainly in competitions, but since both of them were born in Hokkaido, their natural skills are also high.Takanori is not good with me, and Taniguchi is one senior in high school.It's a shooting trip of the same generation.
Sunlight, the condition of the light that we do not want, is an important factor for shooting.In the high season of Hokkaido, there are few sunny days as if it is inversely proportional to the amount of snow that is not hampered.It is the photographer's daily routine to check the weather forecast every night to determine where and when the sun will come out.Only three days have been prepared for us three this time.Leave absolutely good things in this limited number of days.Neither I nor the rider was enthusiastic. 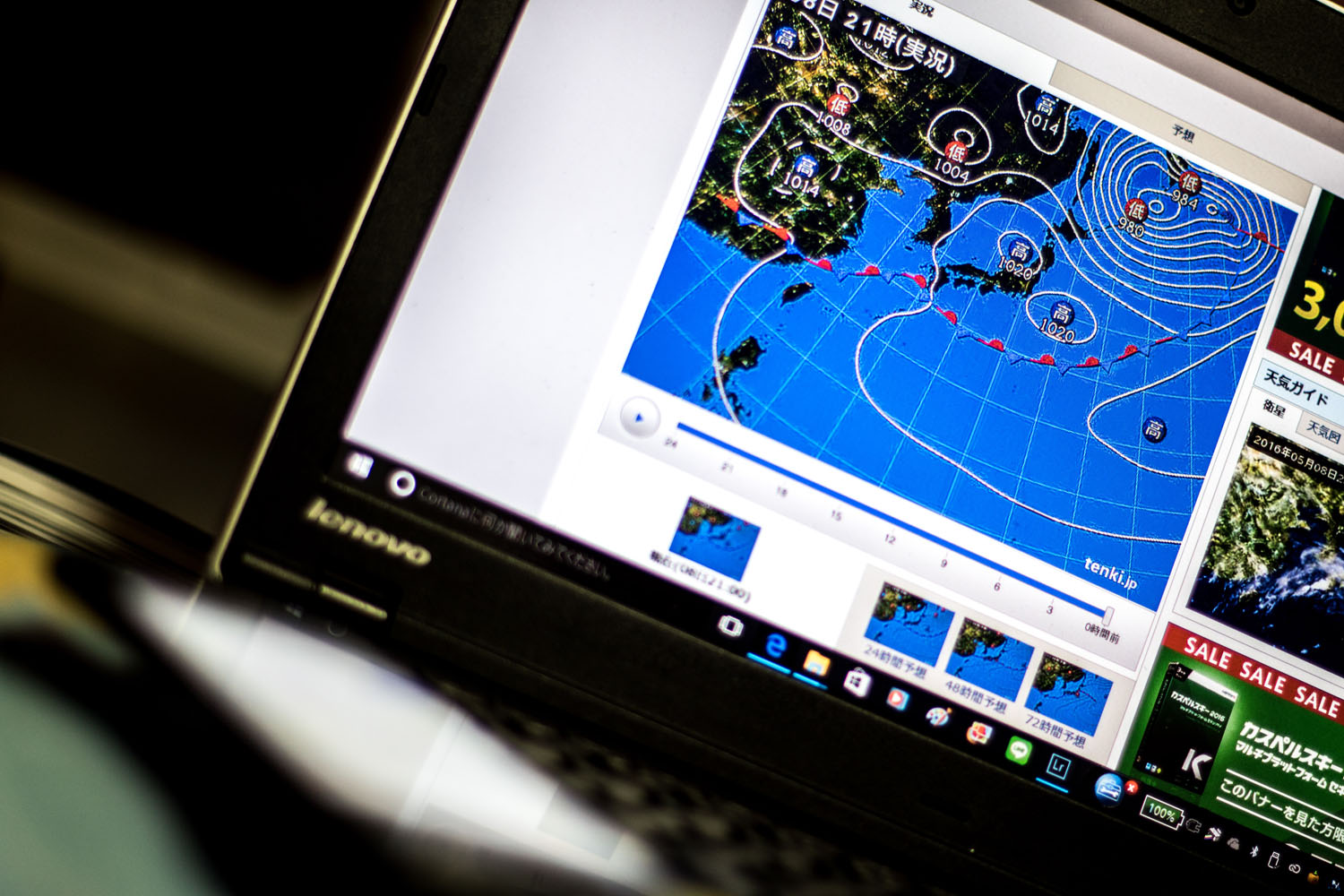 The weather forecast for the first day is snow on all roads.According to the forecast the day before, it will be cloudy from the afternoon.After discussions, the destination I chose was the northern area of ​​Central Hokkaido.When I arrived at the spot and checked the condition, there were many places where the south slope was slumped due to the combination of warm winter and low altitude.The aim is to shift to shooting on the north slope where snow seems to be good.After hiking up, drop to check the condition of the snow, the snow is a light and fluffy powder.However, the light is weak and it is far from being called THE DAY.Mr. Taniguchi slides the powder freely even with a switch.As quickly as warming up, I rolled up the pleasant powder on the switchback side and slid down.

Takanori chose a tight jump line.Takanori, who is usually missing somewhere, changes completely when he wears a snowboard, and even difficult landings stand up without blurring.The weather was cloudy, but both were aggressive. When I'm in the mountains all day, my body is sick, but the time left for us is short.I drove to the next destination without being immersed in memories.

On the second day as well, I decided to shoot in the southern part of Central Hokkaido, believing that the snow forecast was all over the road and the weather would recover from 2:15.The place selected as the shooting spot is easily hit by the wind, and the occasional gusts blow with considerable strength.Not only in the middle of winter in Hokkaido, but also below freezing, when exposed to strong winds, the body temperature is deprived at once.Waiting for the light in such a situation is just harsh.Riders are careful not to get stiff.It's a game between time and cold.

In the afternoon, the weather was settling down as expected.The sunlight gradually settles down, and the snow is slightly dyed orange.The moment I tried to shoot at the best timing, a big cloud struck the sun.Whether the sun sets or the clouds come out, it's a terrible time.The sun had already set by the moment the clouds came out after waiting for a frustrating time.Things that don't go so well.It is a daily occurrence to be played in the weather because it is a natural partner. Seen from the edge, it may sound like a tough story, such as patience in sub-zero temperatures and conflict with the sun.However, this is a gathering of Hokkaido horses, and I'm used to it, so the air during shooting is very loose.Takanori's occasional aerial disassembly landing on the fuselage and the natural laughter that falls into the river along the way are constant. 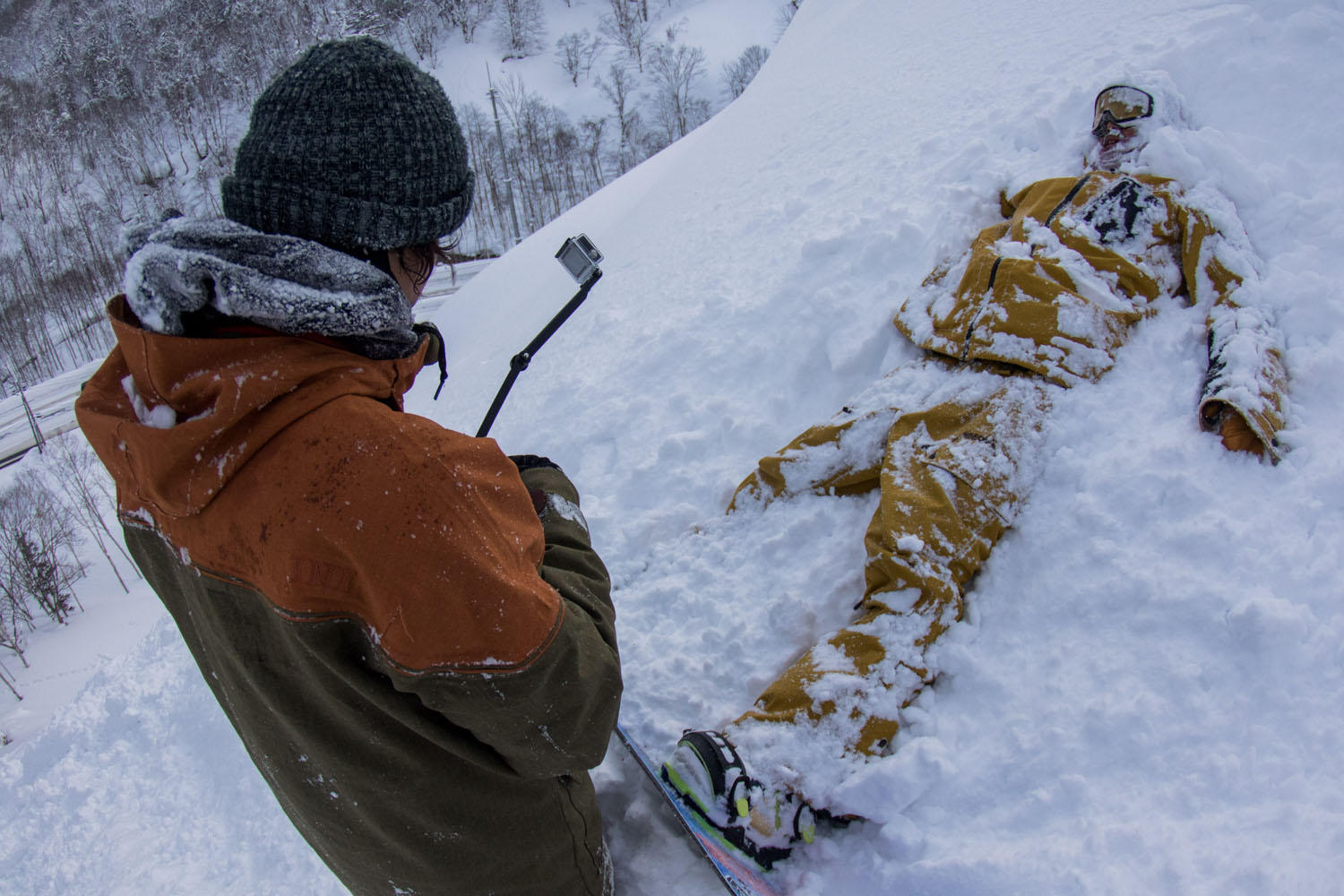 The sunny forecast that we have been waiting for on the last day of shooting.I moved to Kamifurano-cho in northern Hokkaido in search of the best location.This town is an area surrounded by the Tokachidake mountain range and the Yubari Mountains, and is a place where you can see a superb view even in Hokkaido.The morning of shooting is early. Get up at 5 o'clock and get ready.The mountain in the morning is foggy on the top of the mountain, and the whole picture cannot be seen.I am fascinated by its mysterious appearance. "The flow of the wind seems to clear the clouds in the mountains during the day."Start hike in the clouds.While exhaling white breath, step on the fresh snow step by step.Clouds gradually disappear, and mountains that have not been seen until now appear.You can overcome the painful hike-up because there is this scenery that you will never get tired of even if you look at it many times. 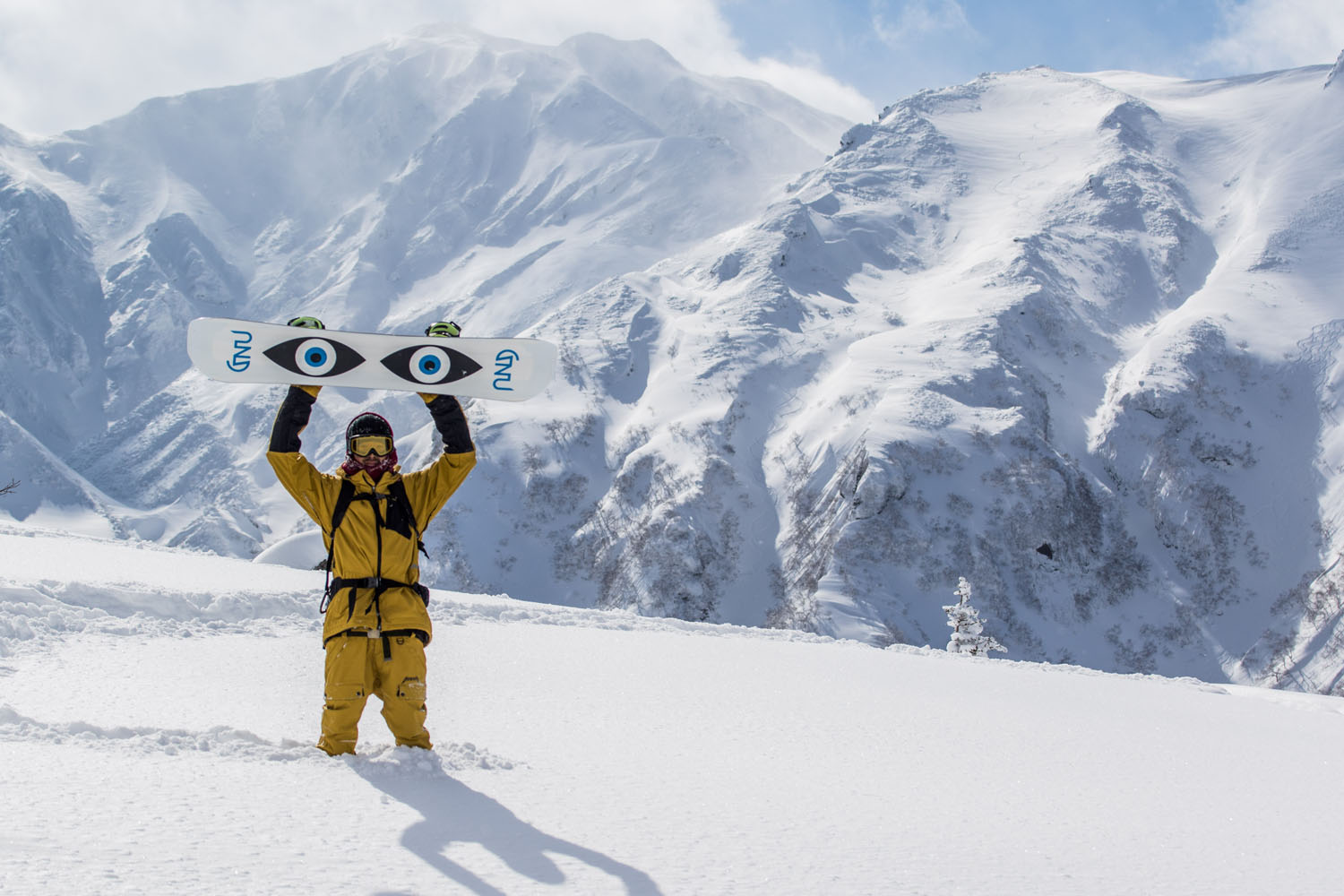 Look at the slopes of the notebook rack and think about which line to go.Hike-up increases your heartbeat and at the same time your feelings. The first is Takanori's turn.Exquisite sunlight shines in and a beautiful spray soars.I am uplifting while releasing the shutter.If you slide down to the bottom, you will scream and high five.

The best one will make you forget the tiredness of several days in an instant.Taniguchi decides Cliff lightly with a tail grab with style.The weather, style and perfection of this one photo have a fascinating appeal.

Every time you release the shutter, you will get a beautiful picture of the blue sky.After sliding down to the fullest, descend the mountain with the setting sun in the background.The sunset seen in the mountains and the sunset seen in the city are incomparably beautiful.Go to a hot spring to heal the tiredness from high five.If you notice, the total distance traveled for 3 days is 600km, and the fatigue of hike and the cold of -20 degrees Celsius are all blown away in the best day.That is THE DAY 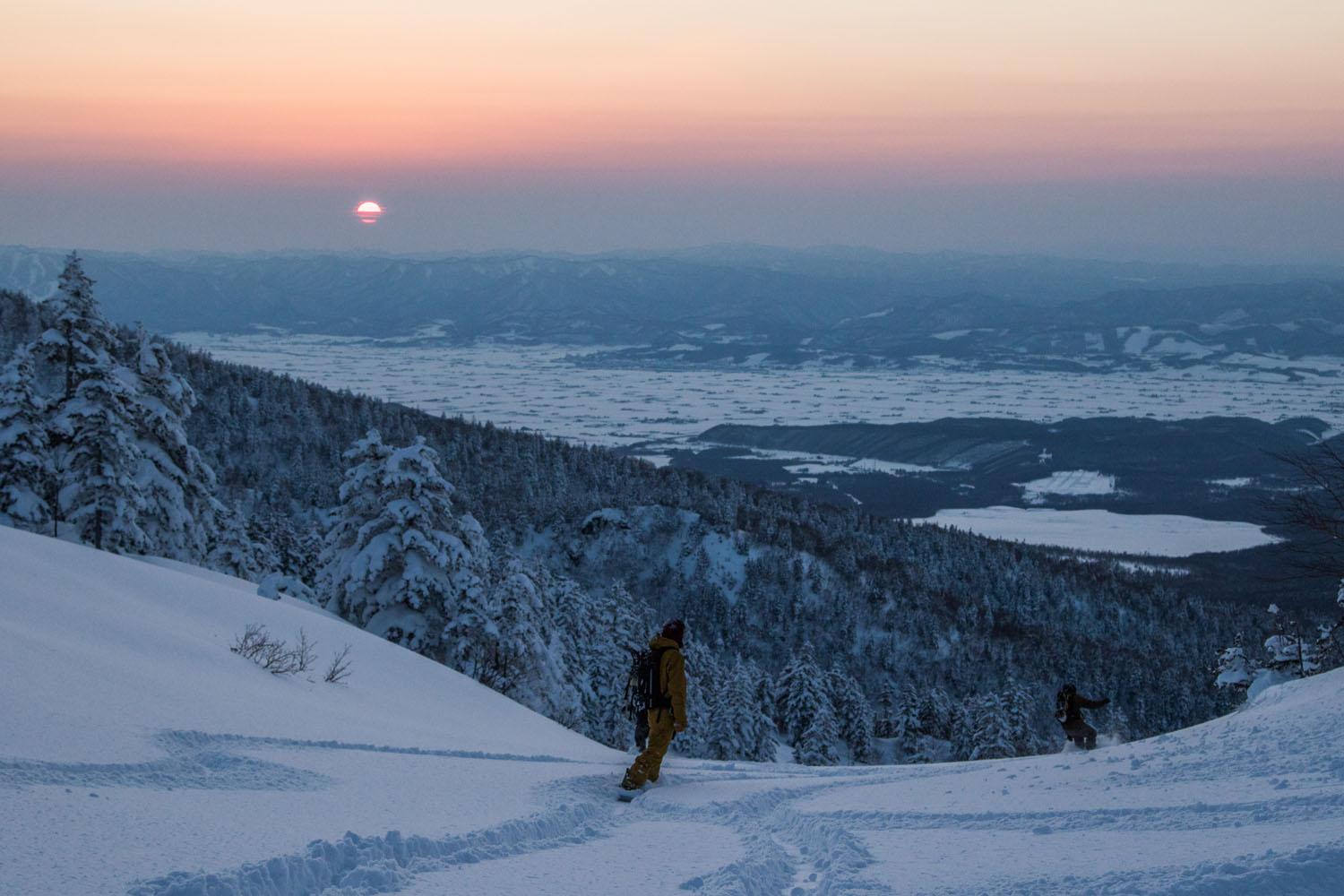 Photographer Gian PROFILE
Bifuka Town, Hokkaido.When I was in elementary school, I was invited by a good friend to step into the world of snowboarding.Longing for Haku Suzuki, a professional snowboarder from the neighboring town, he went on to a high school in Nayoro, where he met his fateful encounter or the crew of the current Mountain Jack.On the first day of entering high school, the name of Ada became Gian by saying "You look like Gian".I have been skating with riders such as Mountain Jack for a long time, so I got a qualification as a physiotherapist if I could care for the rider.In winter, it is based in Sapporo, Hokkaido, and is moving around with a camera in one hand.

I made a snowboard rack with DIY 🛠

A trip from Asahikawa, Hokkaido to Kamifurano

This is the state of Marunuma, which opened on December 12th (*There are two videos...