Rob Kingwill is doing this invitation-only powderboard test drive with the intention of seeing snowboarders as a clan (tribe) and sharing the joy of sliding powder on Jackson's mountains with friends, and it would be better if this community grew up. It is said that people all over the world who will get the board soon will be able to start such a good cycle where joy is shared by having a good ride.A wonderful man.

And at the end of every year, the chief of Tribe is elected at the discretion of Rob, but this year's chief was Mikey (Bassic)!Rob and Mikey have been on good terms for a long time, so I know that too.

It's Powwow after Powwow is over!So

I decided to go to Grand Teton National Park with the idea of ​​Jackson Local Legend Rob when the sunny days were running out for three days.The world behind the ski resort.

Everyone is split, I and Mikey are snowshoes. VERTS is in good shape, but split borders and long distance strips are not good.However, thanks to Nagano, which had a shortage of snow, only the hike came a lot, so I was able to afford it. 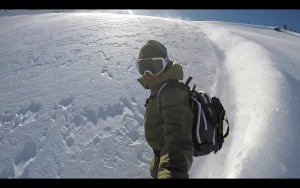 I learned from my surfing teacher MO3 that the waves are the wind.I happened to hear the same words from Tomoko Okazaki, who lives in Hawaii and Japan the same week.

Snow is also the wind.It does not mean that powder is piled up from top to bottom, but it changes the world depending on the terrain, atmospheric pressure, and temperature.In the world below zero, the water vapor freezes and the movement of the air is visible.

Sometimes I find it strange to be skiing on the snow. It is quite interesting to slide and walk fluffy on the snow (XNUMXm above the ground) with XNUMXm.It will be useful when it is time to go to such a planet.

I reached the peak on the route while soaking in the nature of Grand Teton National Park.The southern tip of the Rocky Mountains, where there are so many slopes and cliffs, is a thrilling and exciting place every day.

I wanted to drop a steep slope and cruise the open below at high speed.

Well, right or left, which one should I go? 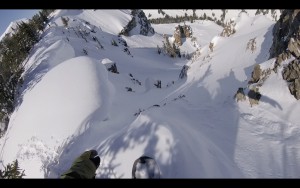 And this time I'm going through Pndora's Arch

Why do people go through? !!If there is an arch, it will ring if there is a bell, so I sometimes try not to do so, but this time I was happy to go through it, and I felt good after going through it. w

This kind of snowboarding is also possible and it's Stoke. Thank you Rob! 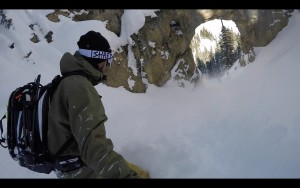 The two are enjoying a deep story