SBN offline edit! !! This time, which is the 5th time, I went to that powder kingdom Niseko Hirafu. Everyone who is almost aging in the snow information of Hokkaido before departure can not help!Against Pow 蒽 侫 訌 ...
Photo & Reported by I-CAR

SBN offline edit! !! This time, which is the XNUMXth time, I went to that powder kingdom Niseko Hirafu. Everyone who is almost aging in the snow information of Hokkaido before departure can not help!Anti-pow 蒽 侫 訌 ...

At 06:55, Haneda gathered at a finely chopped time. SBN members who managed to reach the airport while rubbing their sleepy eyes. mosquito!You guys!

Gee! !!Maybe I can't land because it's snowing too much ... I just want you to return to Haneda! !!
Anyway, in this situation, these people who are sleeping in Garger are ...

It was good! !!As expected, ANA (?) Landed safely in Chitose. What a hell, it's sunny, Chitose!Once you arrive, take a private direct bus to the mountain of Niseko with plenty of room for one person! !!While looking at the beautiful Lake Shikotsu that most of the way missed, take a break at "Roadside Station" where there is a 0 million yen toilet (?). The bus arrived safely in front of the hotel "Hotel Nisekoscot" this time, so I checked in with haste, changed my clothes, and gathered in front of the entrance.

I can't help it anymore!

After all, I used to sprinkle powder every day, so the camera stayed in the coin locker all day. It goes without saying that somehow cameramen who didn't have a camera appeared in the tree or under the line, so this is a report. It won't be
Only!As everyone knows that the SBN staff is not dented to this extent, let me introduce a part of the "heart image" of the cameraman Aikawa! !!

People who hike up silently in a snowstorm

SBN members screaming in the tree

The nose is taken and it gets stuck

"Image of the heart" photo by aikawa

How was it!There are so many "heart images" that I can't show you here. It's a pity that I can't show them all! !!・ ・ ・ From the next time, I will turn the camera firmly without being overwhelmed by bad weather. I'm sorry ...
But you can imagine how much fun it was and how much you could trip. Everyone sprinkles a spray and then slides down at once with a strange voice. This time, next time, another time, one more time, how much time did you spend in that mountain? It ’s pure white. It ’s a really amazing mountain. 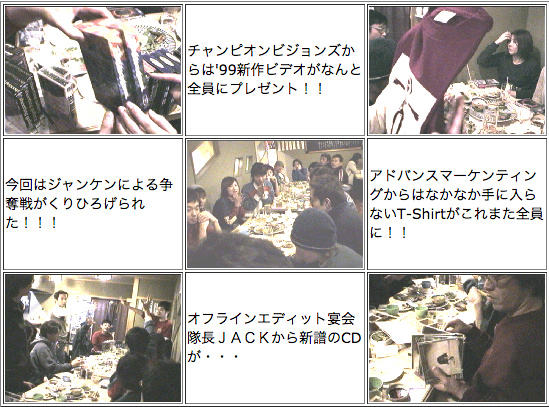 The venue (?) This time is a tavern in "Hotel Niseko Scott"
It was very convenient because I didn't have to bother to go outside (naturally)
Thanks to the sponsors, we have a great selection of gifts this time as well.
In the SnowBoard video, the '99 new video from Champion Visions, who has nothing on the right, will be given to all participants, and the rare T-Shirt from Advanced Marketing, who is familiar with GNU, LIB-TECH, will be given to all participants. Present! !!
thank you!All the participants are overjoyed! !!
And a new CD from the banquet captain JACK!Thank you JACK !!
Finally, SBN gave everyone a rare sticker and a rare old video.
Next time too! !! !!

I'm done ...
Fast, too fast It would be nice if the day was about a year long only while I was in the mountains ... That mysterious time, the deeper the trip, the less I want to go down the mountain It was a wonderful Shooting Gallery full of powder.
I am very happy to spend these three days with you. Thank you to everyone who participated and I would like to express my sincere gratitude to all the sponsors who made this wonderful event a success.
And finally, thank you to Niseko's wilderness for generously enjoying these wonderful three days.

Next is Sapporo International! !! 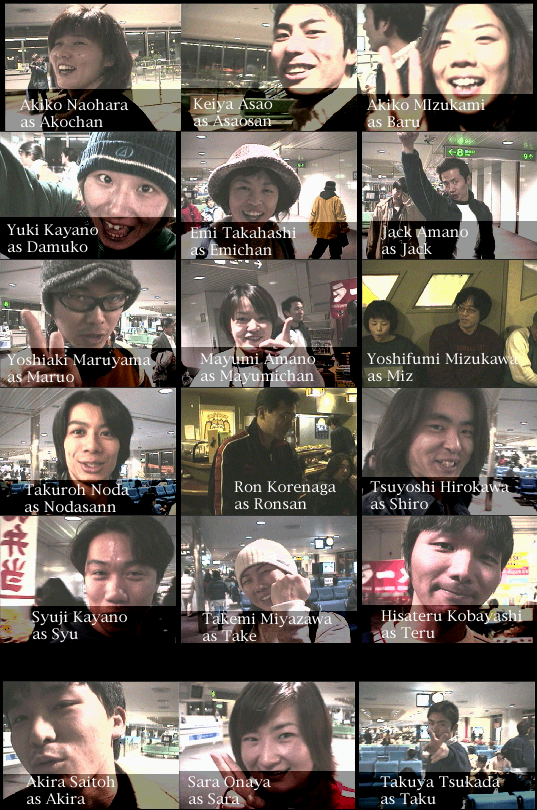