It's been another month since the Kirara camp was over,
It was such a fun 3 days that I watched photos and videos almost every day. 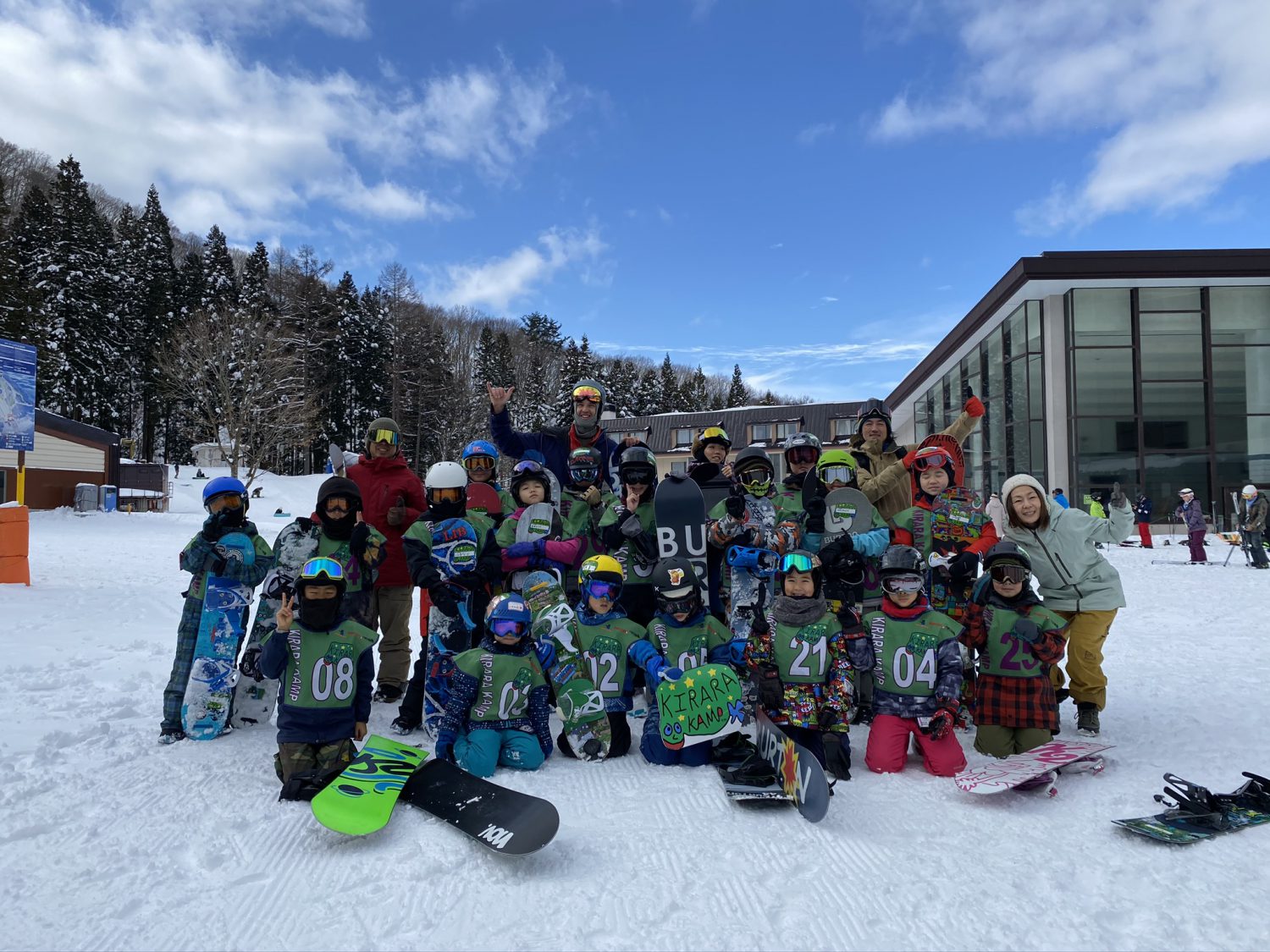 First of all, following last year, I was blessed with snow!I wonder if it goes well with Tangram (laughs).
The best conditions of snow and sunny days from the day before the camp. On the 2nd and 3rd days, I went to Madarao Kogen and enjoyed the tree run. 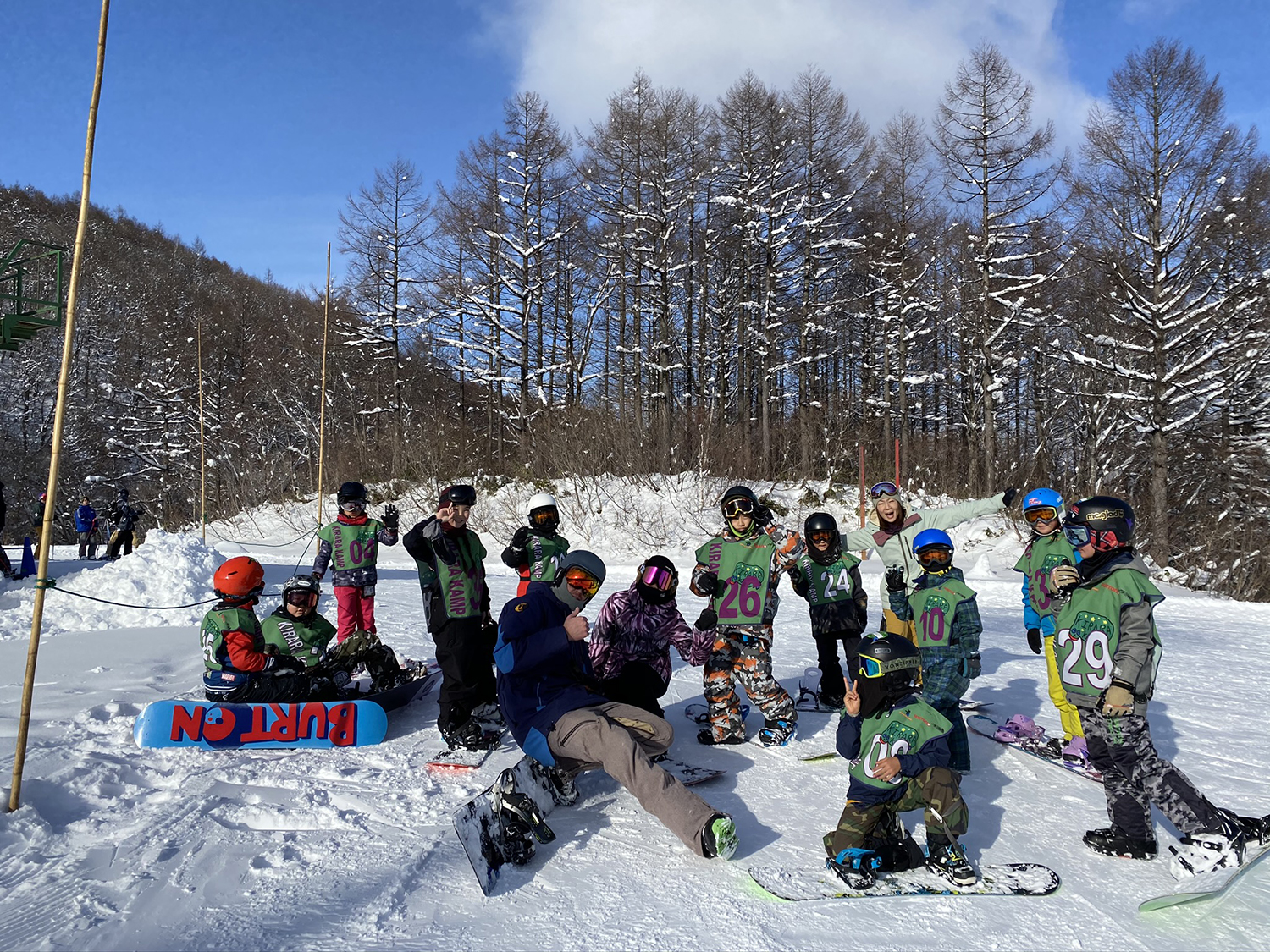 There are several tree run courses in both Tangram Ski Circus and Madarao Kogen.At the entrance of each course, there is a sign with the difficulty level and notes, so you can check if you can bring your children.The courses I entered are "Sawa Course II" and "Bear Course".There were swamps, there were natural jumps, and the children were crazy and their eyes were shining!The courses other than the tree run were also wide, and there were many courses with steps, walls, and lots of natural terrain play! 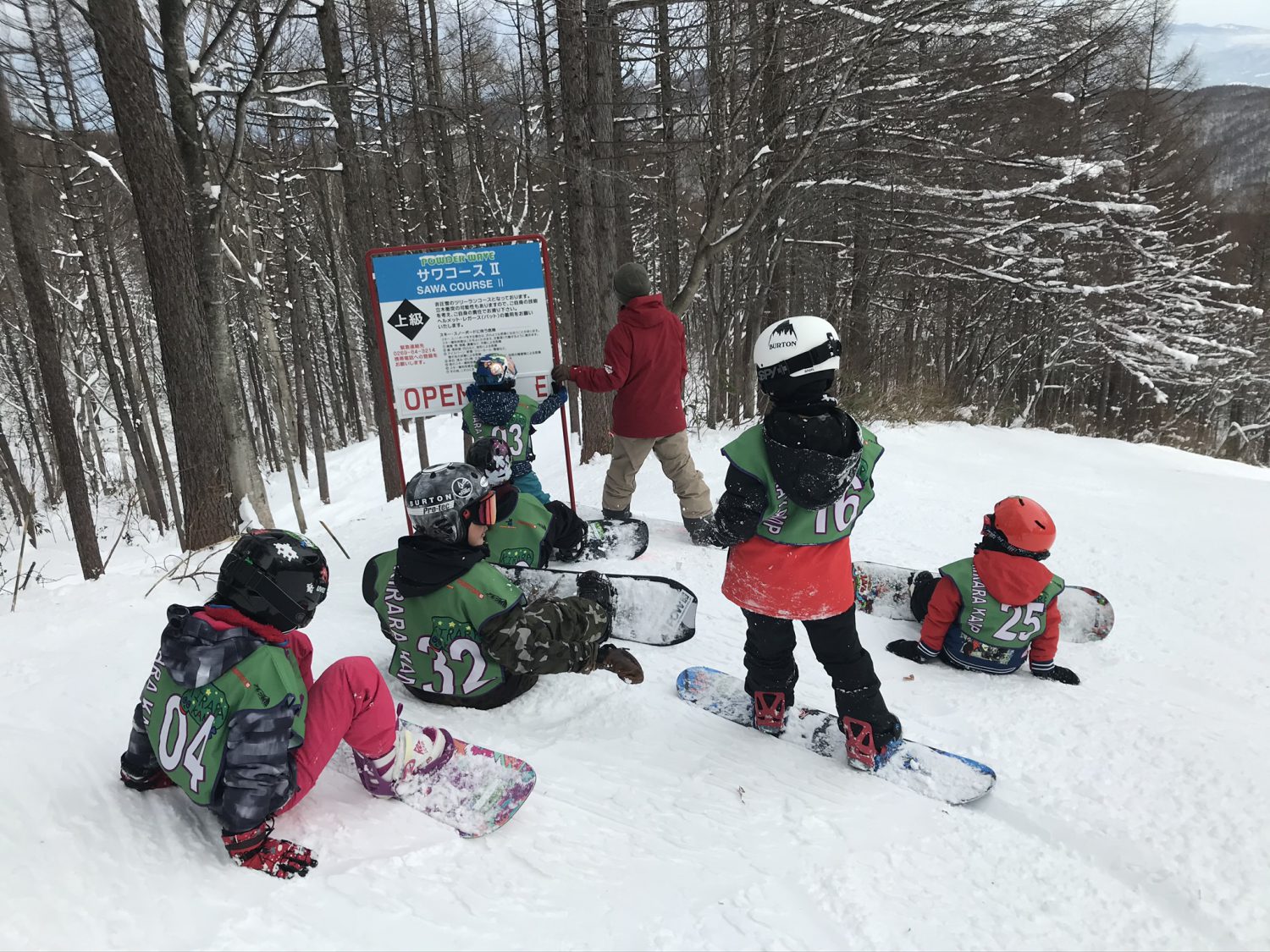 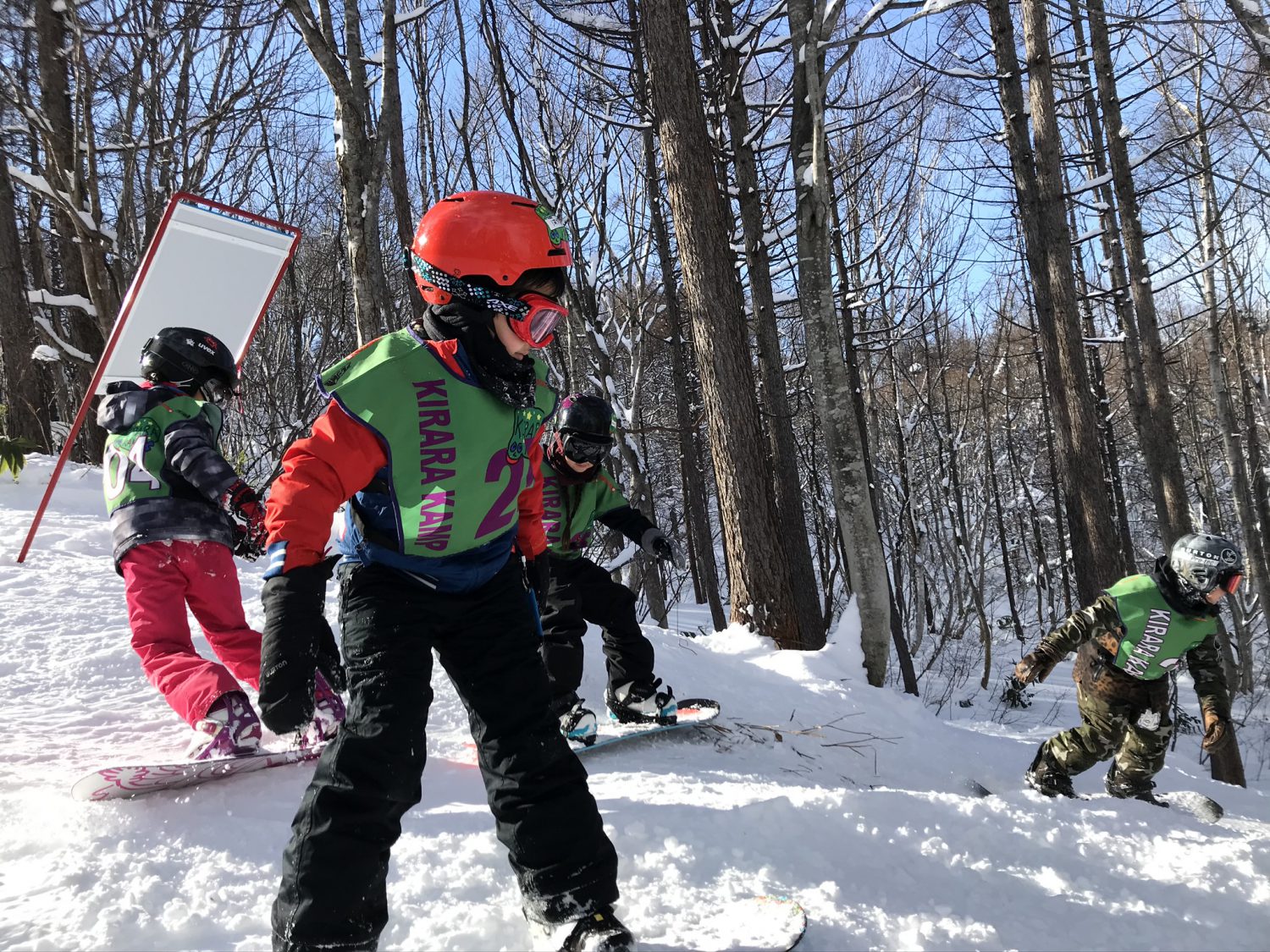 The model for Kirara Camp is Whistler's free run.Even if I recall my own experience, I think that playing in natural terrain was the key to improving.Unlike the jump of the park where the start position is fixed, there is a lip, and it is easy to fly, in the natural terrain, the start position, the direction to fly, the timing to jump out, and the way to play are free.I think that thinking about how to play and how to jump has already led to improvement and growth! 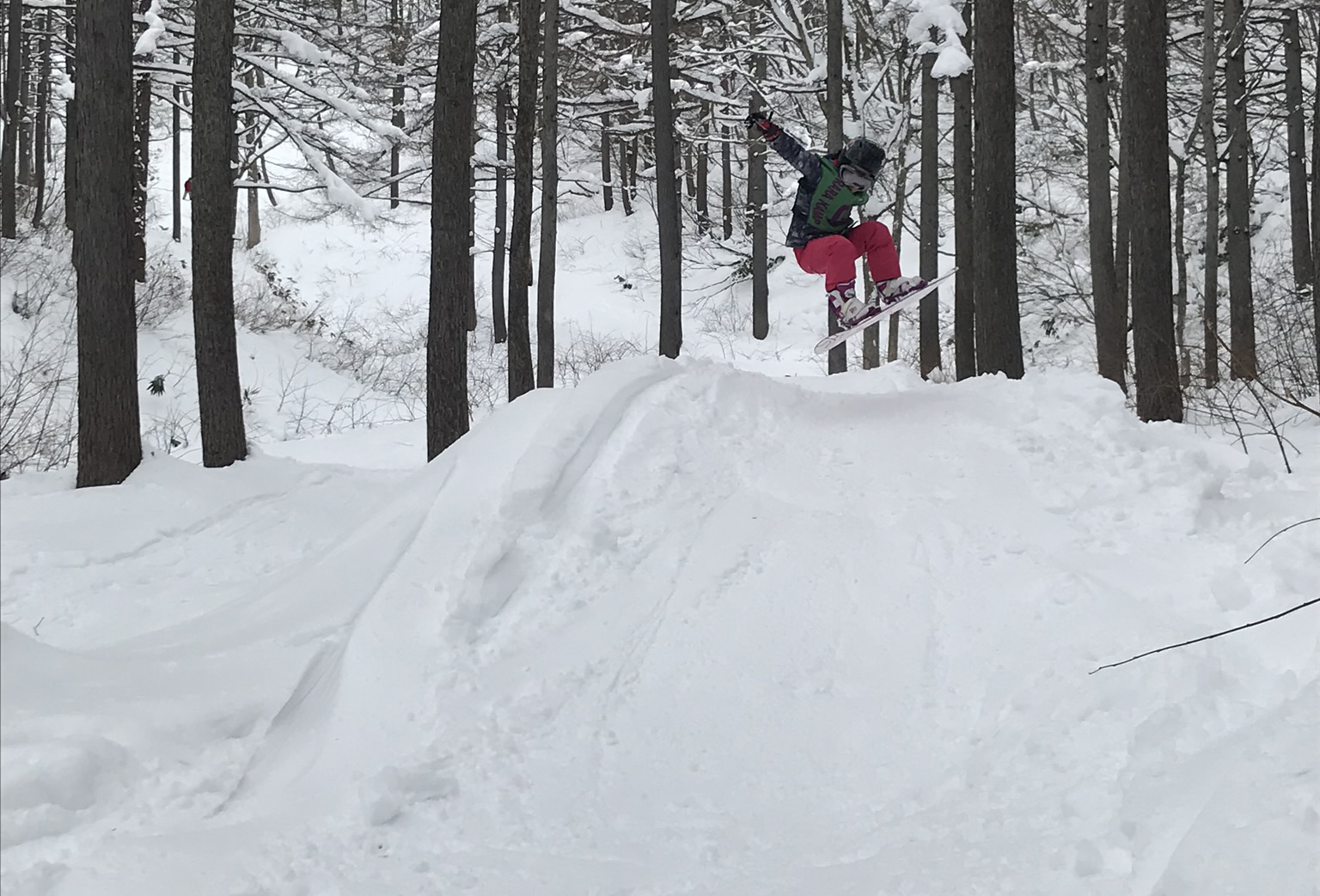 And the coaches in charge of snowboarding were also great!
Goro Komatsu, a professional snowboarder I met in Whistler before I started snowboarding.
While he was busy, he participated as a Kirara camp coach for the first time in a long time!I followed Goro-kun among the children, but the old Goro-kun is still alive!The slip was light and I fell in love with it!And Yuya Nakayama, an all-mountain border who is familiar at Kirara Camp.A master who enjoys snowboarding anytime, anytime.From Kirara camp graduates, Mimo Murai is a professional sand.I've been taught a lot since I was little, and the lessons of Mimosa, which I started as a teenager, are kind and fun!Snowboarding love is more than anyone else!And American Seth McAllister also participated as a teacher.He was mainly in charge of the turn learning class while mixing English!If these teachers join the wonderful course of Tangram & Madarao, it will surely improve and grow.Of course, on the third day, everyone went beyond themselves! 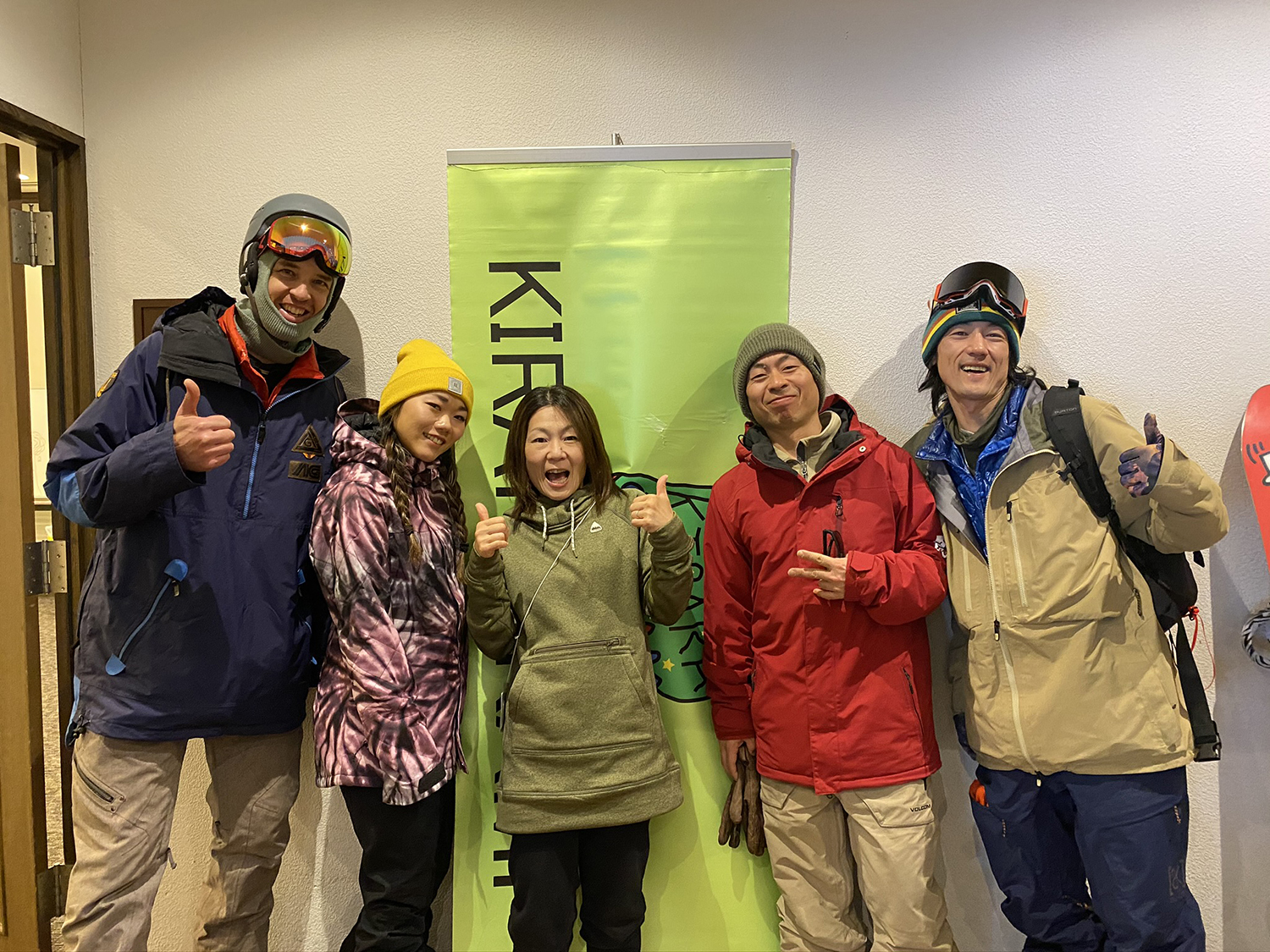 Rina Wakayama from Sports Club Renaissance, and important friends Hannah McAllister and Makiko Aoki participated in the room!Mr. Wakayama made full use of the know-how of the sports club Renaissance, watched over the growth of children in terms of life, and carefully promoted their growth! Hannah is a veteran mom with five children.For children who are excited and do not want to sleep, they watched over the children in a unique way, such as reading a picture book in English!Mr. Aoki also spent his life and snowboarding with the children!It's fun to see different faces of the children at the hotel and snowboarding! 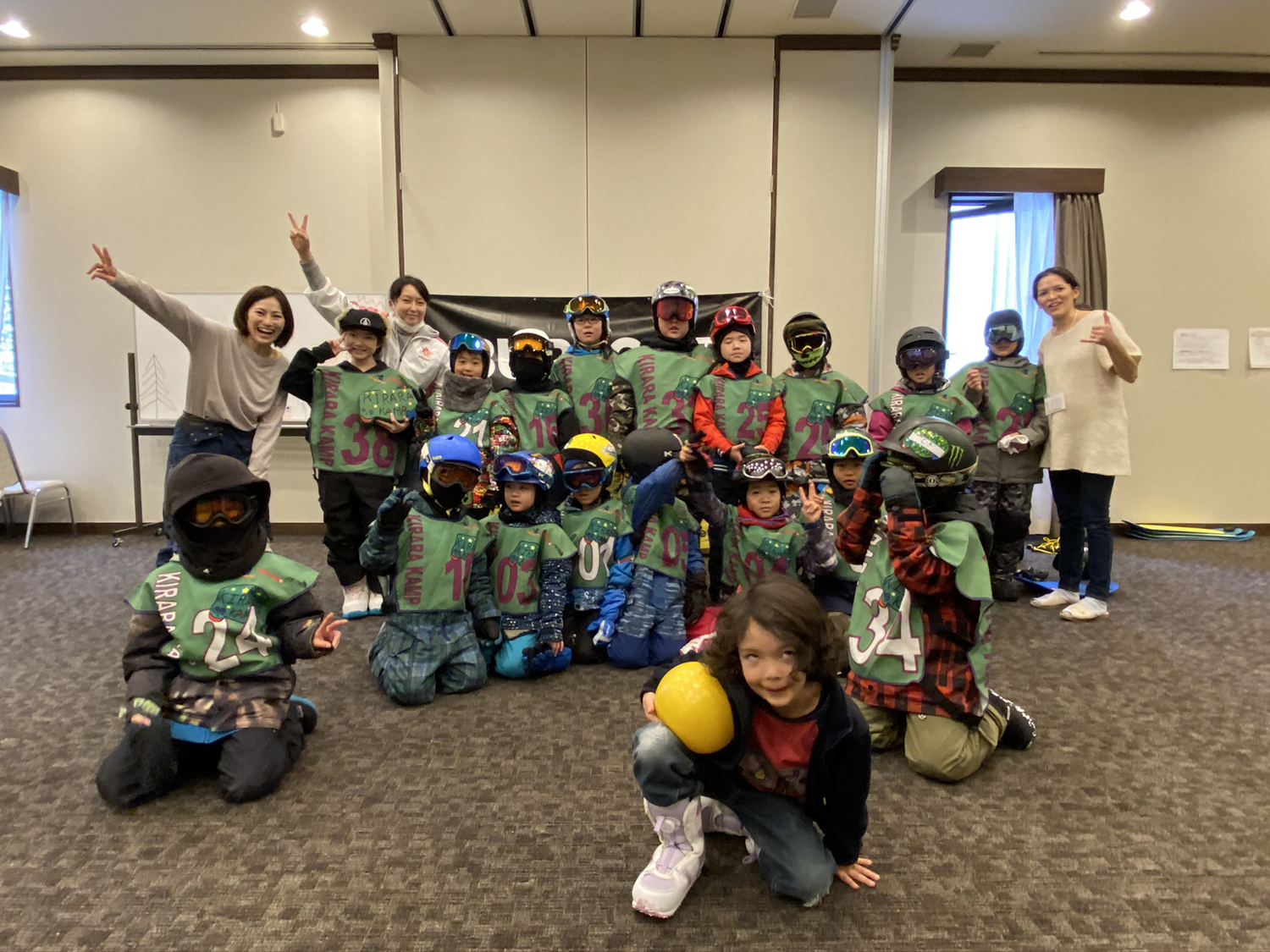 And this time, there were lots of programs other than snowboarding.
On the first day, Goro Komatsu, the representative director of POW JAPAN –Protect Our Winters Japan, talked to the children about environmental issues.On the first day of the camp, I thought that some children would slip a lot, take a bath, have a fun party after eating dinner, and fall asleep on the way, but many children enthusiastically listened to Goro-kun's story and asked questions. I was there.To be honest, I was really surprised. 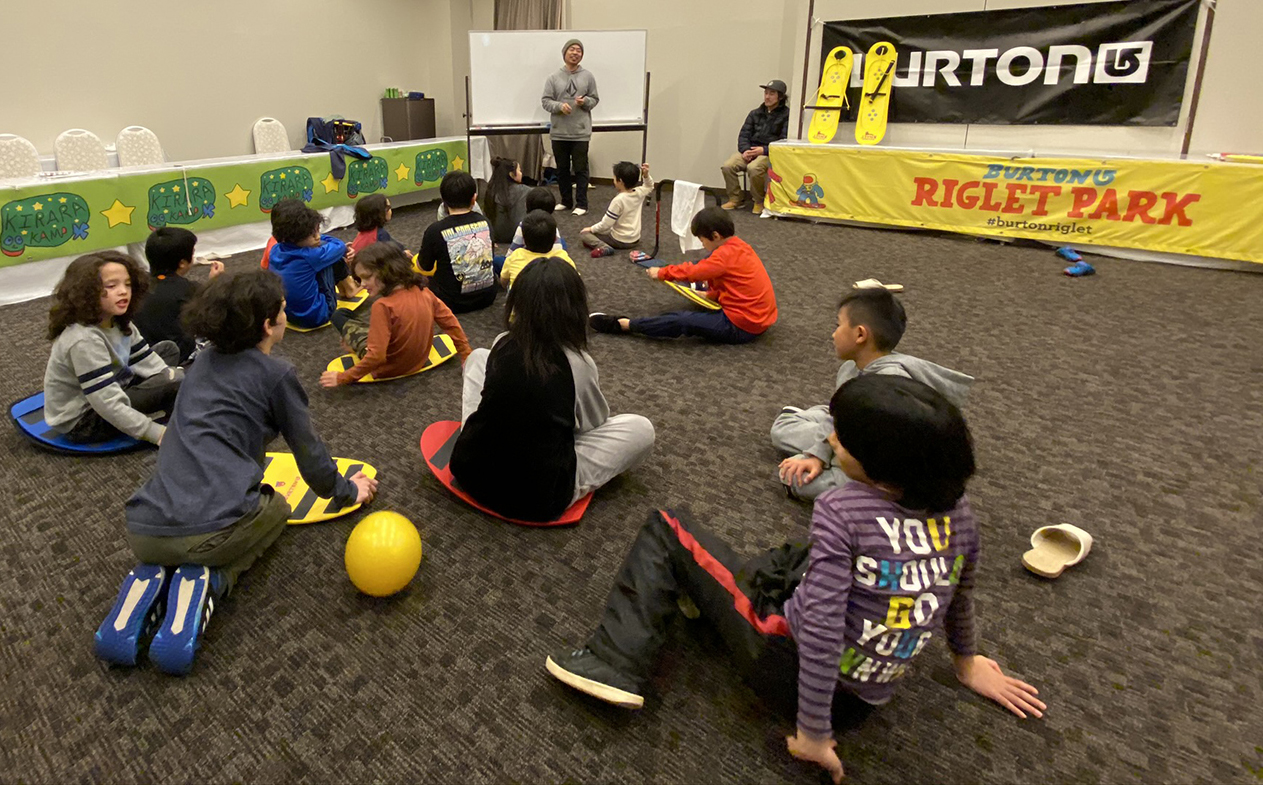 The last word of Goro-kun was the most memorable. "You are the protagonists. You are the ones who will create the future of the earth. Separate garbage, turn off the lights, do whatever you can, take action from what you can do!" It's hard to cause, but if you say that you can do even small things and that it will change the earth, you will immediately feel like taking action!I am deeply grateful to Goro-kun for conveying an important message to the children! 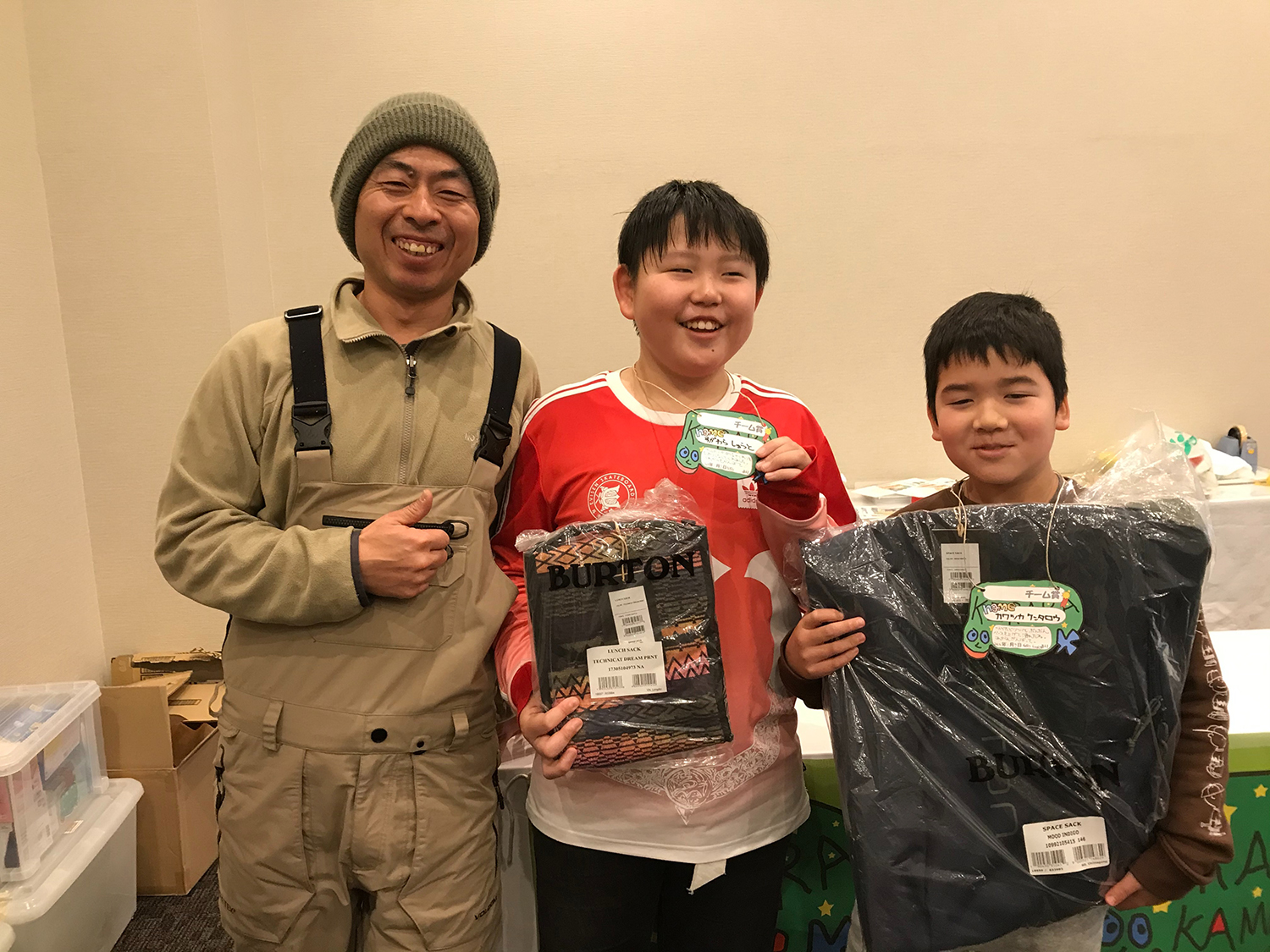 In the program on the second day, Seth became the leader and experienced BURTON's PE (Pysical Education) program.We completed the mission while helping each other with each team while utilizing several PE kits.I think I was able to learn while playing indoors through snowboarding! 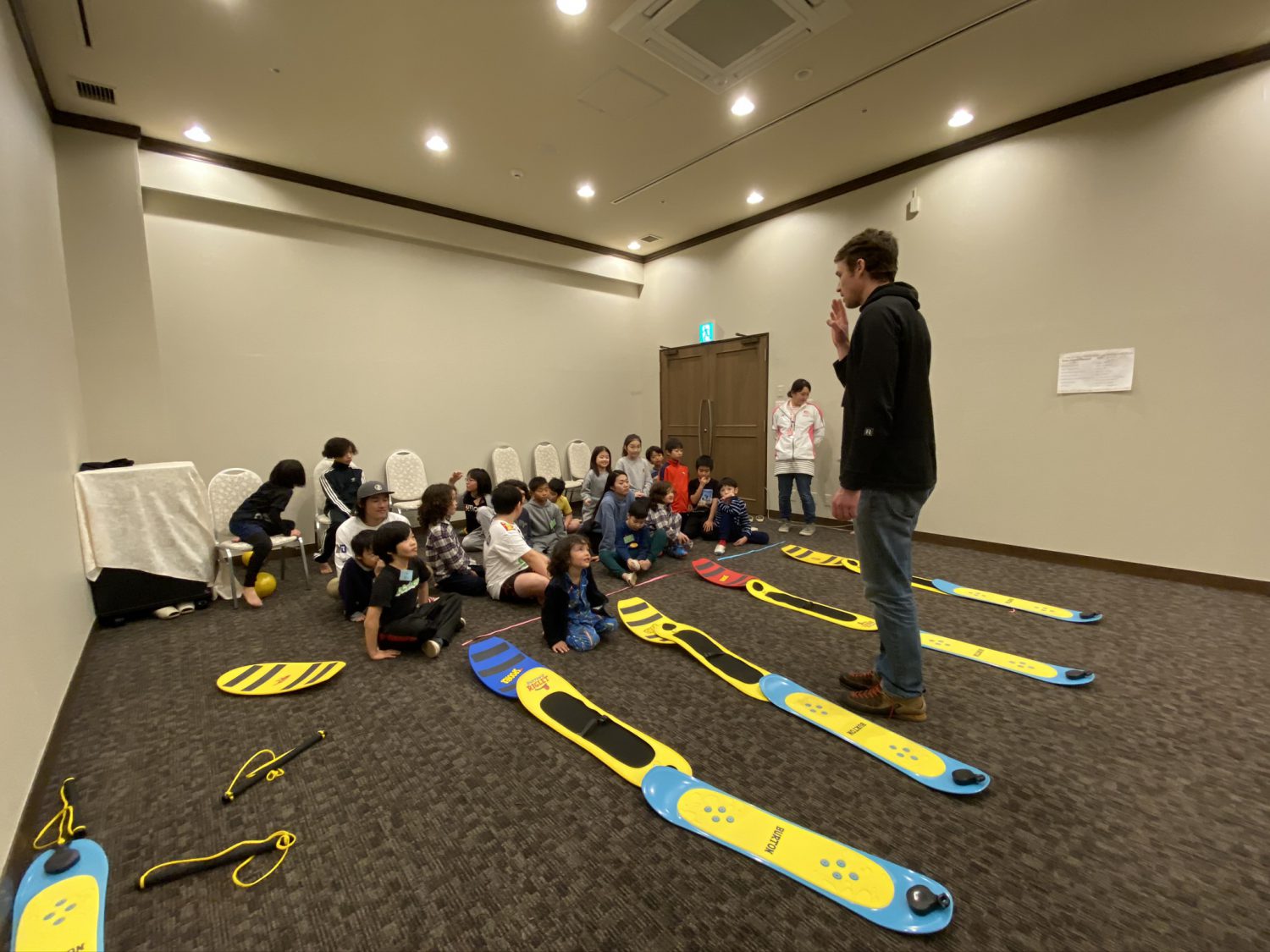 On the morning of the XNUMXrd day, a professional snowboarder and Judo rehabilitation teacher, Mimosa Murai, did a stretch before snowboarding! It's about three, but it grew very comfortably! 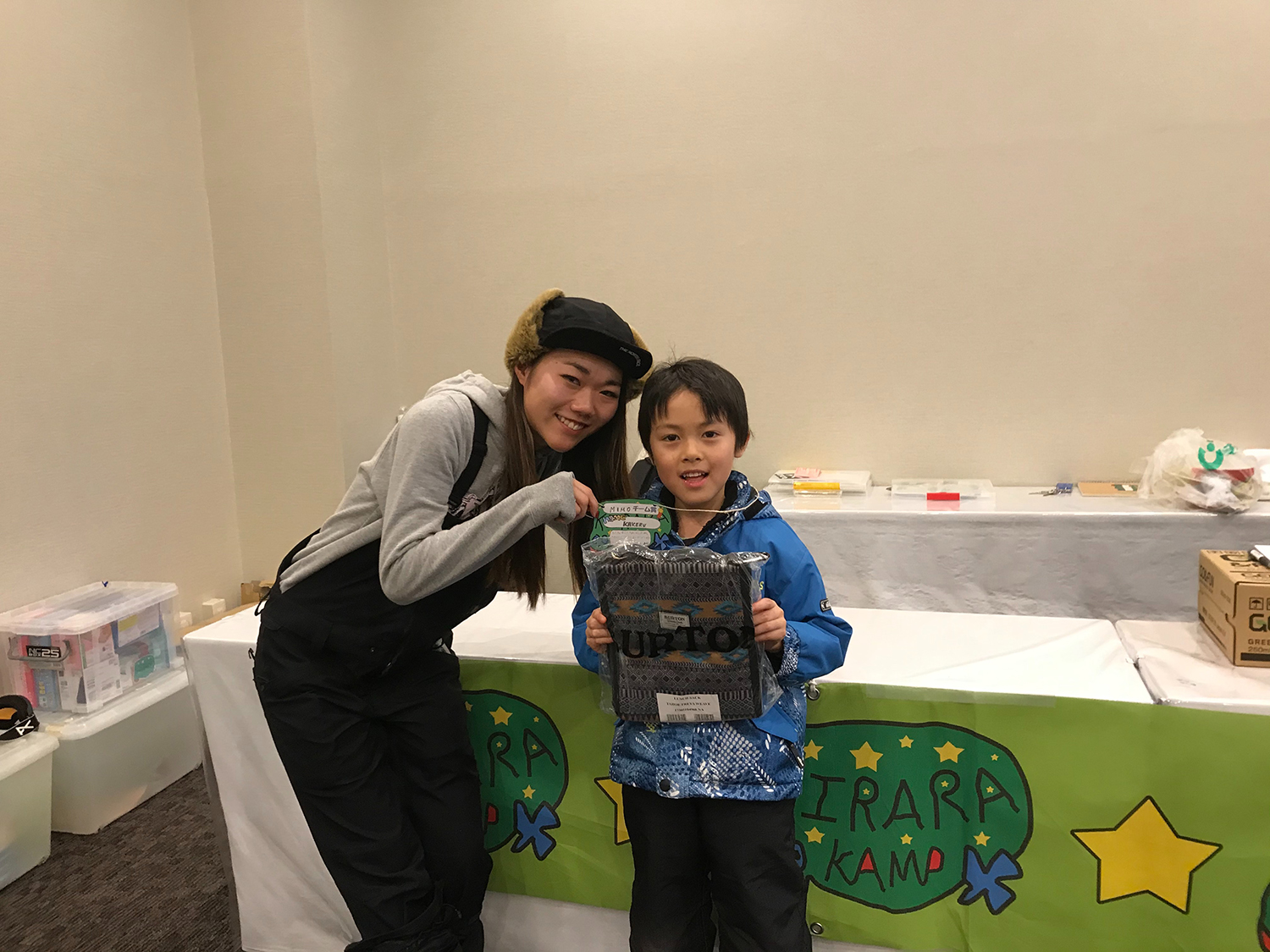 As I wrote for a long time, the food at Hotel Tangram, the rooms, the kids' place, the hot springs, the ski resort, the children, the staff and the coaches were really great! It is an important memory that I had a great adventure with everyone for XNUMX days!Thank you to everyone who participated! !!We look forward to working with you again! 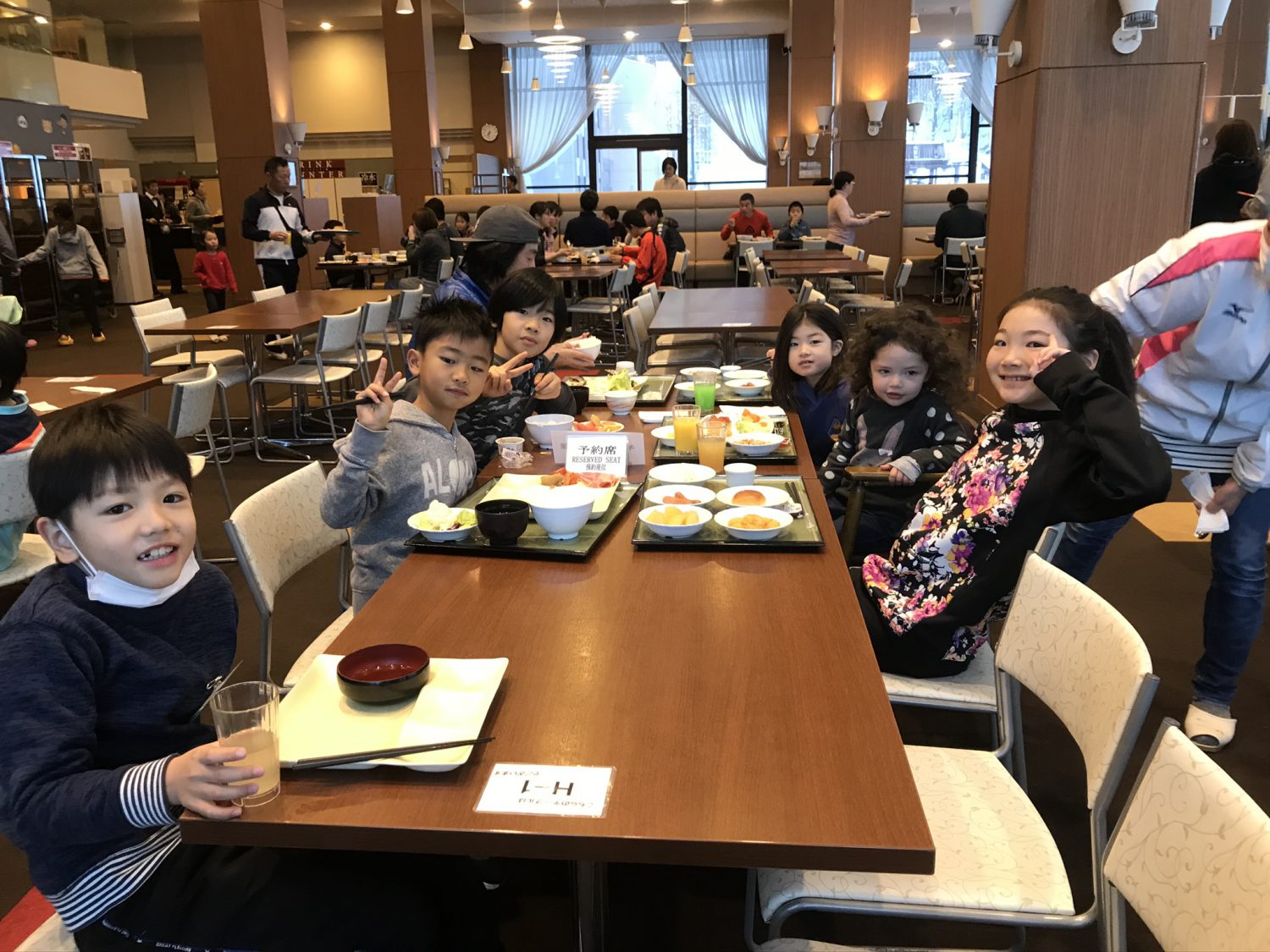 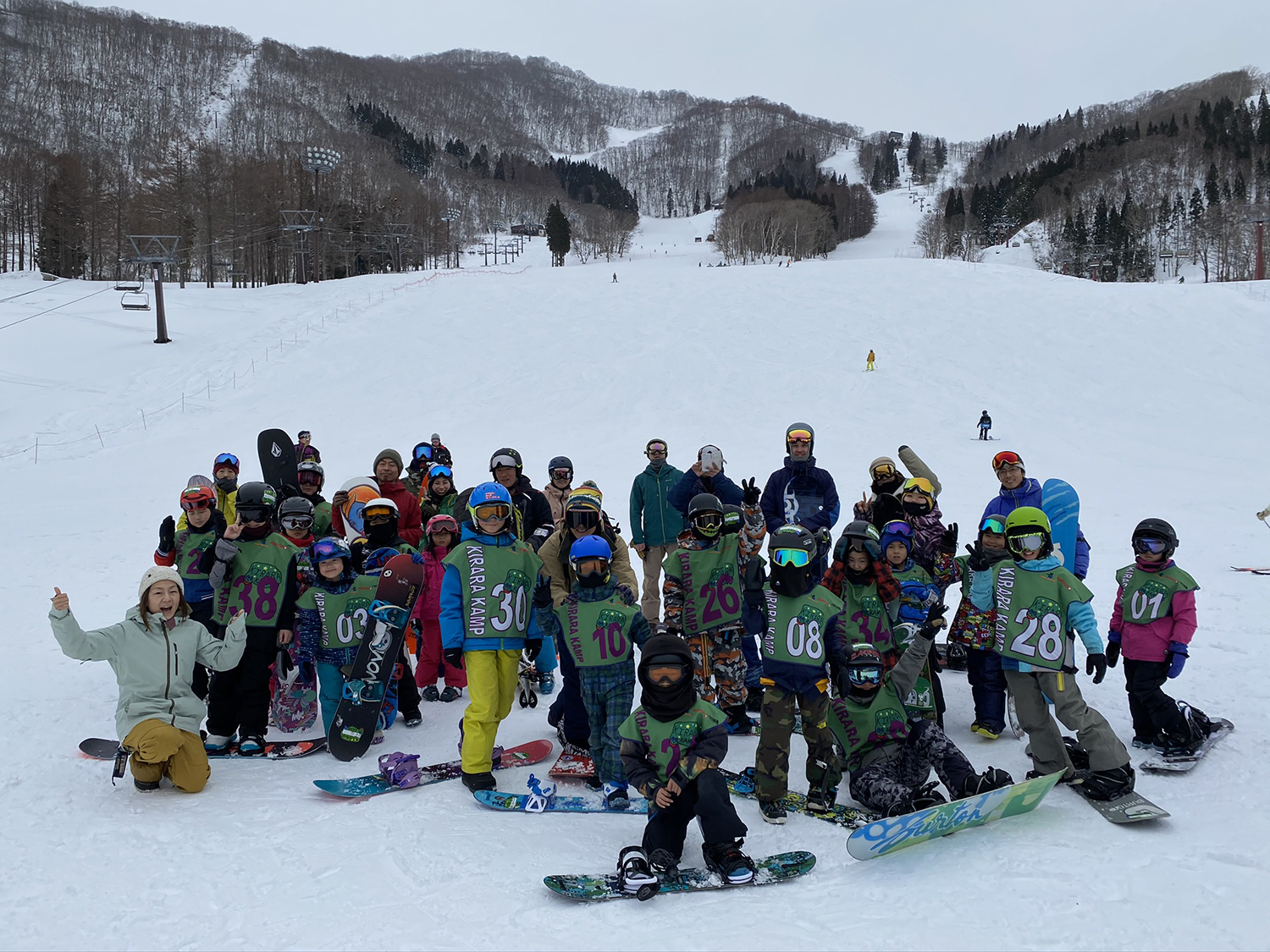