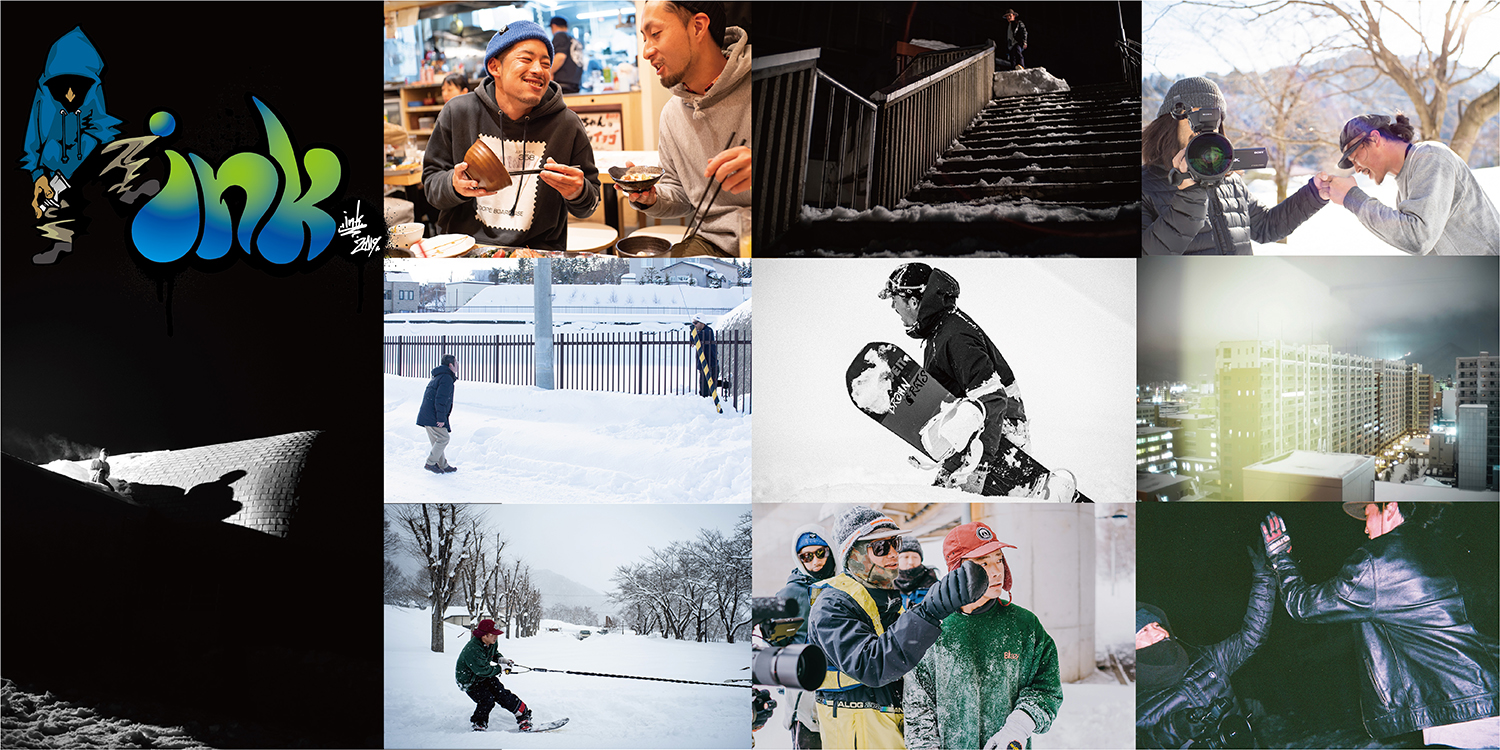 Kazuhiro Kokubo started his own efforts to connect his experience and connections in the movie scene to young riders who will lead the next generation of Japan, and over the course of a season, the INK project continued to take on the challenge of shooting with young people.Until the last time, I introduced the behind-the-scenes of mammoth shooting, but this time I will introduce the behind story of the street unit.
Atwosee, a cameraman of the same generation as them, conveys the atmosphere of street photography and the individuality of the riders who participated.
Photo ＋ Text: Atwosee

Background of being involved in street photography

I usually shoot with Toru (Ishiyama) and PUT (Keisuke Shimakata) from Gunma and Katashina on the streets and on the slopes, but at the DIRTY PIMP preview and JSLV events, including (Toda) Masaki and (Takao) Shouma. , I became friends with the DP crew ... I had a natural friendship with the street-based riders who appeared in INK MOVIE for a long time.Also, in the fall, I visited "SNOW BANK" held in Yoyogi (Tokyo) and "ZETSURIN" held at NOVEL in Hokkaido two seasons ago, where I became acquainted with (Kokubo) Kazu. Was there.So, before the start of last season, Kazu-san directly invited me to "get involved with INK as long as I have time this season."

What the INK project cares about

I first participated in the shooting of INK in Hokkaido in late January.A street team of four people, Tatsuo Takahashi, Masakazu Sato, Takashi Tamamura, and Kenji Igarashi, who had already heard from Mr. Kazu, was in motion.

INK does not belong to any team based on the concept that coolness and individuality are important for images, but young riders who want to play an active part in the future movie scene are gathered.Even from the shooting side, all the members have only the expectation and conviction that good works will remain.

The street team was based in Hokkaido like Koto.With the senses and smell of the riders, we will hunt spots in Sapporo and Otaru one after another. The four are divided into two teams, Ryusei (Tatsuo Takahashi) and Tama-chan (Takamura Tamamura), Massan (Masakazu Sato) and Kenji (Kenji Igarashi) in order to prevent the image from being covered and to shoot more efficiently. He was acting completely differently.

Just as I arrived at Kotomi and was waiting, Massan and Kenji came back from the location scouting.It looked tired, but after all we are on good terms with each other, so the tension is aggravated.After that, chill, eat pizza, play music, and go to a super party.Ryusei and Tama-chan did 2 spots that day and came back in the middle of the night.I remember I was disappointed when I saw the trash that was messed up after eating pizza.

I've been in Hokkaido for about a week, but during that time the riders were always trying to avoid wasting time.In the morning, when you get out of your sleeping bag, prepare immediately and go to the convenience store.Then move to a spot to take a picture, and after having lunch, move to the next spot.I feel like location scouting in my spare time.I set it at night and started shooting early in the morning, often doing more than two spots a day.We used to eat dinner together, but even then, tomorrow we will wake up at what time and decide which spot to go around.Sometimes I take a nap and do it in the middle of the night.Even on off days, the basics are location scouting.During the shooting period, my life rhythm goes wrong, and I don't feel like I'm resting even if I take a rest.I think every time, but it's quite a practice.

The charm of the street

Snowboarding on the street has a lot of underground elements and may be a bad thing for society.However, I know that kind of thing.The risk of injury is high and I don't know when I will get a kickout.Because of such an environment, the shock and excitement of the moment you make up, and the sense of security and exhilaration that springs from the depths of your heart are irreplaceable.And after all, it's cool.It ’s dangerous.That's why I can't stop the street.

Here, I would like to focus on the riders of the street team involved in this INK shooting.

First of all, Ryusei.He is a very experienced rider.So I was in a position to teach Tama-chan, who was working with me, various things while leaving my own cut.

I shot only one spot on the last day of my stay in Hokkaido, but the movement was speedy anyway.It's quick to set up, and it doesn't matter if you use a buff buff lip or not to harden it with water.I've done a lot of attendance so far, so I knew the location well.Shooting also pays attention to the footprints, and if you actually try and do not like it, you will change the trick immediately. I felt that the ability to do various things in one spot was really amazing.And a good voice (laughs).

Next is Tama-chan.A rider who has a small number of words but is polite, has a cute laughing face, and is charming.

It's not that tall, but when it comes to snowboarding, it stands out because you're stepping on the board.I haven't had much street experience so far and have had a hard time.After all, it seems that everything is different between the well-maintained slopes and the streets as they are.However, I was impressed by the way he listened to people's opinions and tried to absorb anything.Above all, I think it was good to work with veteran Ryusei.Oh yeah, maybe I definitely like red (laughs).

Next, Kenji.He's a gutsy rider anyway.I have a strong desire to leave a cut.Also, I eat a lot.

Do you feel a little calm when you talk to it?When I'm down due to a cold, I'm a kind-hearted guy who says, "You can rest in the car until the shooting starts."In Hokkaido, I was entangled with an old man in his 60s while shooting, but for some reason Kenji was told by Kokubo that he was crazy (laughs).Another middle-aged man was talking to me during another shoot. "It's acrobatics!" (Laughs).Mysteriously, the rate of being entangled by Mr. Oji is high.

The last is Massan.I'm one of the closest riders on the street.I've seen Massan's skull in the past.However, I didn't know the location of the shooting in Hokkaido, and I had a lot of troubles, so it seems that I couldn't shoot well.But it was crazy after I came back to Honshu. In February, I shot it in Niigata, where Massan lives, but he himself hasn't been able to move with the professional crew so much, and there were many spots he couldn't do even if he wanted to.One day, I decided to attack the big double-down ledge, but because there were many public facilities nearby, I decided to shoot in the middle of the night.

Even so, there were lights around me, and it was a situation where it wouldn't be strange to be notified at any time.There was no flat part in the middle, and the ledge was triangular ... I was like, "Are you sure you want to do this?"However, maybe I've been imagining it for a long time, the shooting itself ended quickly.It felt like the frustration I had accumulated exploded at once.

What were the INK street team riders aiming for?I don't think I had time to think about that when I was crazy.I heard that the crew shooting in the backcountry of Kazu and his friends left a lot of dangerous cuts.The street troops also move anyway, look for them anyway, and do it anyway.That was it.

However, even if the riders participated in the shooting of INK, I think their original style did not change.Because all riders have their own beliefs.What was different was the height of each motivation.I wonder if I could feel that the flame hidden in my chest was burning even more violently.

Also, what I found out by acting together was that each rider had a conflict and was shooting on the street while worrying about various things.I feel that the number of spots I can't do is increasing year by year for various reasons, but I still think that the riders have snowboards that they want to express, and they are just looking for spots and thinking about it.It's a difficult society, but all they do is crazy.I want you to see and feel them in the main story of INK.

▼ "INK MOVIE" teaser to be dropped this fall

▼ Check the following for other stories related to INK.

INK MOVIE Behind the scenes of mammoth shooting <Part 4> A record of staying in a mammoth with four young people trying to shoot.

Behind the scenes of INK MOVIE Mammoth Shooting <Part 4> A message from the four people and Kazu, the boss of INK, toward the final day of shooting.

What the competitor Raibu Katayama, who has experienced shooting INK MOVIE, should aim for

Masakazu Sato, whose main battlefield is on the street, is a new K2 board ...