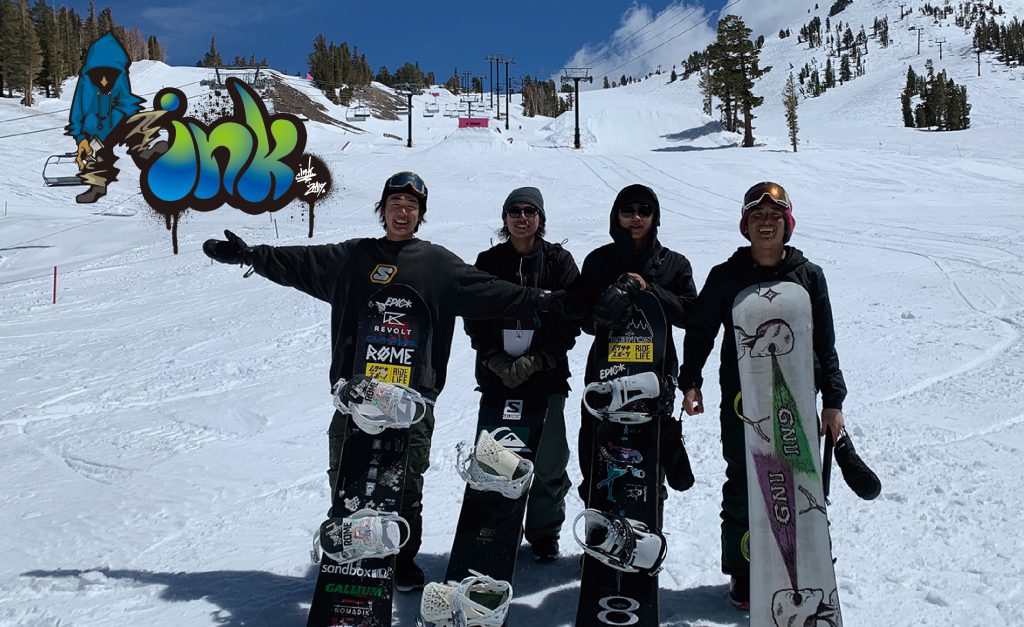 INK MOVIE, which has been a hot topic since last season and will be dropped this fall.In this project, Japan's world-class rider Kazuhiro Kokubo started to move himself to connect his experience and connections in the movie scene to young riders who will lead the next generation of Japan, and took on the challenge of shooting with young people over a season. It's a continuous crystal.This work must be a new way to dedicate to the next generation snowboarders.Before the teaser was announced, the four people (Ikuumi Imai, Kansuke Otomo, Yuri Okubo, Yutaro Miyazawa) who challenged to shoot at Mammoth Mountain in the United States as the first step to gather further expectations Clips of young riders have been announced.In this article, Yukie Ueda, who spent several days in the field in conjunction with it, tells behind the scenes of their shooting.
Text: Yukie Ueda

<Part XNUMX>So, I have introduced the stories about the individuality of the four of them and the early stages of shooting.And finally, the trip will reach the final day of shooting, which will be the climax.What did they get here?What is the message from Kazuhiro Kokubo, the boss of INK?

The last day is sunny.It was powder day again.Weaver, a mammoth local filmer, first took them to a free run in search of the first snowfall in the morning.After that, when I joined them who moved to the park, they laughed with a nice expression that seemed to be a mixture of tension and uplifting, saying, "It was good snow! I slipped in a good place!"

And then to Mammoth Main Park.

Kansuke, who specializes in jib, conquers the rail items that are arranged at a dizzying pace, and Yuri and Yutaro, who are slipping through all the park terrain in the world, freely fly around among the items scattered around.For Ikuumi, who grew up with half-pipes, the public pipes had already disappeared at this time, and he was lamenting "what should I do?", But he was fascinated by the style with quarter-pipes and kickers.

The appearance of four young Japanese riders stood out in the mammoth park.

The feelings of the boss

We asked Kazu, the boss they love and respect, about the selection of young riders.
"You have to be a rider who wants to see this video part, this guy's slip."
I mentioned the same reason as the selection of riders for KAMIKAZU MOVIE.

"The young guys have seen the tournament footage, but I wanted to see what they would do in other locations."

Kazu, who was originally trying to accompany the mammoth shoot, did not come this time.
"I've been sticking to it during the season. I think they'll do something about it this time."

And the younger ones were still inexperienced in advancing overseas photography on their own.
"If it's a good experience for them, that's fine."

Every time they made a mistake, Kazu said so.And to me
"I'm sorry to bother you."When.

I heard such a word from that Kazu for the first time.
I'm sure he was also discovering something new in the process of passing something on to these young people.
"They will bloom someday. Thank you."
The key to taking care of these four young people this time was a message from Kazu.

When I spoke his words to the four people on the final night, they all shut up for a moment and screamed in joy.

No, even if I'm sure I heard that word, it's still true that these four people did their best with a sense of tension.I was always playful and laughed, and I was sick and hit by a happening, "Yukie-san, we've done it! What should I do?"How many times have you heard that line?So are these kids really nervous?I was wondering.But I felt that it shouldn't be the case when I saw their slip on the final day. 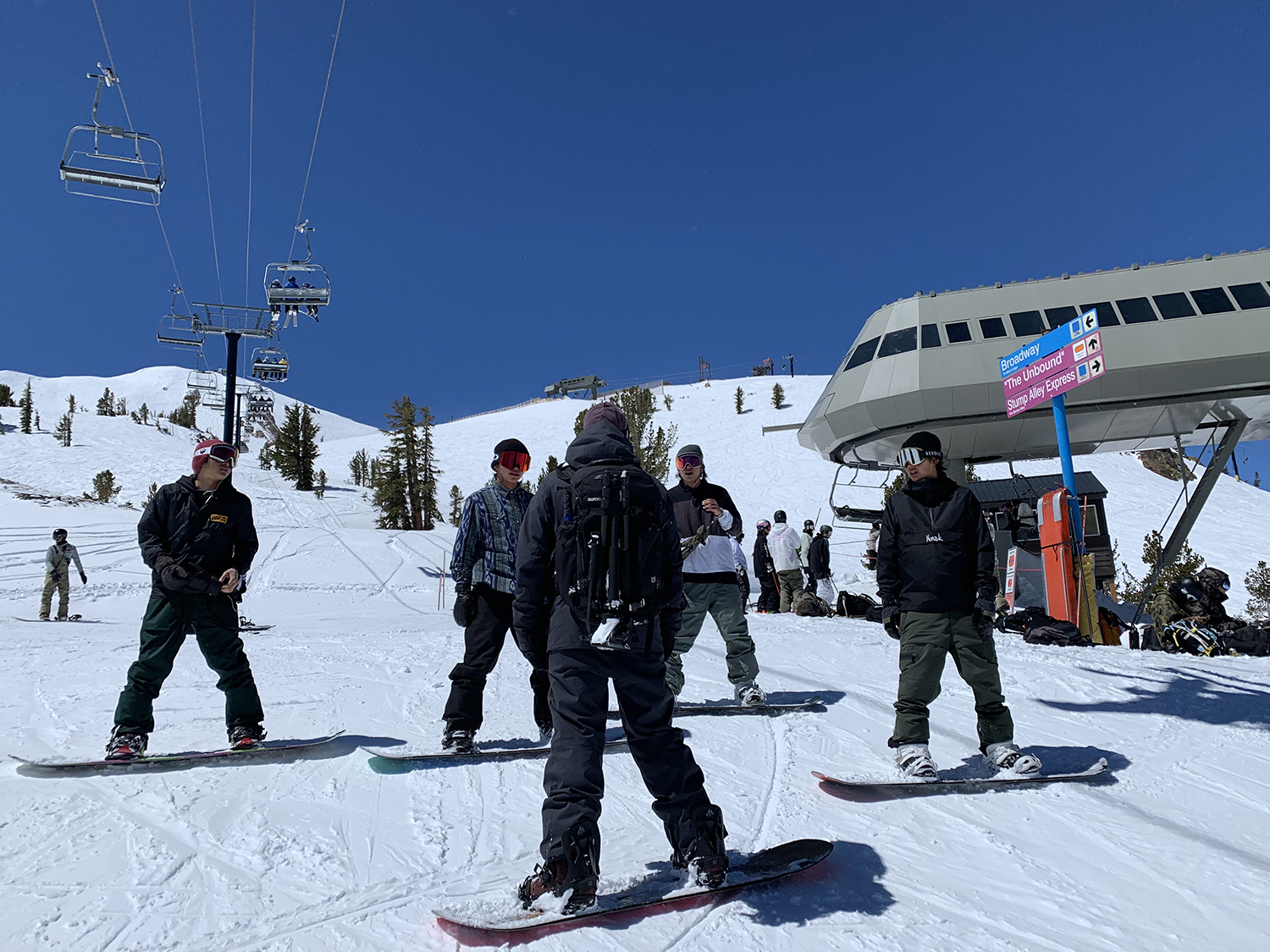 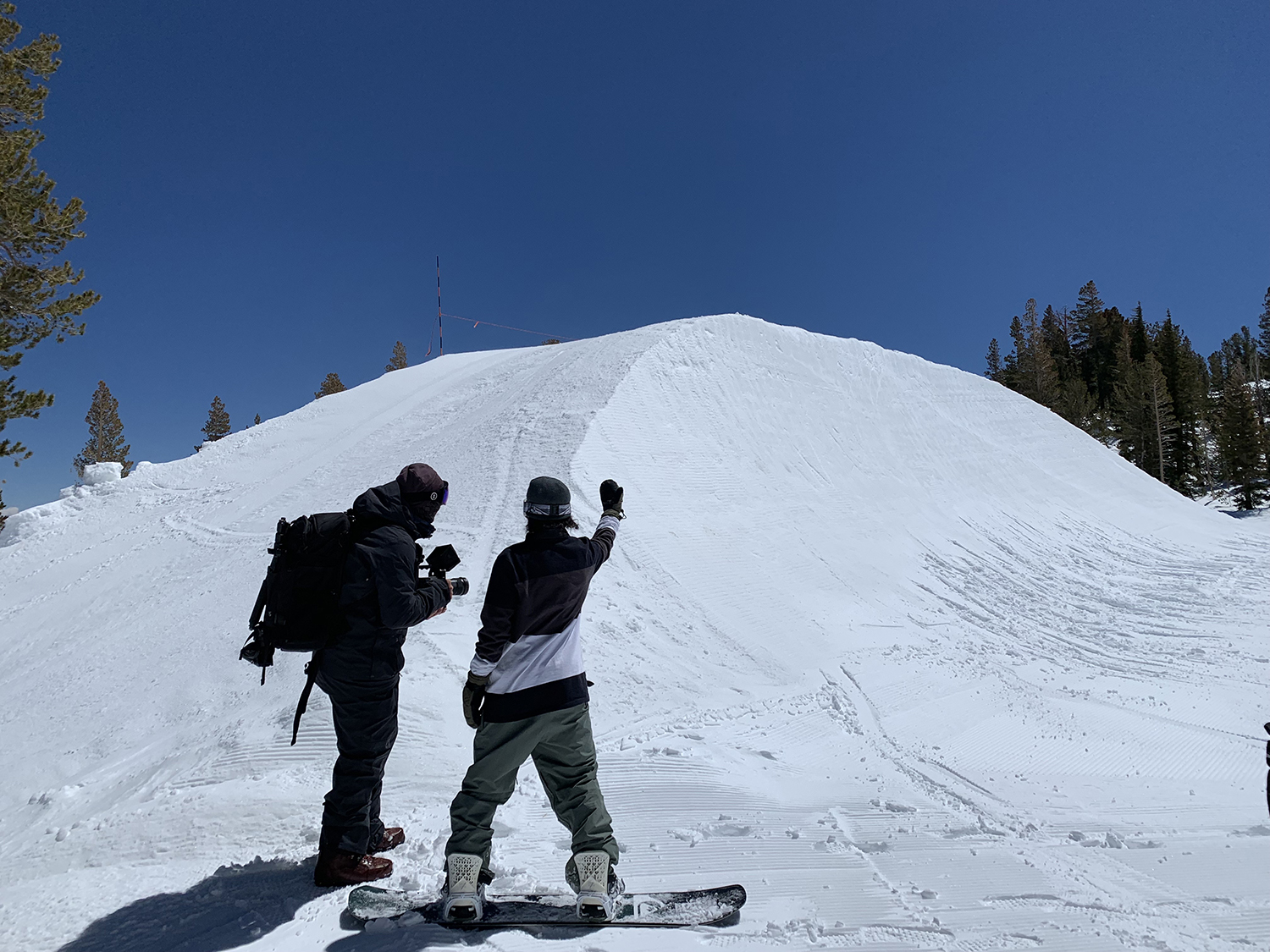 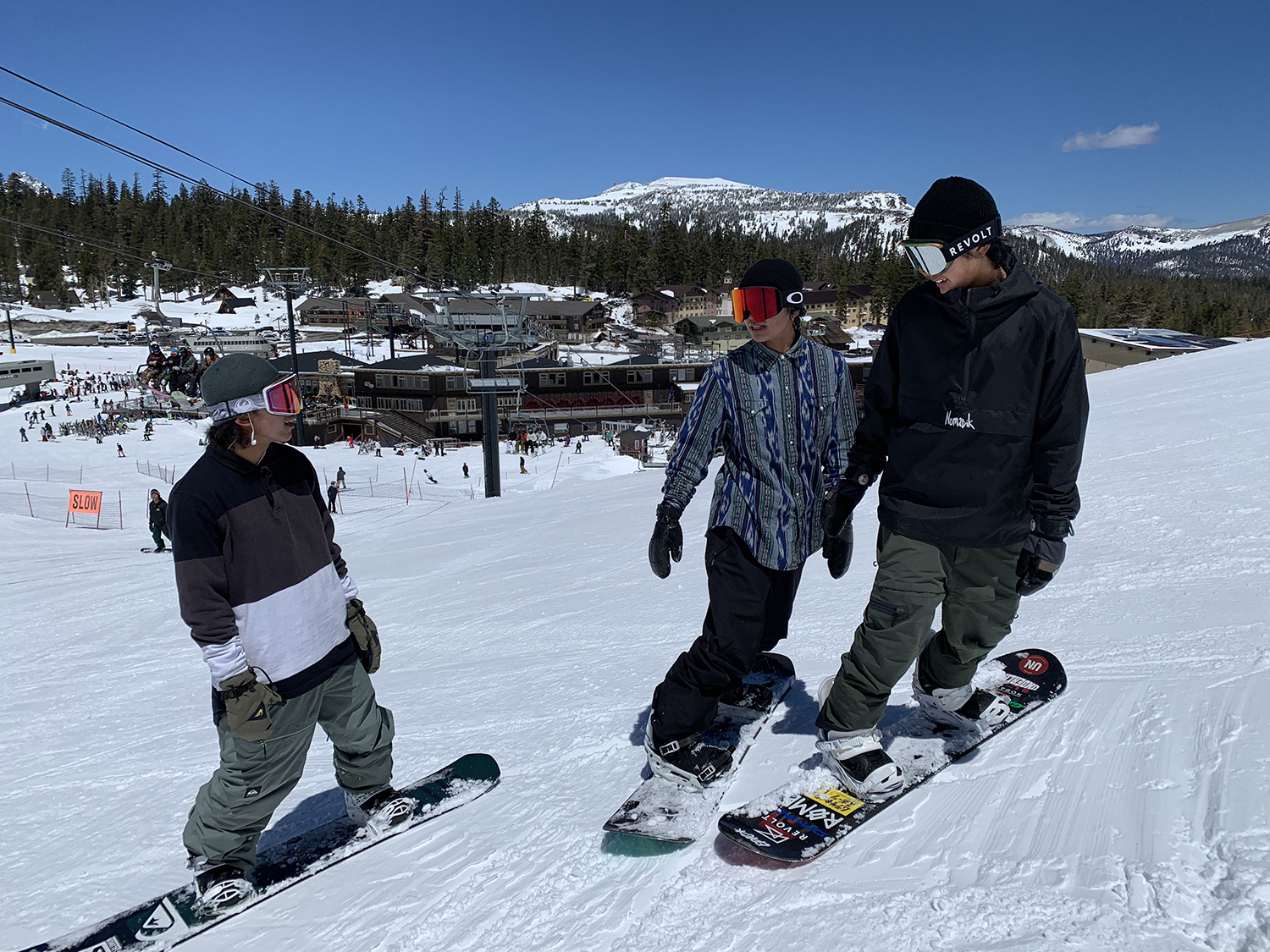 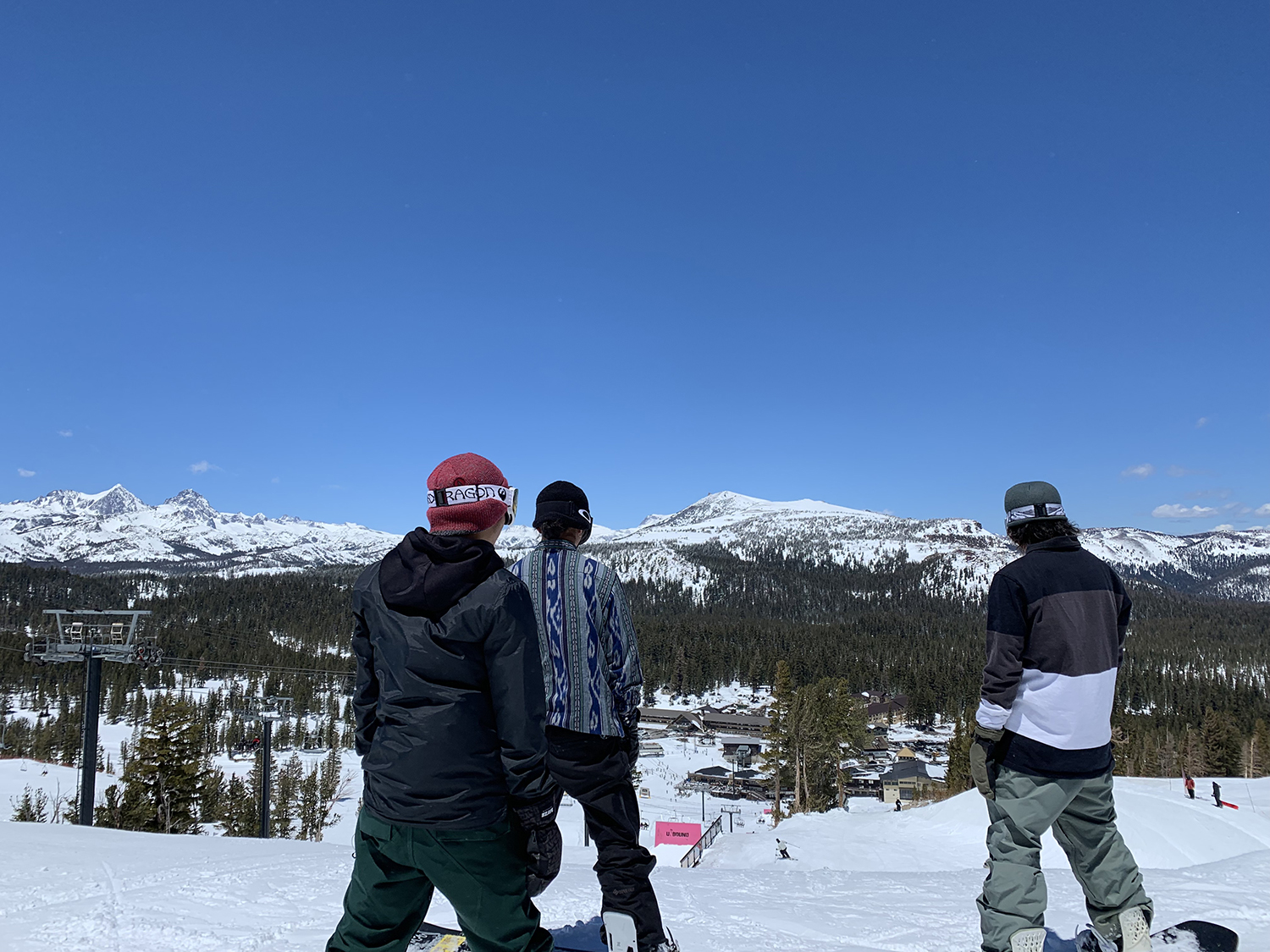 The time limit came and the lift stopped, but they still didn't come down.I kept hiking up and shooting until I was prompted by the patrol.There was also a figure of Weaver who continued shooting while pushing them.

After the last shoot, I asked them who were packing.
How was the mammoth?
"It's so much fun and I don't want to go home!"
"I want to stay for another two weeks ~?"
"If you stay for two weeks, isn't it okay for two months?"
I'm still having a playful conversation.From now on, they will pack up and leave for LA, and when they board the plane to Japan, they will have a sense of accomplishment and an atmosphere of wanting to shoot more here.

Hey, was there pressure or tension?
To my question, everyone had the same expression, "... there was."I nodded so.

Kazu was checking the mammoth weather and wind every day from far away Japan.How much did you care, even if you didn't have many words?I think his thoughts and feelings fascinated the slip and resonated with the hearts of these young riders.

"It seems that the best riding was decided in front of you at XNUMX o'clock in the morning, and you are showing off ..."
It seems that Ikuumi and Kansuke have slipped into the mountains of Hokkaido with Kazu in free riding including backcountry this season.
They witnessed the slipping of their seniors, felt pressured by being scared, and continued to be stimulated.

What you want to leave for the next generation

XNUMX.
Twenty years have passed since XNUMX, the peak of snowboarding movies.The children born at that time have become a representative of this era.I want to keep what came and take over.And there are those who want to go beyond that, and there are those who grow up longing for that figure and skate with all their might in response to their feelings.

I can't help looking forward to what kind of work will be completed.

Snowboard movie.
Nowadays, images are overflowing through SNS, and it is more difficult to see only what you want to see.How many works do you really want to see and are looking forward to?

I think that is the significance of making this work.

▼ This movie is a special clip of INK MOVIE where the mammoth strip pattern was taken by ourselves using GOPRO!

★ Writer of this article
Yukie Ueda
1973Years1Month22Born on the day.Born in Tokyo.Started snowboarding in Whistler, CanadaXNUMXAfter a year of competitions such as half pipe and big air, Garzuru Movie Production “LIL” Launched and led the Japanese girls scene.Moved to the United States on the occasion of marriage8While raising his old son (Toranosuke), he continued his professional activities, and is currently cultivating various fields in Japan and overseas because he is fascinated by the backcountry.2017Years4Moved to Mammoth Mountain, and started a new life with his family more naturally near the mountain.
Sponsor: K2 SNOWBOARDING, Billabong, UNfudge, Ronin Eyewear, NEFF, HAYASHI WAX, MORISPO SPAZIO

Ask QUIKSILVER Japan Rider, this is ...