In the first part, I explored the history of skiing on the street since I started snowboarding and the charm of the street that I have been facing for 10 years.In the second part, we will ask about the activities as an artist, the activities of Dirty Pimp, and how you feel about the Japanese girls scene.
Edit + Text: Rie Watanabe

* This article is a special release of the interview article published in the December 2020 issue of FREERUN magazine (released on November 2) as "STAY HOME" special content.

I only drew what I liked
Through snowboarding, I realized the joy of drawing to reach the viewers.

-In the last few years, there are more places to express with pictures.
I agree.In an environment where my mother was an art teacher and had painting materials at home, I went to draw flowers together from a young age, and copied things I was interested in, such as cups and wreaths.I also like animals and things that heal, so I draw ...I went to Zoukei University and had been doing it as a hobby for a long time, but by being in charge of the design direction of "Dirty Pimp", I hope that people will know about that aspect as well.Thankfully, I am now able to work with illustrations for specialized magazines and sponsored brands.I'm really happy that the collaboration with DEELUXE will be decided next season and the collaboration with UNION will be the third season.Actually, I also made the page number art for this interview page.

-The streets and illustrations all expanded through snowboarding.
Yes!Originally, I entered my own world, hone my skills, enjoy myself, and I was able to complete everything within myself, and I felt comfortable with that.But now, I'm happy that someone is happy to see it, and it's some kind of motivation for those who see it.It was snowboarding that made me realize that it was good for me and good for people.It's a big thing for me that the range of activities has expanded through the people I met on snowboarding.I started snowboarding with a light feeling, but without it I would have been a really lonely life.So I think I realized through snowboarding that it was insanely important.

-When you look at SNS etc., there are many cute illustrations that have a gap with the style of snowboarding, right?
I love being pretty.Animals, motifs, characters from Pokemon to Kirby.However, I want to think that I'm cool from the viewers, so I may not be able to grasp the gap myself (laughs).

-Are you able to balance artist activities and snowboarding well?
I really want to immerse myself in drawing, but when I have to practice snowboarding, my consciousness is quite dispersed and I can't do both.Now that it's an issue, I'm practicing how to spend my time.

-What do you want to do as an artist in the future?
It's still vague, but as I said before, I want people to see it through my work and feel something.I've always been anxious since I was little, so I hope I can heal the hearts of similar people with what I draw.While drawing the world view that I want to draw, I want to work with an awareness of reaching as many people as possible when it comes to design.

Continue snowboarding
All the flow was connected to one

-What are you going to do with "Dirty Pimp", which is also a central rider and also directs design?
I haven't decided yet, but I would like to prepare so that it can be transmitted as a media separately from the project with Dirty Pimp. "Dirty Pimp" is a video crew, and although there are riders who jump in and participate depending on the season, and the members change depending on the season, basically a fixed small number of members are the main, so the rider who seems to be cool I hope I can get involved more actively.The director is DP and I'm in charge of design, but ... (laughs).Even if you have an attractive rider, it's a waste to have no chance or even a way to get to know it.That's why I want to create a place where cool riders like buried rough stones can freely express and be known by many people.I think it doesn't have to be a DVD but a paper or WEB.

-What do you think about the Japanese girls scene?
I'm often asked, but I like girls who are doing their best, so I respect every scene, whether it's a competition scene or a video.That's why I think there are various shapes.In that, I want to be a person who can give good vibes regardless of the scene.

-In this interview, I really felt that my current activities are all connected through snowboarding.
That's really true.As I have said many times, I want to move people's hearts with things such as my riding and art!I always cherish that.I met the streets through snowboarding, and I've been doing it for 10 years, no matter how hard it is, and now many people in Japan and abroad can see my riding and feel something. ..Through snowboarding activities, I met a lot of people and friends, and the art activities that I had been doing since I was little started. became.Even the bare mountain park footage that I've been longing for since I started to be interested in the park can now be shot and transmitted by myself.It seems that the whole flow was well connected because I was snowboarding.So I'm glad I've been fond of it and crazy about it all the time, and if anyone is wondering what to do now, it's all about keeping the path that my heart chooses. It would be great if it could be an opportunity to make a decision.

-Finally, what kind of activities do you want to do in the future?
Now I'm hoping that I can work while leaving it to this flow.I want to grow in order to expand my art activities without changing the base of expression, and I also want to think about various transmission methods for snowboarding.Use various expressions to heal those who need healing and high motivation for those who want to be motivated!I want to continue to express myself, believing that it will reach those who need it.

"Dirty Pimp" Rider 34 as seen from Filmer's DP
I've been working with 34 for about 10 years, but I don't think there are any girls riders in Japan who hate and are enthusiastic about it.While doing it on the front line of the street, he is fascinated by contests and expresses various tricks in the park.Rather than just doing what she likes, she is one of the ideal riders, regardless of gender, who has focused on slipping and honing her skills while thinking about various things.Recently, I've been recognized as a stylish rider at home and abroad, and I'm glad I've come this far after seeing a lot of support.

34 Miyon
Born August 1986, 8.Born in Fukuoka City, Fukuoka Prefecture.He is the main rider of the movie crew "Dirty Pimp" and is in charge of everything from editing to art direction.With the success of movie appearances and contests, it has gradually gained recognition both in Japan and overseas, and is extremely popular in the street scene.He is also an artist from Zoukei University, and has a wide range of activities such as illustrations for magazines and collaborations with snowboard brands.
Sponsors: CAPiTA, DIMITO, UNION, DEELUXE, COAL, OAKLEY, RIKKA FEEMME

"Go May Way." Delivered as STAY HOME special content will end for the time being in this article.However, the period of patience continues.We will continue to upload content that everyone can enjoy, so let's overcome the difficulties while enjoying being at home together! 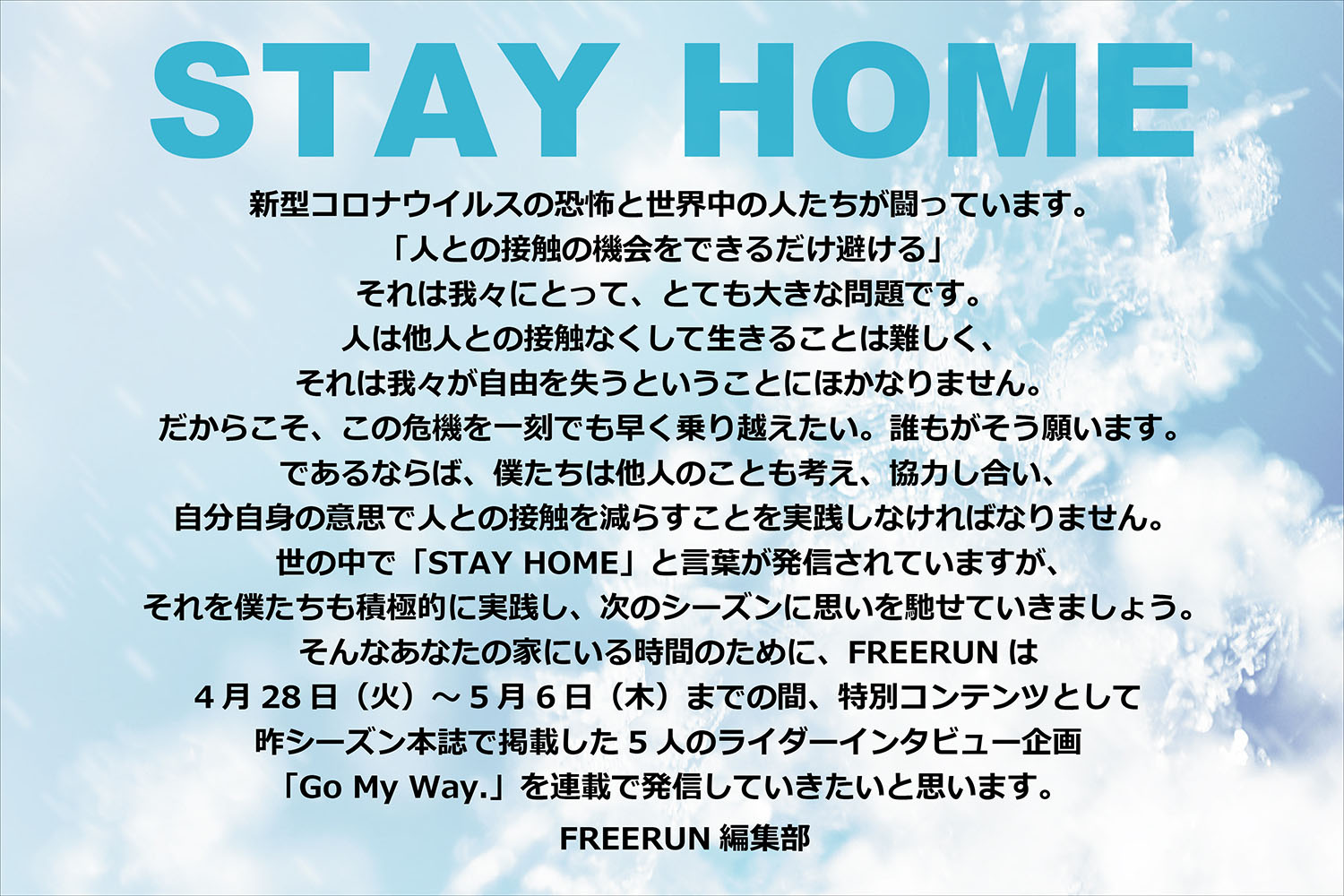