Yuta Kobayashi was born and raised in Koiya, a restaurant run by her parents at the foot of Hakuba Happoone.Surrounded by the magnificent mountains on all sides, which can be called a backyard, I grew up in the best environment that any snowboarder longs for.Such a genuine local is crushed by Hakuba culture and gains a lot of experience, overcoming a serious injury last season and making a comeback.In this interview, I would like to tell you what kind of underground local hero Yuta Kobayashi was born in Hakuba.
Edit: GAISU

InterviewFirst partThen, I heard about the way Yuta, who was born and raised in Hakuba, reached the current snowboarding style, and the story of the formation of the HACHI crew and his friends, which are indispensable for him.In the second part, we will approach the turning point of our own injury, resurrection, and current lifestyle. 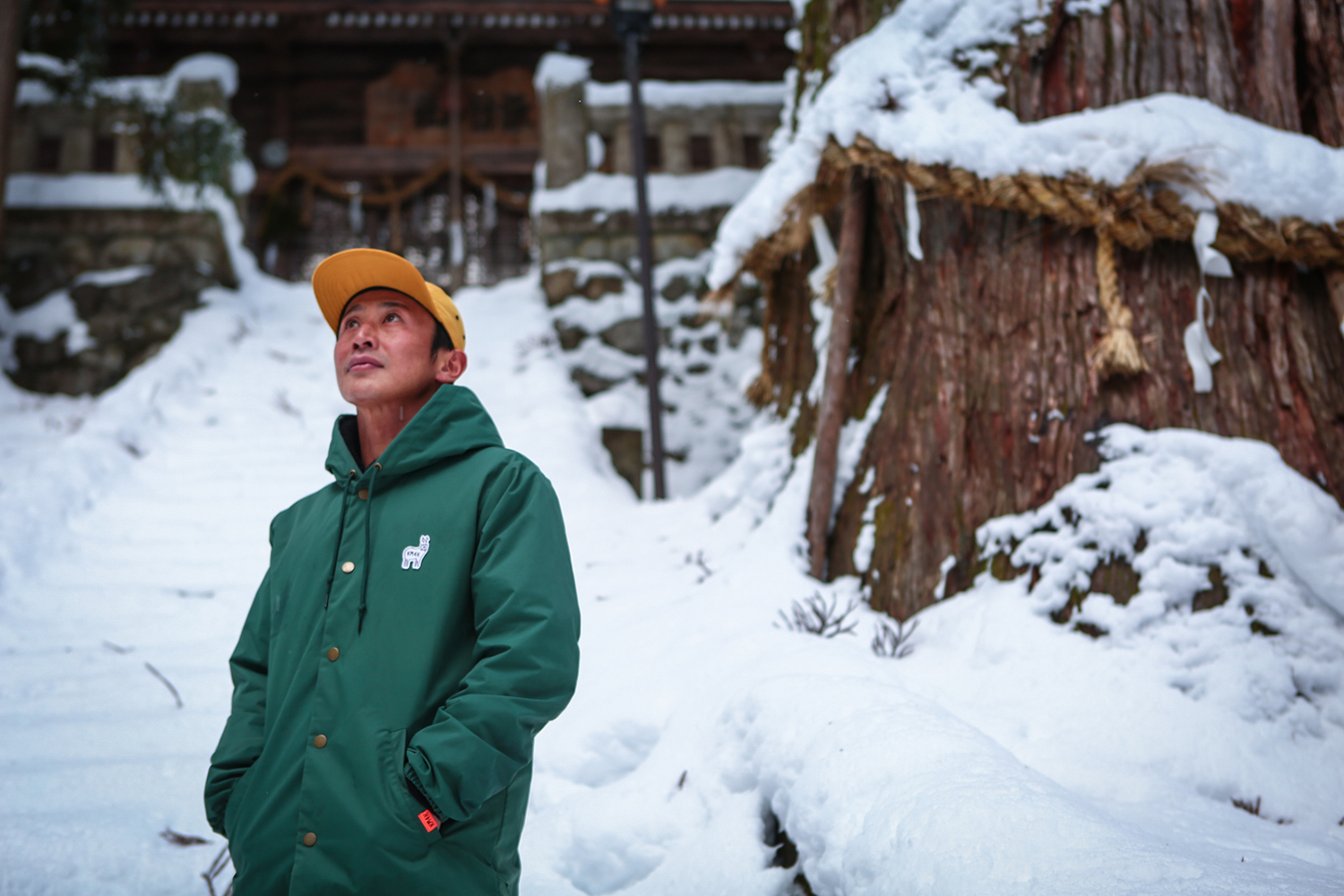 Snowboarding Your own serious injury that changed your life

-A new member has joined HACHI.As soon as I improved my skills while telling young people various things, Yuta was injured in the snowboarding life. 3 seasons ago ...
I think it was around the end of February.thatACCIDENTOne of the reasons is that I was playing the day before.It was like attending a shooting crew who came to Japan from the United States, and I was shooting the next day, but I drank at night.That was really bad.

-Where did you get injured?It was a knee, right?
In Hakuba's backcountry, the injured was his left knee.The ligaments of the anterior, medial, and posterior cruciate were all cut at the same time.It was dangerous, I'm glad I wasn't on my hind legs yet ...Aaron, a shooting crew from the United States, and Manu from Argentina were trying to move to the shooting point with him, and I was also impatient.I have a crew and I have to take them to the spot early while the snow is good.I didn't notice the avalanche I had when I skated on a tight tree swamp on a super steep slope at the beginning, and I was scooped up by a bone from behind.There was a tree just where it was washed away by the avalanche.After hitting a tree, a heavy avalanche came from above, and my knees were fluttering ...

-Did you feel that the snow conditions were suspicious that day?
there was.I definitely felt that the snow would be heavier in the afternoon.However, I thought it was okay because I was shooting cliffs and jumps instead of lines.Then a heavy avalanche came from behind.It's like a river at once.It came from behind and was swept away.If I was alone at that time, I was probably dead.I managed to get it because I had friends.

-You've gone in the wrong direction with a lot of impatience.
When I slipped one, it was a pretty good time, such as 1 o'clock, and I was getting tired, but I decided to go for another one.So I had to bring the crew early, so I guess I wasn't a little impatient and calm, at that time.I made a complete mistake.

-How did you get off the mountain after you got injured?
It ’s already slipping downI couldn't do it, so I asked him to bring all his luggage and walk ahead and hike back on his own.I managed to get back to the slopes, get a piggyback ride from there, and go to the gondola.It feels like it's completely done.As I said earlier, another factor was that I drank too much the day before and had a little hangover ...Never go to the backcountry when you have a hangover.I want to say to young children, "Stop it."It's late to notice, but I (bitter smile).

-You mean giving up there that season, right?
There is a Matsushiro Hospital in Nagano, but the doctor there is specialized in sports and seems to be a knee doctor, so I felt like I had to have surgery as soon as I went to the hospital.After all, I have two surgeries.Three ligaments are broken, so connect two and one more in the next year.There are still bolts in it, so it's another surgery.

-I had an accident with my friends in the snowy mountains, and I also had an accident.What did you think about the injury in the future?
It's all my mistake, though.Whenever you go into the mountains, you have to be in good condition and stay calm.This is the lesson I learned from my injury.Of course you can't slipI can't walkIt was really the worst because I couldn't work.Because of that, I haven't been drinking much at night lately.I used to go to parties and crazy, but I'm old enough to stop. I'm 37 years old, but it seems like I'm late to notice (bitter smile).

-When you got injured, did you cross your head saying "I can't snowboard anymore"?
No, it wasn't.I searched for various hospitals with the intention of continuing to be cured, and I thought I would have surgery.The more you slip, the less bad you are, and the better you are, the more fun it is, snowboarding.Well, I think that's the case with everything.So ... I can't stop it anymore, really.

-What is your current feeling as a snowboarder? Do you feel that you are still getting better at the age of 37?
I don't do a lot of jumps like one shot, but I think that if you put a jump in the line of slipping, you will still be good at it.Also, I think that spraying and applying systems will definitely improve.

-What are you particular about, "I'm the best here" and "I don't want to lose this kind of slipping"?
It's been four or five years ago, but for me now, the concept of my snowboarding is to jump in the natural terrain of Hakuba's alpine area.From now on, I'd like to wear crampons and hike for 4 or 5 hours, or even stay overnight in the mountains and attack the super alpine area along the ridgeline of Hakuba.I think hike is part of snowboarding, so I want to pursue the terrain and slopes that Hakuba hasn't slipped on yet.There are a lot of places I haven't done yet, so I've been in that system lately.

-Is that landslide concept a jump in the flow I mentioned earlier?
Yes, freestyle.Well, it depends on the situation and luggage at that time.If you're tired, you may come down with just a hit system.

-Snowboarding that you want to do is changing like that.
A place on Mt. Dekai that you wouldn't normally go to.My favorite place is becoming such a place, I am.Everyone goes to the backcountry area of ​​Happo, so more ... I think the line is endless, so I want to go to a place where no one is going now.The scenery you see at the place you go for the first time is really impressive, isn't it?However, the technique of climbing such a place is required, so experience is also important there.Also, knowledge of avalanches and mountains.I think I have to study more from now on.

-Is that feeling even faster after the injury?
It's a mountain I've always seen for a long time, so I thought I'd go someday.It's been around last season after the injury.There are various connections and timings, and what is exciting in me.

-Then, it may be a good turning point now.
That may be the case.After all, you want to get excited by seeing the dangerous scenery and slipping on the dangerous slopes to get adrenaline.I think it would be great if I could go to such a place by snowboarding while working.But don't get hurt, don't cause an accident.But when I attack, I want to attack.In perfect physical condition ...I wonder what to say ... I'm impressed with places I've never been to, maybe it's all there.

-There was a HACHI avalanche meeting hosted by Yuta last December.Why did you decide to do it?
I've always been looking for a beacon at the beginning of the season, but I thought I'd call a friend who usually climbs the mountain together.This time, I asked the guide to come and do something that was solid.It's not about what you're looking for, but the one that's exactly what you're looking for.Isn't it the generation that we have to do that kind of thing?Consciousness has changed, isn't it?I think it means that I want to raise more juniors.

Now that Hakuba is looking at the locals.And establishing a new lifestyle

-The Hakuba area is changing year by year.What do you think of the increase in foreigners as a local Yuta?
It's a difficult place.It would be nice if it was well-balanced, but it feels like the number of people in Hakuba has increased dramatically.Perhaps this bubble can't be suppressed and I think we have to get along well.But in Hakuba, there are people who eat it, and I am one of them.I'm actually benefiting from foreigners.There aren't many people on the slopes this year, and there's too much powder left.It's super great as a snowboarder, but it's a difficult place because it's of course better to earn money in your life.To be clear, I think it's super annoying for people who don't do business in Hakuba ...That's why I want to get along well, but it's a little frustrating for foreigners to enter anywhere.Even though we're patient, it's hard to get into the backcountry area even if you don't have the equipment.Besides, I don't want to suddenly get an avalanche from above even though I'm underneath.I don't want you to come to the backcountry unless you know that.But I have no choice but to get along well.

-Recently, it seems that you are working harder at "Koiya" run by your parents' house, but how do you perceive the balance between work and snowboarding?
I've been snowboarding for about 7 years while helping my parents' store with my current stance, but the customers who come to me say that the eels in our store are delicious.I also practice eels, and I want to sit down and do it properly.Besides, I think there are more opportunities in the future if we do business here.I think foreigners will come back next year.So, in my image, I would like to continue snowboarding as a lifestyle while opening a store.It would be great if I could be compatible as a rider.Little by little, I think we can see the future in the future.

What we can do to connect beautiful nature to the future ...