The last time I took a picture at Gran Hirafu Ski Resort by myself,

This time, we had to have a session with two riders in a hurry.

And Shin Miyajima who is active in the world.

This was the first time I had slipped with these two people.

I'm looking forward to seeing what kind of skiing will be shown on this vast backcountry slope.

Gaku was just the other day in Niseko's backcountry sanctuary.

I met him at Iwaonupuri and met him.

We just skated on the eastern side of Iwao together.I knew it before,

It was my first time to meet in a snowy mountain.

If anything, I've only seen him drunk at a bar.

I didn't think it would look good in the sun.

And Shin-kun was attending Niseko by that student.

I'm lucky to have a session with these two at Grand Hirafu.

It was very interesting to see which slope and how to slide.

The snow was light and the sun was occasionally shining on this day as well.It's a great day to shoot.

The free run after getting off the lift stimulated their skill.

Regardless of gender, age, or birthplace

As soon as you slide together on the snow, a sense of companionship grows.

This is also one of the attractions of snowboarding.

As the same shooting member

Communicate detailed information such as how the landing feels.

Shin-kun can easily jump over the slope with just one ollie.

Jumping over here wasn't in my image.

"Is it possible to fly this way on this slope?"

I was allowed to make a new discovery.

The points to choose depending on the rider are different,

By knowing the point selection

A new image will spring up within me.

Gaku-san is the same Goofy, so he had a session.

The point I was aiming for was similar.

It's embarrassing to slip on the notebook now. "

I don't understand, but

I've been snowboarding for 10 years, so maybe I've skated a lot of no-tracks.

If I skated for 10 years, the feeling would be different, but

I feel like I'm sticking to a notebook for the rest of my life and slipping.

Riders' sensibilities are also interesting because they are different for each person.

I continued to search for a place where powder was likely to remain with local students.

There were still places in the forest.

After finding the point, I continued shooting.

When the shooting was approaching in the second half,

When I jump, I spend some time doing image training

I thought it was something to breathe, check the landing, and fly, but ...

I landed lightly with a melancholic love with the style of the front 360.

To be honest, it was quite shocking to me.

Shin-kun has been free-running on the regular slopes

Maybe because I was flying and spinning around, I was making lightly with this mash.

After all, I usually do it, so I can do it immediately with a mash.

I was reminded of the obvious.

Get used to jumping and spinning.I also thought that I would consciously incorporate it in the future.

It's not a particularly snow-packed burn,

It feels even more so on the slopes where non-compacted snow powder snow is piled up.

The shape of the mash and the slope of the landing are not the same.

Influenced by the two, I was motivated to get better.

Snowboarding doesn't get tired even after many years, it's really deep.

It is being improved and evolved every year.

And the level of technology of SNOWBOARDER and others continues to evolve.

You may feel that it is deep because there is no goal.

This time, because I slipped with this member

It was an opportunity to think about the history and evolution of snowboarding.

It's not just that it's fun to slip

I think that you will be able to think a lot about nature such as snow, wind, terrain, and the spacing between trees.

"Yesterday the wind was northwest, so it looks like snow has accumulated on that slope."

"Today's visibility is poor, so a tree run would be good."

After gaining this kind of experience on a slope close to the backcountry,

I think it would be very useful if I actually skated in the backcountry. 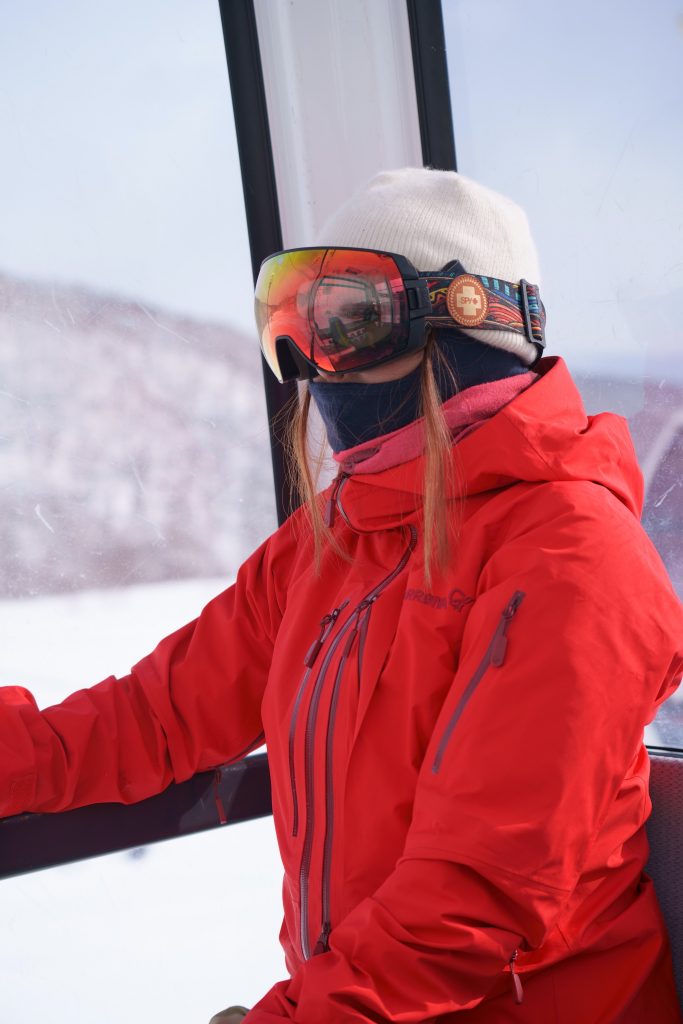 If you gain experience, even when you actually go to the backcountry

You will be able to glide smoothly.

But no matter how smooth you can slide

When you actually go to the backcountry

We recommend that you have a backcountry guide guide you.

No one can beat a natural opponent.

That is why I think it is important to always learn with respect and humility.

I think it's a shortcut to get closer to such a backcountry.

I also wanted to go skiing at the Grand Hirafu ski area next season.

After all, the Grand Hirafu ski resort has been around for many years.

Buoyancy and ease of handling beyond imagination_YONEX's technology is born...