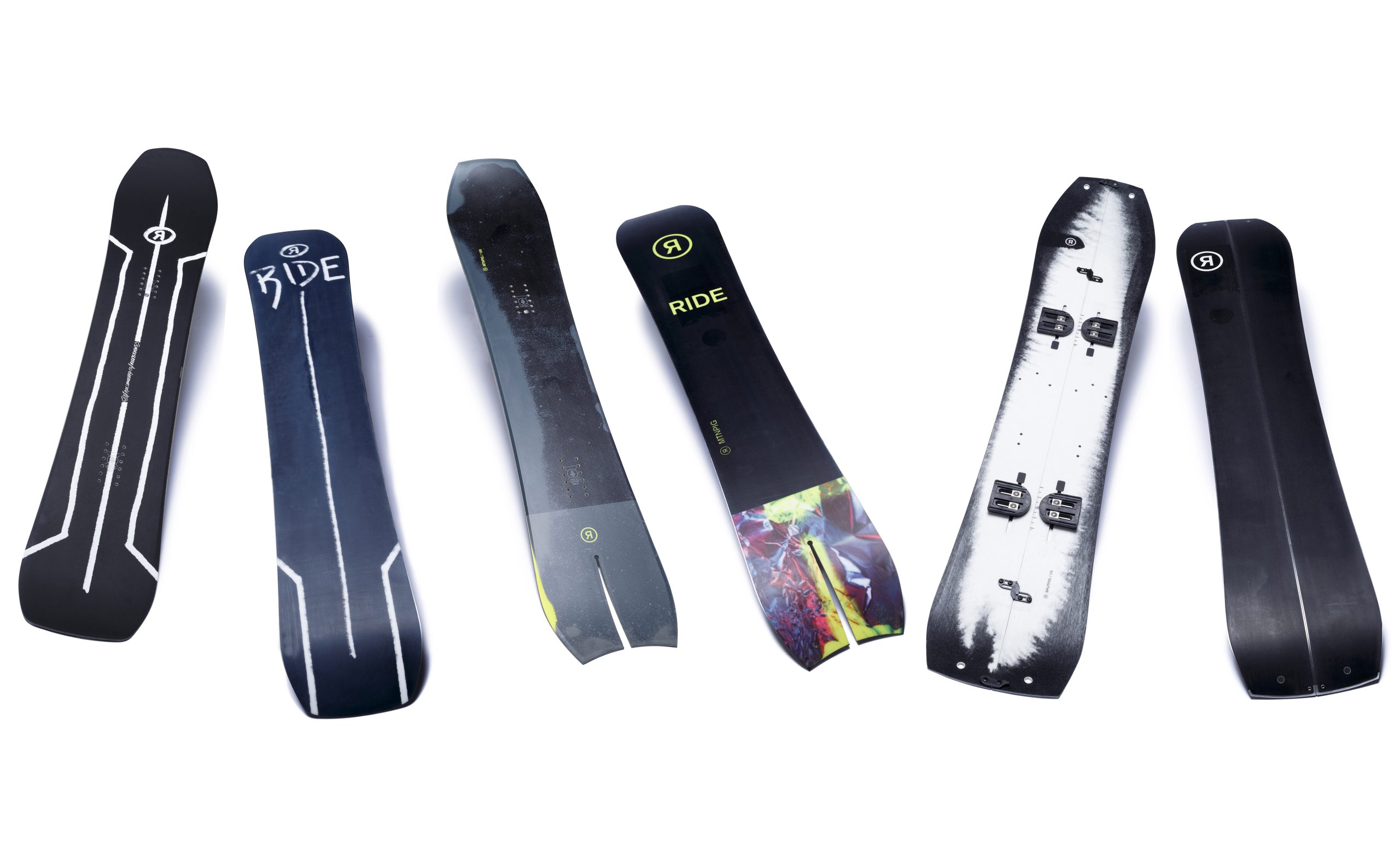 RIDE SNOWBOARDS, which originated in Seattle, USA, which will celebrate its 30th anniversary next year, will drop a number of powerful models in the 21/22 season.Among them, all freeride boards with new ride quality based on the know-how cultivated through many years of product development are gaining a lot of support from professional riders.In this article, we'll highlight three models that we're particularly interested in this season.

RIDE's freeride board that has undergone dramatic evolution

There are quite a few freeride models dropped from RIDE snowboards this season.First of all, I would like to introduce the new model "SMOKE SCREEN", which has been newly added this term.It is a directional hybrid rocker with a taper, and the nose side is a rocker and the tail is a camber.The feature of this board is that it is an all-mountain board that you can enjoy from grooming to park and powder.It is a medium flex and is located on the soft side of the RIDE lineup.The tapered side curves are sharpened by grooming and support small short turns in tree runs.And the hybrid rocker of rocker and camber enables sharpening of the edge in addition to operability.Since the front of the nose and the back of the tail have carbon, the ollie in the park and terrain also shows outstanding response.It is a well-balanced model that achieves high gliding performance in all fields and conditions.For those who are not good at boards that are too hard, SMOKE SCREEN is just right. 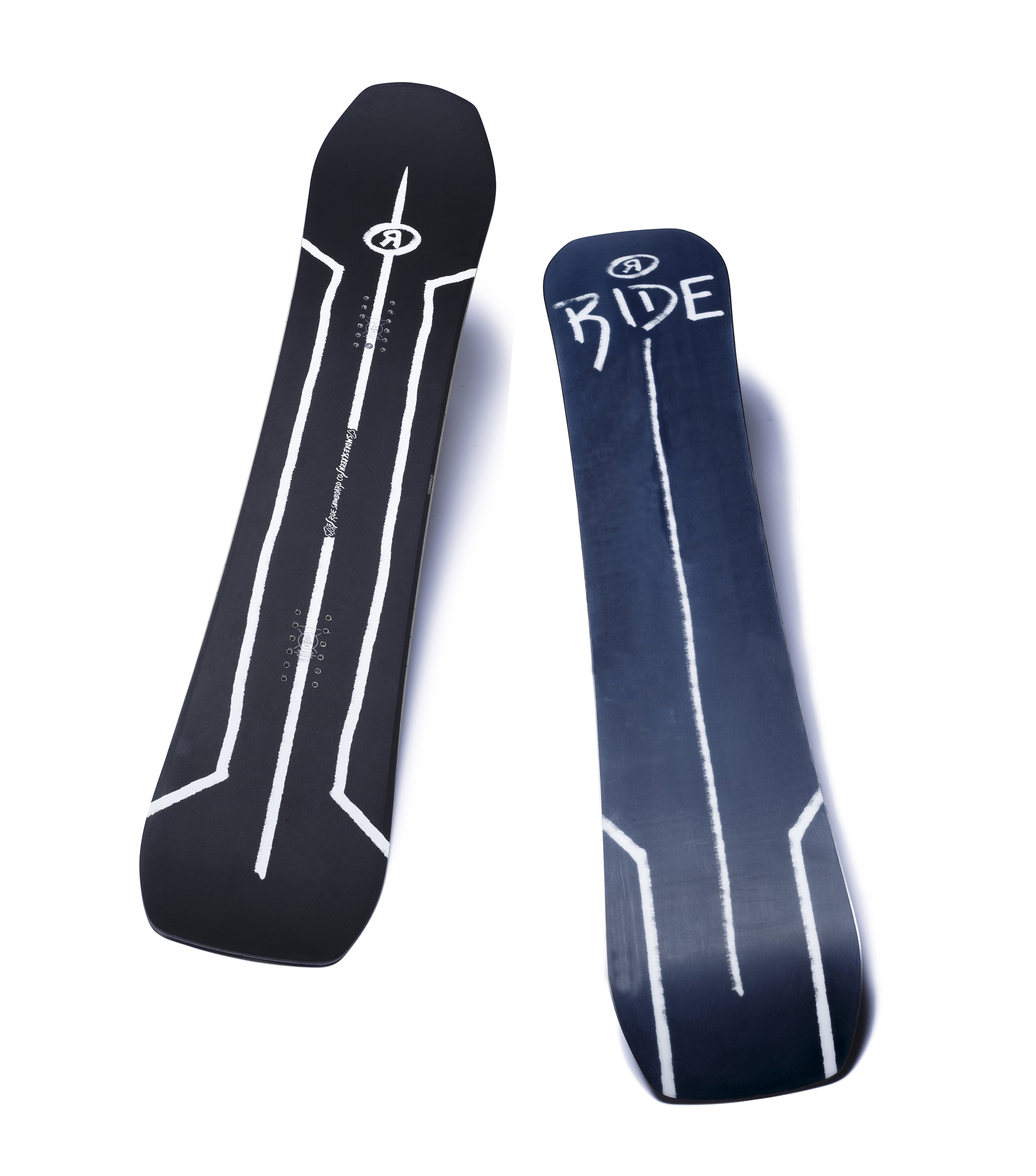 SMOKESCREEN
The new SMOKE SCREEN from this season is for all-mountain riders aiming to improve their level.The combination of a directional hybrid rocker and a tapered elliptical progressive side curve supports high-speed turns.
★ SIZE: 153, 155, 158, 162, 165, 157W
★ PRICE: ￥ 73,700

MTN PIG which was very popular at the test drive event

And it is the PIG series represented by WARPIG that has been rumored to have an interesting ride even among professional riders for the past few years.WARPIG, which is characterized by its wide, angular nose and tail shape, demonstrates high gliding performance in various fields such as powder and grooming.Introducing "MTN PIG" with a modified tail shape from the PIG series.The conventional feature is that it is a hard flex board that goes straight and can be relied on even on steep slopes, but the new MTN PIG uses a split tail with a notch in the tail.This split tail decisively changed the quality of the slide.The design is designed so that the split spacing increases toward the tail, which greatly improves operability.Also updated to a sidewall that looks like a half-cap structure called a slim wall.It is said that the edge feeling is improved and the ride feels lighter. MTN PIG has always been the hardest model in the PIG series.Therefore, it was regarded as a board suitable for professional riders to ride at high speed on open steep slopes.However, without changing the hardness, the split in the tail has evolved so that carving can be cut deeply even on gentle slopes.Originally, it became easier to operate the board not only on the steep slopes that this board is good at, but also on powder and terrain, and it was quite popular not only for team riders but also for test rides.Many of the impressions of the test riders were that the board does not shake easily even on uneven terrain due to the slope, so there is a sense of security, and the edge grip is firm and the turn is sharp.The strong response is for aggressive advanced players, so it is very popular with team riders, and many riders say that it is easier to play than the past MTNPIG.It feels easier to bend than before, so if you ride on a steep slope to some extent, you can feel the characteristics of this board more.This is a recommended one for those who want to buy a freeride board this season. 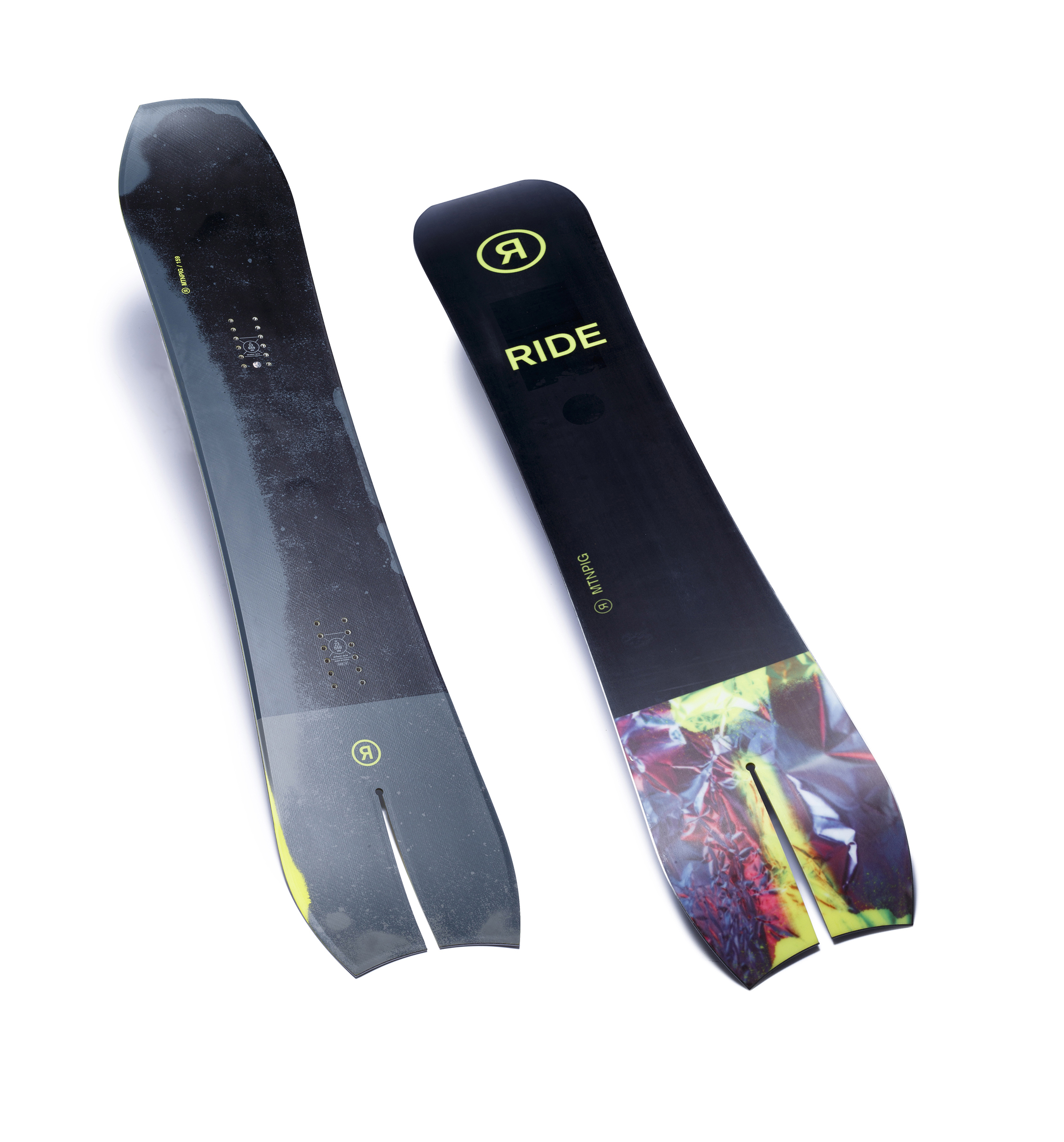 MTNPIG
A free riding board featuring a split in the tail. The quick handling peculiar to the PIG series is attractive, and the newly redesigned split tail creates a dynamic turn.A model for advanced users who want to run through the entire mountain at high speed and wind up the spray even with powder.
★ SIZE: 155, 159, 162, 160W, 164W
★ PRICE: ￥ 90,200

Furthermore, "SPLIT PIG", which was developed as an early model last season, will finally start in earnest.There have been many voices expecting the release of the split board from RIDE, but as RIDE comes out with a split board in the shape of WARPIG instead of the typical freeride board, I feel the spirit of horizontal glue. SPLIT PIG has the same shape as WARPIG, but the core material is a combination of WARPIG and SUPER PIG. SUPERPIG has a slightly stiffer setting, which adds high-speed stability to the playability of WARPIG.Also, because of the walk mode, a little camber is put under the feet, so it is easy to walk.However, since there are only two size ranges, small (148) and large (154), I hope that the lineup will increase in the future. 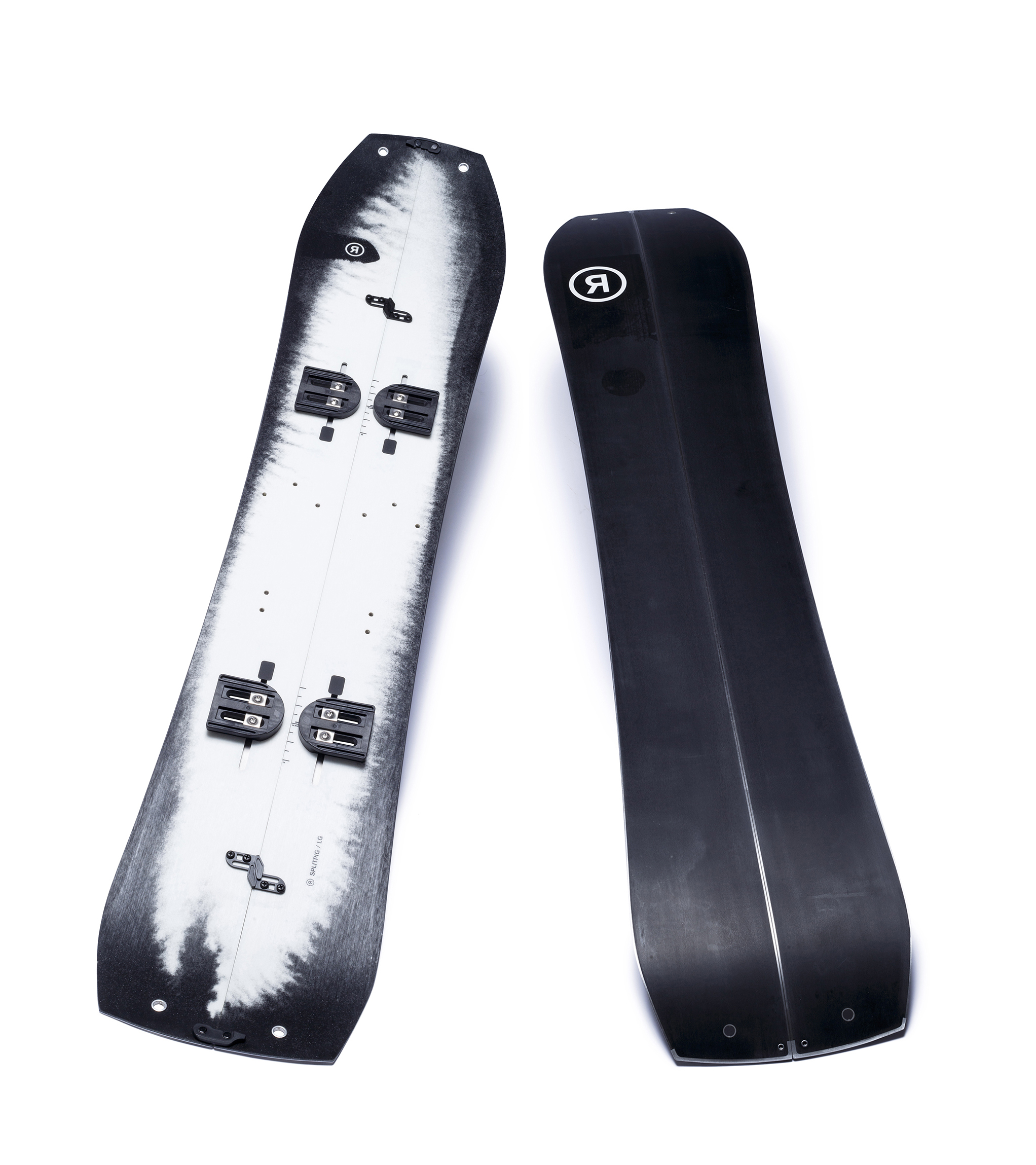 SPLIT PIG
The unique WARPIG shape on the split board. It is the same directional hybrid camber as WARPIG, and has a slightly stronger camber than WARPIG due to the walk mode.Team rider Kenji Ando is also one of my favorites.
★ SIZE: SMALL, LARGE
★ PRICE: ￥ 176,000

Among the models released from RIDE this season, I would like you to take a ride on the freeride board designed on the premise of "playing through the mountains".From the park to the mountains, and to those who want to play more terrain and powder than ever before, you'll definitely find a board that suits your slip. 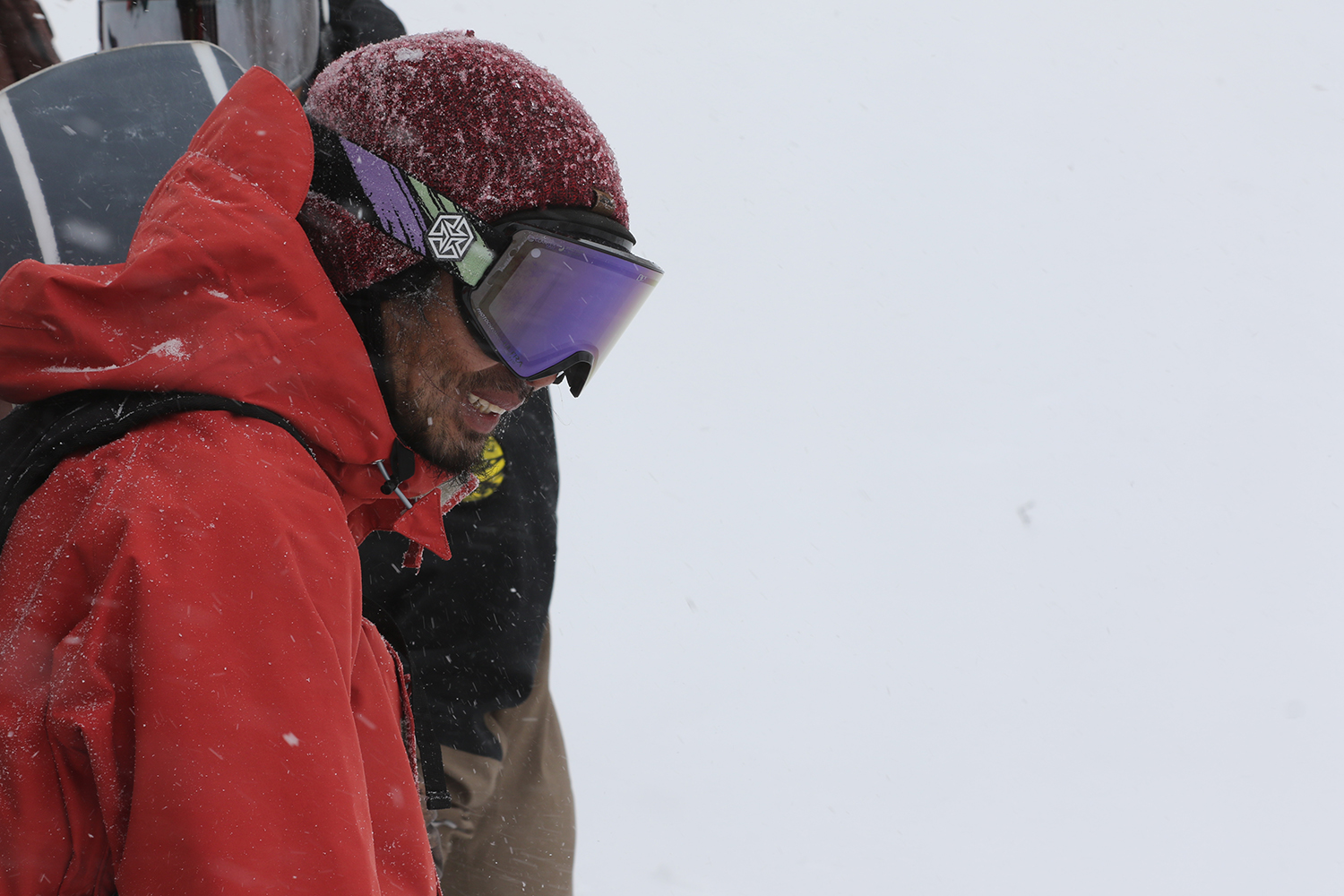 "It's a little wide, so it has buoyancy and stability, the flex is medium, so it's easy to handle, and the tapered shape is good, so it's easy to bend.The ollie also has a lot of repulsion and can fly.It feels like an all-round board that you can ride easily.The powder is interesting, and you can enjoy the park and corn snow in early spring.Especially in areas where the terrain is rugged like Myoko, I think it's really perfect for flying, hitting, and playing like that.Moreover, I can't ride until I get used to the board ... but it's easy to ride from the beginning.From backcountry with big slopes to fine terrain play on the slopes, to some extent it should be really enjoyable for people who can glide in the mountains. "by Keizo Nakanishi Board used: SMOKESCREEN 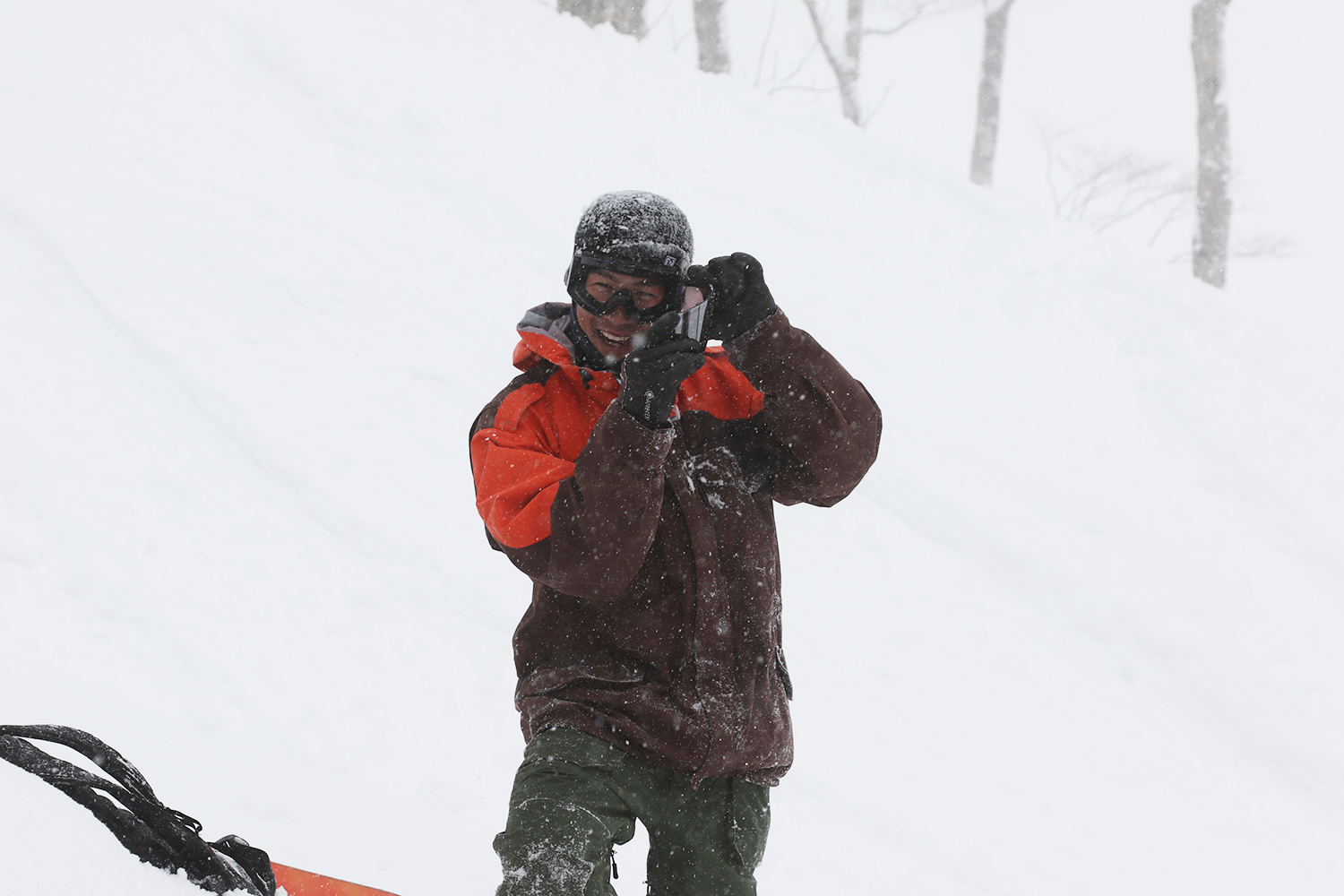 "The first impression is,'Is this tail okay?'. Moreover, it's a board that doesn't really bend before the tail breaks ... Even if the tail is cracked, it's actually a normal tail if you're on the center line. You can also play the ollie as well. And when you tilt the board in the second half of the turn, only the tail bends and snaps, so you can quickly switch the tail. The best thing I thought was the mountain. The point that it is easy to match smoothly with 3D terrain. Even if you slipped casually until now, you can feel that "this shape was like this", and that is insanely comfortable. However, high speed stability is good. You can also land on the switch or butter, but you may not be worried about slipping on the switch? After all, there is a catch and the powder comes out from the split part (laugh). Still, it is more interesting so I love it increase"by Masateru Kitae Board used: MTNPIG 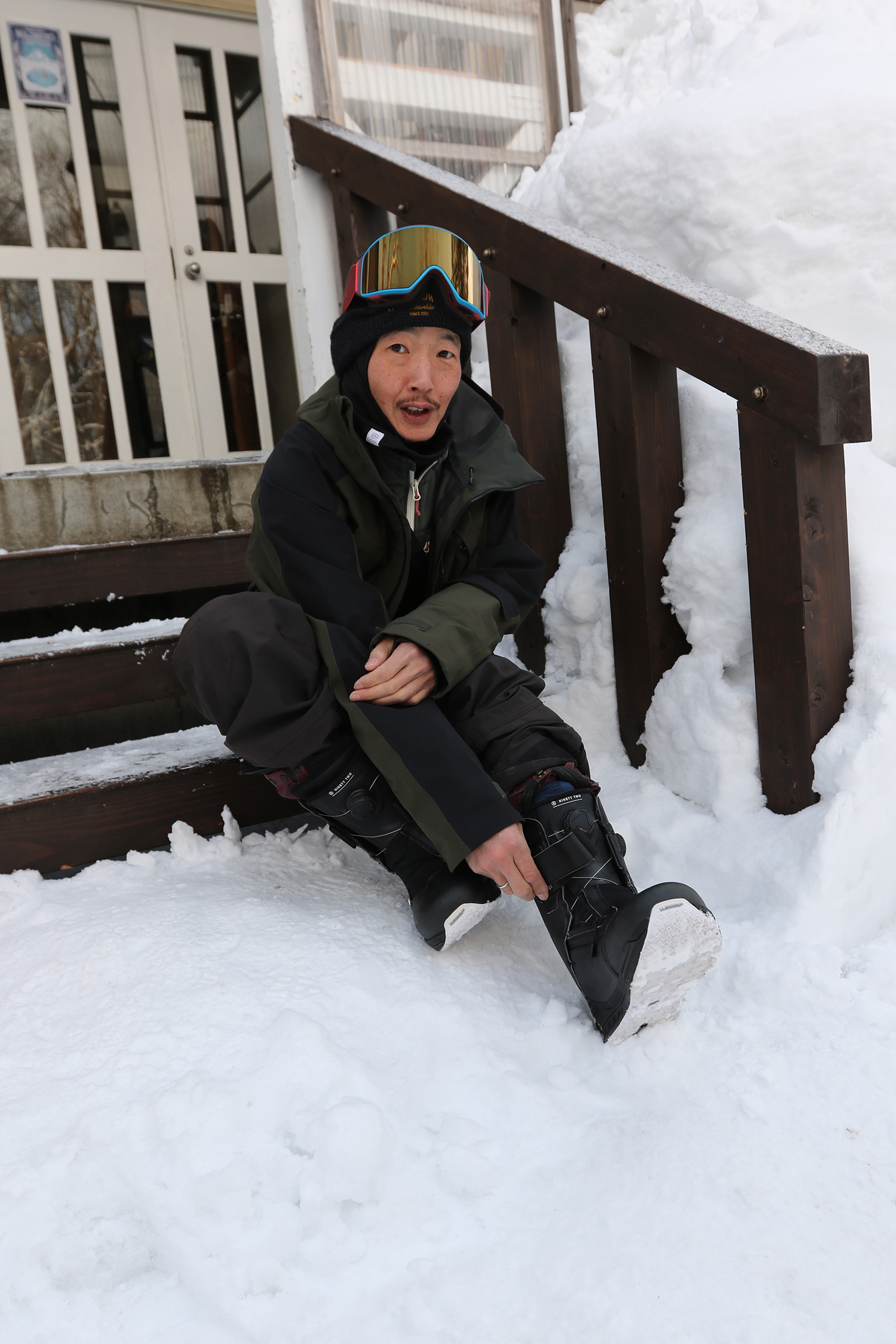 "As an image, it feels like the SUPER PIG is broken.It also has a camber and is more rigid than WARPIG.In the first place, I avoided thinking that split board couldn't be a good ride.However, when I tested it, it was about 30 times easier to walk than snowshoes, and the length was short, so the kick turn was stress-free.Moreover, the amount of sliding powder was not so different from that of a solid board.I didn't feel any weakness when I did 360 spins with the mash, and I didn't feel the ups and downs of the middle edge.However, it is heavier because it has more parts than a normal board (bitter smile).Even after subtracting it, I want to use it because of the lightness of my back when walking and slipping.Because it's super easy.If you like to turn in the backcountry, I really recommend this one. "byKenji Ando Board used: SPLIT PIG

RIDE moves his home design team to the foot of Mt. Hakuba ...

Ryoki Ogawa, who joined the RIDE US AM Team ...

RIDE Chi, which proves its power in parks and streets ...