It's been a long time since I posted 😊 I haven't posted a blog for a long time, but I've been doing well since spring!
Today, I will write about POW JAPAN, who is an ambassador ☆

October 10th, Bandai Town, Fukushima Prefecture, Alts Bandai, and October 18thBURTONIt was held in Nagano for XNUMX consecutive weeks!Pow JapanGoro Komatsu, who serves as the representative director, serves as the main speaker, and I participate as an assistant and guest speaker.

I think many people know,POW JAPANI will introduce a little!2007Professional snowboarders who felt the danger that climate change would have a great impact on the snowy mountains, which is an important field for us skiers.JEREMY JONESFounded with friends Protect Our Winters(POW).2018Year,13As the second countryPow JapanActivities have started. (For more information,POWSearch for! ) 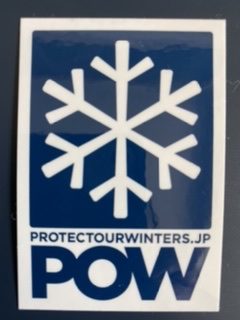 As an aside, I met Goro Komatsu, the representative director of Pow Japan, in Whistler, Canada.A friend from just before starting snowboarding.Rather, due to the influence of Goro-kun, I switched from skiing to snowboarding!My first board is a sample board of the board that Goro-kun was producing at that time. (Goro-kun's mischief included ^^) Pow Japan where the people I respect are active.I'm really excited to be a POW Ambassador from this spring!

The environmental education program "Hot Planet Cool Athlete", which started in Japan from this year, conveys the mechanism of change and climate change that POW ambassadors (professional snowboarders, professional skiers) actually feel in the field, and aims to solve problems. An environmental education program that conveys what each of us can do and hints for making changes in society.In addition to cool riding images of skiers and snowboarders, we will tell you various data, the current state of natural disasters caused by climate change, and concrete actions that can be taken in about an hour.The data is amazing, there are many graphs and photos, and you can easily get in just by looking at the slides.

What surprised me most was that Japan is the heaviest snow country in the world, and the average temperature in the world that has risen in 1880 years since 140 is 4.8 ° C, and humans are greenhouse gases at the current pace. It is said that the temperature will rise by a maximum of XNUMX ° C at the end of this century. An unexpected thing that happens just by rising XNUMX ° C. What will happen to the earth if it rises by XNUMX ° C?It's not a distant story, but a world where your own children and their children live.A world not so far away.

After all, if each person does not take action ...Enjoying nature and having a feeling of love is also an important action.For example, when you go on a diet, you'll try this and that for the time being.I want to create a future earth full of the blessings of nature with the ingenuity of each and every one of us, imagining what will happen in the future, so that we can imagine ourselves becoming beautiful and have fun changing!I am still studying.And the practice is still in the future. As a POW JAPAN ambassador, I would like to practice this and that as a mom who loves nature, so thank you ^ ^ ☆