An interview article was published in the December issue of Freerun!

It's difficult to talk about myself, but if it's an article about myself, I wanted to convey a message to the readers, so I paid attention to the text.

What I wanted to convey was ...

I don't know what to do in life, what fills me, what is interesting!If you have any thoughts, in fact, everyone knows, it's just to put it into action, so I've been talking about it for a long time, so if you read it and feel something ,I think.

There is nothing special for those who have a purpose and are heading straight for it.

Keep up what you are doing !!

The reality is heavy!If you just do what you like, you will run out of money and nothing will happen!

That's natural! To "achieve the purpose", I also work part-time and wash Sarah.Cleaning the room, washing clothes, cooking, all the simple things!Everything is "to achieve the purpose" and everything is connected.There is a saying that Rome can't be built in a day, and the road to Senri is just one step away.Psychokinesis rock is also passed through.If the dog walks, it will hit the stick.With that kind of feeling (my favorite book when I was a kid was a picture book), even if you laugh positively and make mistakes or things don't go as you want, it's the life of Buddha that you don't rush and push forward without blurring. I think it's the secret to enjoying going.I would be happy if such a thing was conveyed.

There are some aspects that look like dark news, pessimistic things, black jokes, and "bad bullying" because I wanted to stop by.

I want to live in a good world if I live anyway.It will be a world where each person thinks so.

In fact, every day is full of beautiful and moving things.

It becomes real only when there is a shadow.

I want to live realistically.

I don't often blog about painful things and failure stories.I don't think it makes sense to spread it to people.

Even if I mention Miyajima in the world, I haven't come to mind at all.It's hard every day.

If you are satisfied, it ends there.

Know enough.It's important to be grateful.But more importantly, spreading good vibes to people who are related to you is the only thing that people can do.Of course, it may be necessary to go to Africa to volunteer for the poor and fight against the great evils of the world.But I think I should decide what to do.I want to do what I want to do.Still, I think it can have a positive effect on the world.

I'm thinking of a guy who's just crazy about snowboarding.That's why

I'm running out of cancellations, so I'll tighten it.

I had a jib session in the first snow session two days ago, and I hit my head one by one with the demon slam xXNUMX, and I was a little disappointed that my head was still dull or I was stupid again. It was today. 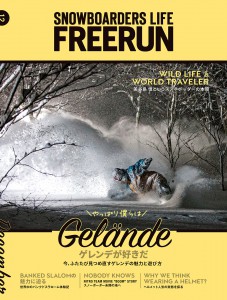 This photo was taken around XNUMX o'clock in the middle of the night.

It is a work created by the energy, passion and good luck of so many people, it is a deep and deep piece for me, and the picture of "just turning" is on the cover of FREERUN magazine in the world. Being hired makes me feel the fun of life.

By the way, in this interview, it was composed only of front side grabs, commonly known as indie grabs, and I thought it would be interesting to be aware of various grabs.

I thought it was a whim and a miracle of my life to suppress the front cover, back cover, and interview with one book.

At the cosmic level, it's nothing.

I want to continue to live long, cry and laugh with passion, and live as much as possible without causing any inconvenience. 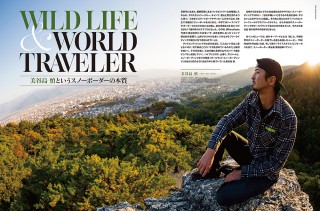