As some of you may know, I would like to introduce Takeshi Komiyama (commonly known as YOSHI).

I met a lot of people, but maybe not so many people were as shocking as he was. .. ..Lol!

He was born and lives in Los Angeles, USA.
The mountains are slipping on mammoths and bears, and of course they are native, so English is fluent, and it's just bad!

Anyway, if you say "YOU ARE NOT A HUMAN! DEMI HUMAN!" With a great personality, you will be a cub, so please pretend not to notice it.

But when I look at the slip, I think it doesn't look like a human, but lol!

He sent me a video of myself taking a selfie this time ☆
Please support him who appears in HEART FILM! 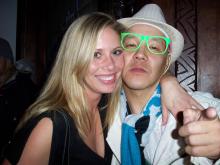