Mitsugu Toyoda is based in Myoko, a heavy snowfall area.
The name Mitsugu Toyoda comes to mind when he is a former All Japan Skateboard Champion winner in skateboarding, releasing a signature model from SANTA CRUZ, participating in the National Pro-Am Open, and being a former All Japan Halfpipe Overall Champion in snowboarding. Yes, he was a former head coach of the All Japan Winter Sports College and is nowThe Northface,TJ Brand snowboards, OAKLEYHe is also a multi-talent who is a guide to the Hikarigahara CAT tour and a private lesson called Starting point, which he launched himself. In fact, he is the father of a gentle child who loves ukulele and guitar.

Snowboarding isn't something that only young people can enjoy, and it's not that you can't do it after you're 40.But for those who live as professionals
Not a little, most professional snowboarders once think deeply about the idea of ​​"how long can we continue as it is?"
This time, we interviewed Mitsugu Toyoda, who does not feature the present of "only the moment when the light hits", but still continues his professional activities, focusing on advice for snowboarders, homes, and young snowboarders. .. 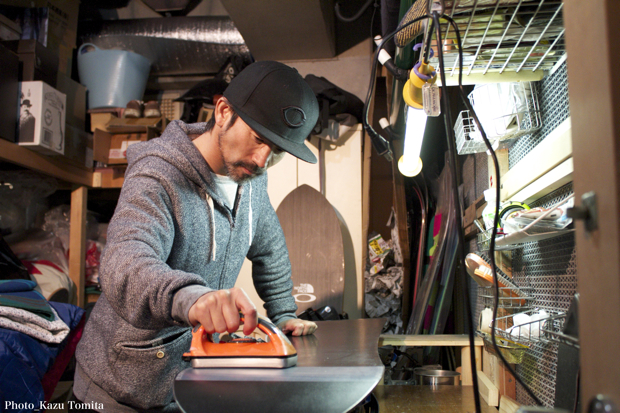 XNUMX) While many people think that going on (snowboarding) over the years is negative, if there is an event such as a chance to become positive, please tell us from that experience.

That's a good question! (Laughs) I think there are many techniques that I couldn't do because I knew the best about my ability when I was active.I think it's because of my age, my injury, or my physical condition.
It can be negative for everyone!Because you can't do what you were able to do.I think I can almost always do what I learned as a normal job.Because I understand it with my head.
However, being able to express with the body becomes frightening with age, and it becomes very difficult to draw a line between doing it, not doing it, and not doing it.
At that time, I don't want to say, "I was able to do it before."In that sense, it's difficult to gradually retire from active duty.I thought I knew it, but I realized that it wasn't that difficult.

That's why I also have some negative aspects, but as I get older, I've become able to control it.It's also great that I can say that I can't do what I can't do.
For example, I'm working with him now, and I have a fellow rider who is skiing aggressively, but on the contrary, I'm weak. On the contrary, I think it was a big reason that I could understand myself that I am now.
Everyone evaluates by looking at their own slips, and now I'm getting better at throwing away my pride in evaluation, and I'm able to continue again.
But I think it took more than XNUMX years.There were a lot of times when I was worried and clogged up and I was forced to drop myself, and there were times when I was disappointed.

XNUMX) Certainly, about XNUMX years ago, I hurt my back and sometimes I couldn't slip for a whole season.

There was such a thing!
At that time, I realized that there was nothing more frustrating than taking a place to express myself.That's why I think.Each person should have a place to express himself in every place, and that place is indispensable.

Whether you're a beginner or a professional at a fun level, I think people who are leaving the video right now have the same values.However, I also think that having fun has a "level".
For example, a person who has only XNUMX skills and a person who has XNUMX skills have different dimensions of fun.Sometimes you will practice and remember that dimension stoicly, and there will be a "change" in which your eyes change.Then, even if the fun is the same, the weight at that moment should change.

Of course, it's fun to be in the same place and under the same sky.However, when it comes to sliding on a certain slope, "fun" with a high technical level leads to "discovery" of new fun.So, as an advice, I think it would be nice to have a lot of practice, effort, experience, and knowledge.

XNUMX) I think it's important to remember while watching people slip, but for example, people who can only slip on a weekend day have few chances to do so.In addition, most Japanese people think "I don't like lessons anymore" just by slipping a little, but in the United States, there are current situations where beginners to advanced players take lessons and coaching in any sport.

I agree.I think snowboarding is a sport that makes you better at teaching.I and professional snowboarders spent time and money to create such an environment.
I created an environment where I could slip behind a good person, steal it with my eyes, let it soak through my pores, and naturally make it my own.The secret to getting good at snowboarding is to chew and express what you put in information with your eyes instead of words every day, but it is quite difficult for people who ski on weekends while working and who are looking forward to skiing. It's difficult to create such an environment.But in that part, I think lessons are very close.

It is another way for me to go to such a place and create an environment and take lessons once a week or once a month to acquire even a little knowledge and skills. I think
I feel it's the "environment" they need.

XNUMX) Until now, I thought it was important to learn, but I also felt that "learning" was important.The experience and knowledge that our ancestors have acquired with great thoughts can be heard only once, and the fact that they do not have to make a detour will ultimately be a plus for them. I think not.

There are times when I also see and remember this snowboard, so I thought that I could help myself in the part of being taught, and a lesson in Myoko that teaches how to slide in the backcountry and free riding, Starting point I'm doing that.
I'm doing backcountry riding and private lessons at Seki Onsen in order to provide everyone's "environment" to raise the level as a new stage as a restart from any level, but it seems that I am getting the point thanks to you. I've received a lot of inquiries.

Perhaps because people who think "it's embarrassing to take riding lessons now" can easily participate in private lessons, there are groups, but the number of one-on-one teachings is increasing.
In the lesson, I find the good part of the riding of the person, but I teach the part that is not enough in XNUMX hours of the lesson.I think the lesson content is sometimes tough, but I'm doing my best to raise that person's level.Therefore, if you feel the wall of snowboarding both technically and mentally, but want to have more fun and make new discoveries, please join us. 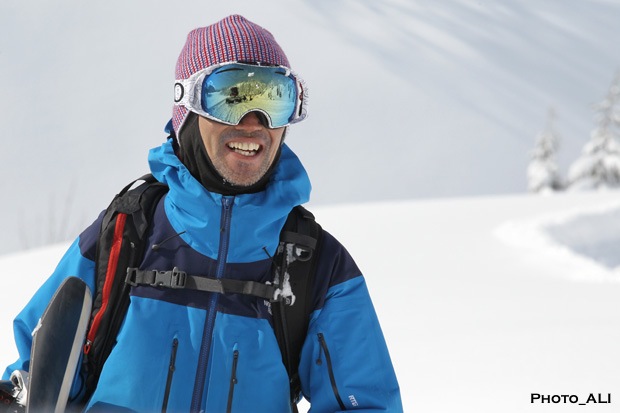 Enjoy the finest snow pressure in a carbine / White whirl ...

Check it out on business days!The swelling course, walls and terrain are good ...