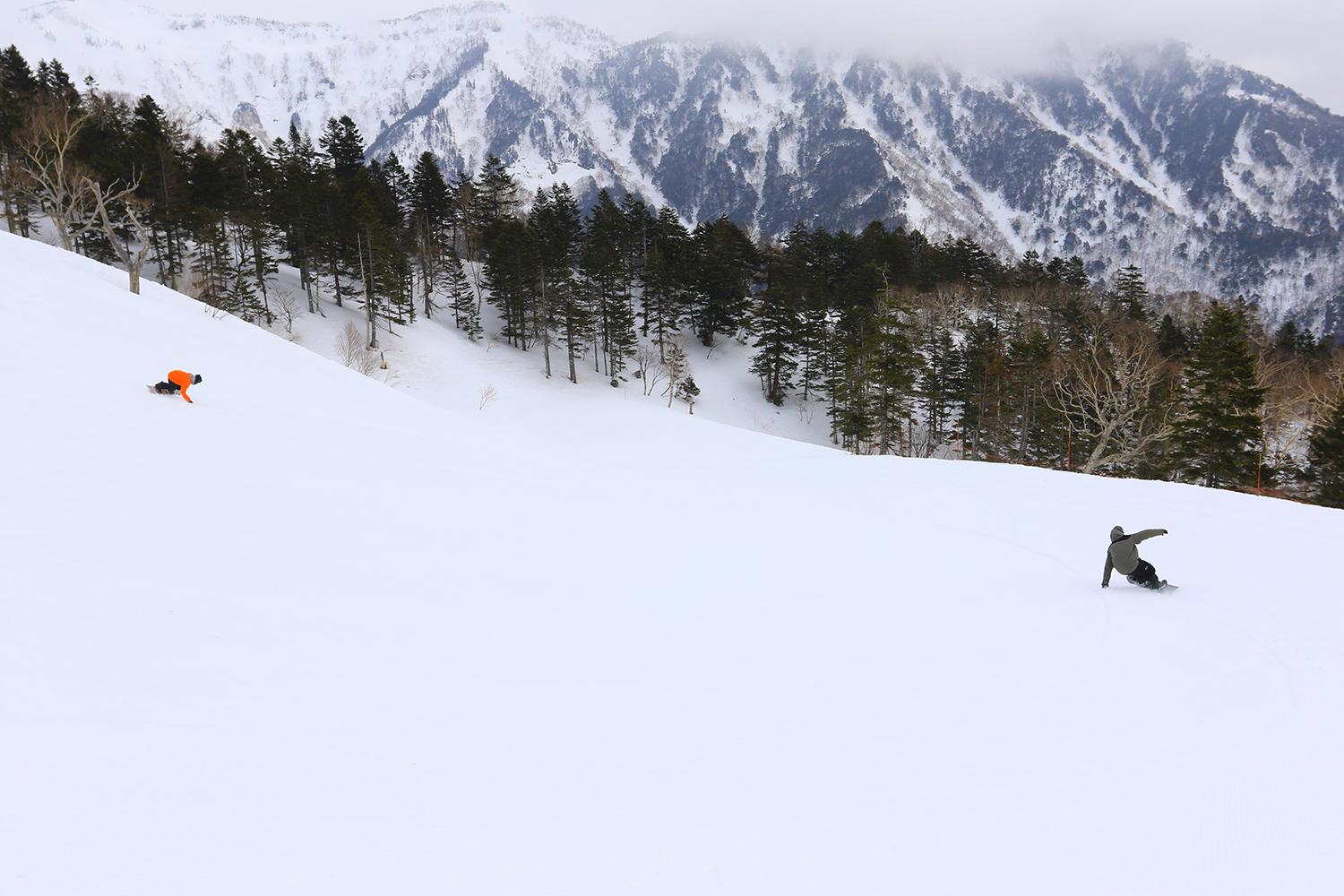 Masateru Kitae and Keita Yamazaki are the original members of the film crew "HACHI" based in Hakuba Happoone in the Northern Alps. One day in March, two people are talking about this springWe are developing a 3D artificial terrain course called "THE SURF RIDE PARK"I slipped down the Gunma / Kawaba ski resort.As expectedWhat is the Kawaba line where two locals from Hakuba slide?
Photo: KUWA
Text: Gaisu 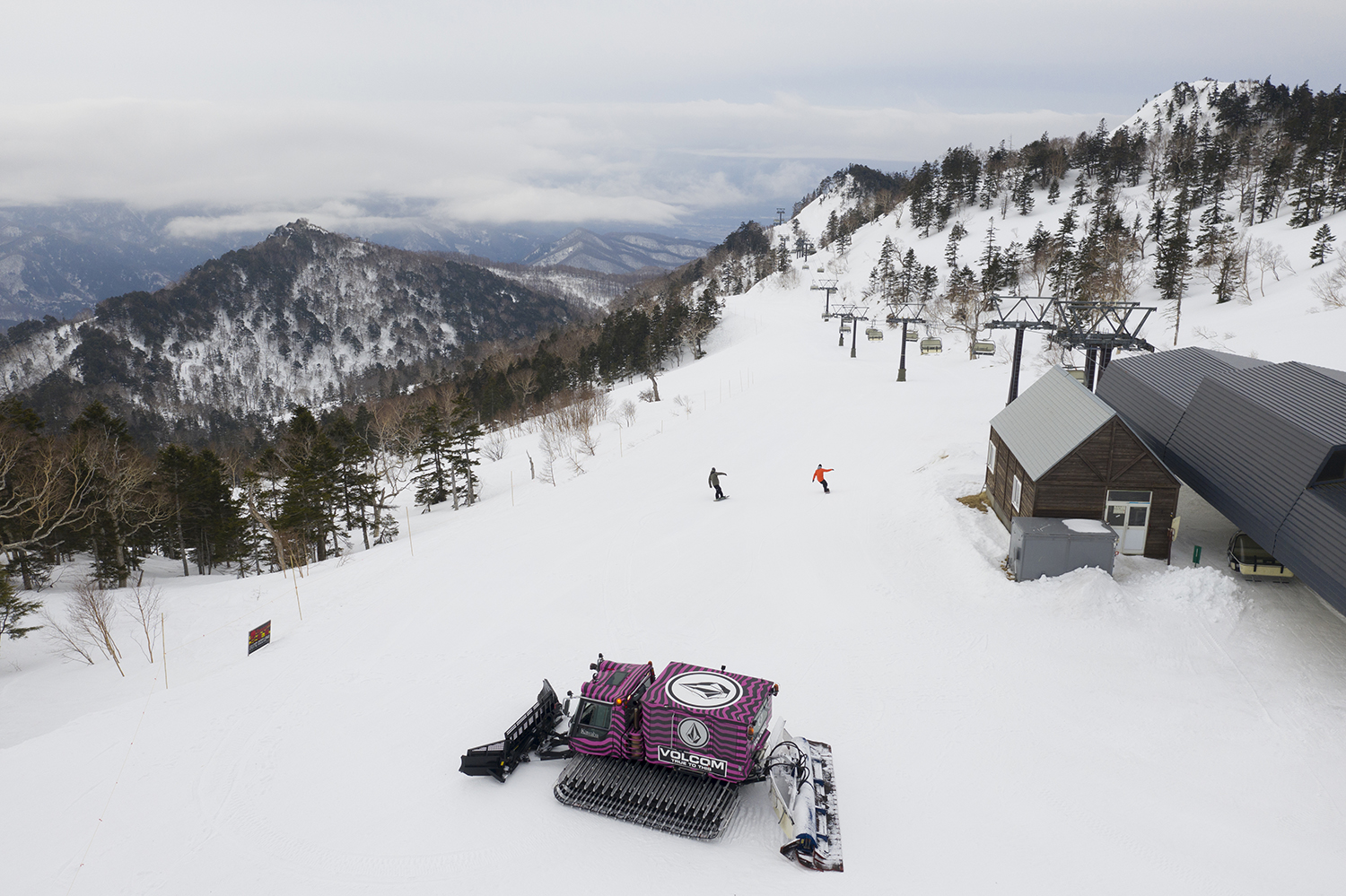 Kawaba is characterized by its excellent location that can be accessed in 2 hours from the metropolitan area.This season, we have set up the concept of "ENJOY THE RIDE" so that you can enjoy the real pleasure of free riding throughout the day.Start a new project.In the managed area on the slopes, we started to develop a new attraction course "OFF THE PISTE" where you can enjoy off-piste safely, and rental "POWDER SHAPE" to propose the fundamental fun of free riding and surf riding. Installation of "PREMIUM RENTALS".And "THE SURF RIDE PARK" which has been developed since the spring season.This park is an attraction course of artificial terrain where you can experience the unique way of playing created by Japanese culture of sliding on 3D terrain, and it is getting a lot of attention right now.

theseWhat if a local in another area slips on a river with abundant topics?Such a new attempt was realized in this project.The two cast riders are Masateru Kitae and Keita Yamazaki, also known as McKee, a mountain freestyler whose home is Hakuba Happo.For McKee, who has skated in Kawaba several times in the past, and Keita, Kawaba will be his first ride this time. What kind of line will the two draw on this slope?I followed the day on the timeline, which was an unknown number of riding sessions.

Two people run at 2:7Get on the exclusive cabin of "FIRST TRACK CAT SERVICE" and access to the top of the mountain at once.First of all, the "Crystal Course", which can be said to be Kawaba's specialty courseAt the grooming burnRiding start.At the top of the course, carving is used to carve the undulations of the terrain, and the left and right natural banks that appear from the middle accelerate the speed. MarchOnly in the spring season, the terrain on the course is clearly visible.While assessing the course conditions, the two jumped on a side hit on a sunny slope and enjoyed a breathtaking tandem ride on a shaded bank.In addition, "MURASAKI FREERIDE PARK" is developed in the middle of this course, which is also dotted with huge artificial terrain.It seems that this morning Ichiline alone is enjoying enough to hit the wall, but it has been expanded to "high downhill" after that.Heading to "THE SURF RIDE PARK"Tsu was. 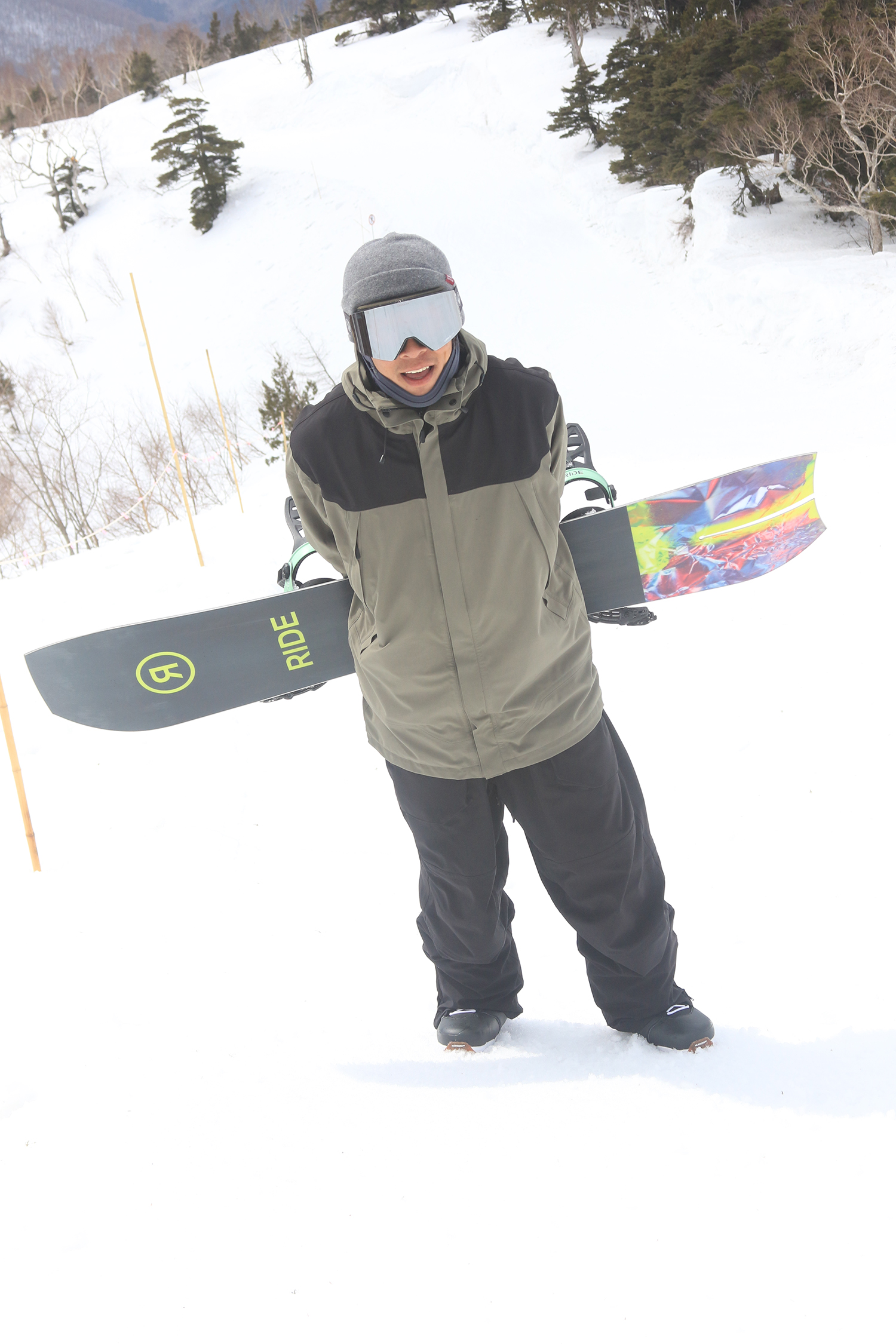 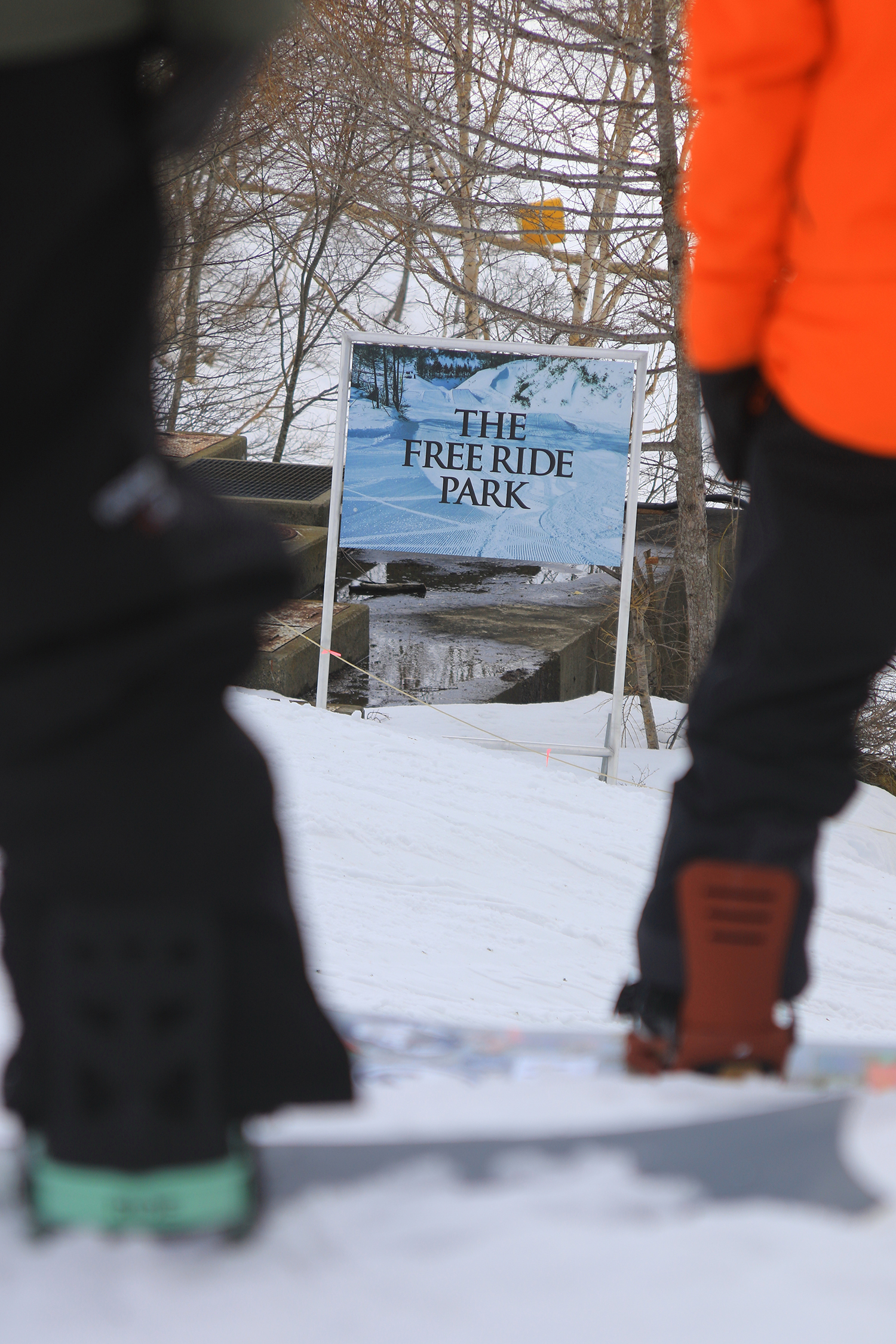 This surf ride park has snow on each corner of the course, which was originally a detour, and has a series of front and backside 3D artificial terrain banks.It can be accessed from the top of the mountain, and you can feel the G of R like a banked slalom and let it flow comfortably.It's also good to apply a lot of shots to the bank and give a powerful spray with the bank's lip like surfing.With surfers paying attention to snow surfing, this course seems to be explosively popular this season.Of course, even in the future snowboarding scene, there is no premonition that it will become a major spring park.McKee and Keita also matched this bank terrain and fascinated the surf style riding that Hakuba Happo does not show easily.

Two people who enjoyed carving and terrain / bank ride in the morning had lunch in the daytime, and in the afternoon when the snow was loose.I went to a freestyle park with "FLUX PARK".This park is completely produced by FLUX riders and remade every month.There are kickers and spines at the top, and banks are also maintained on the slopes of those sections.Rails and boxes were installed at the bottom, and the layout was satisfactory for all styles of slippers.It seems that the two of them are less likely to enter the freestyle park these days, but when they point the camera at it, the switch turns on and it's a good idea to leave a picture of the full style. 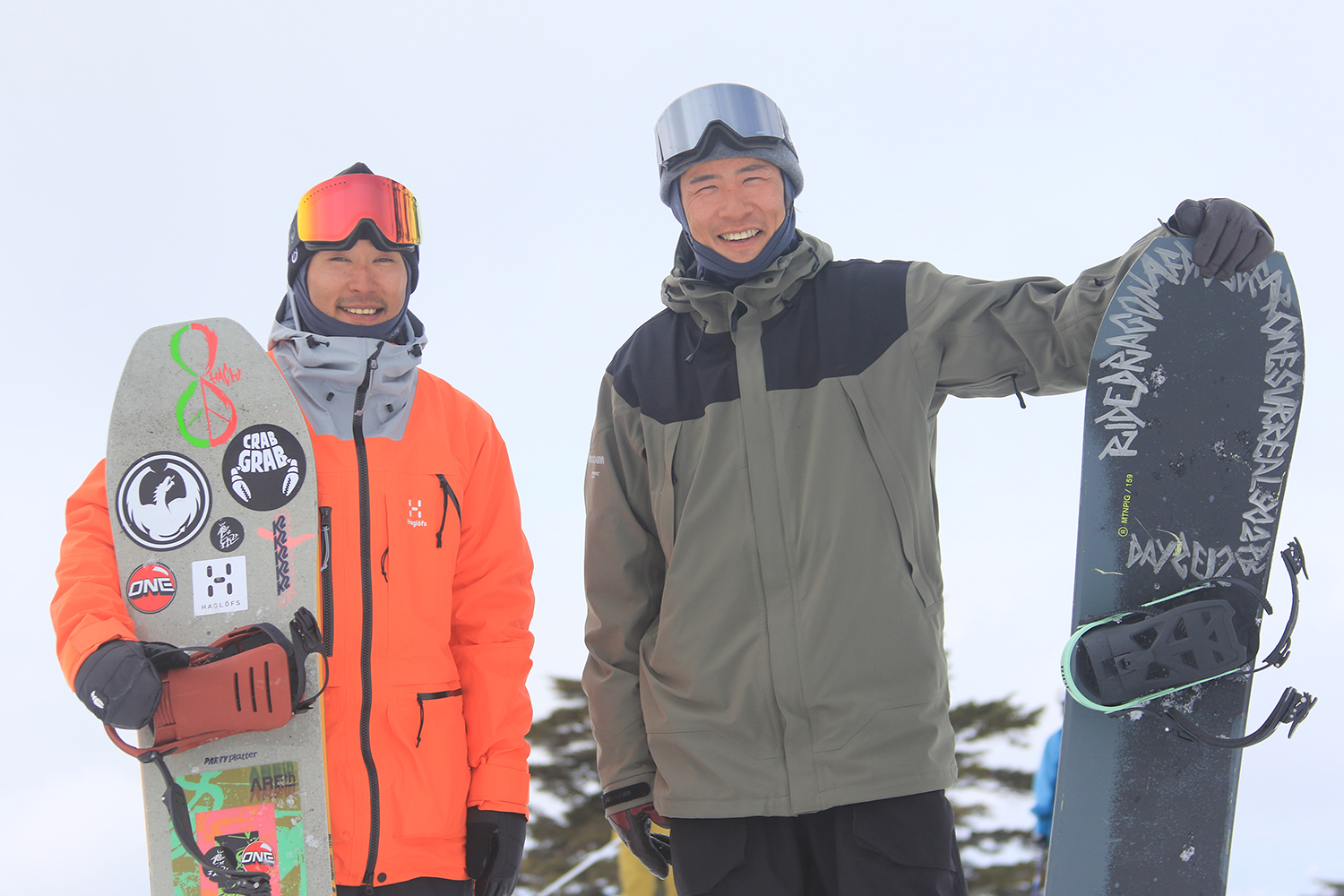 After that, while playing several top-to-bottom lines, they found hit points with their sensibilities and continued shooting.In the local Hakuba area, they embody all styles of mountain play, from steep lines to side hits, but here in Kawaba, we were able to see their new style according to the terrain and slope of the mountain.So how was the feeling of actually slipping in Kawaba?Finally, I got an impression from two people.

"THE SURF RIDE PARK TheThe best.I want Hakuba to have such a forest road. "By Masateru Kitae

"The charm of Kawaba is the wall. I can't think of any other ski resort where the wall is so interesting. The terrain of the basin makes it possible to connect lines all the time, and the slope is moderate and the speed is high, so the wall. I think it's nice to be able to choose the line that slides on your own, and to challenge various things according to the level. In the morning, choose a crystal course and carve the upper part. If the snow is loose while exploring the wall from the middle, it feels like flying with a side hit. The top-to-bottom flow of the slope was the best. "THE SURF RIDE PARK" was requested by everyone to build a bank on the forest road. It feels like something is finally made.I want Hakuba to have a forest road like this, like playing with the entire mountain.If everyone skates on this course, the line they see will change, and I think it will be a chance to have fun.Kawaba is a slope where you can go down from the mountaintop to the terrain, banks, and parks while playing, so I like to be able to play all the time without any slack.The difference from Hakuba is that Hakuba has a higher slope, so the speed is faster, so it is a way of playing with high speed.On the other hand, Kawaba seems to be a hit, looking for a place where you can play while wandering around at a medium speed.Happo is faster, so the walls are pinpointing, so the feeling is completely different.If the slopes that make use of the terrain of the entire mountain, not just flat burns, become widespread like Kawaba, the individuality of each mountain will come out and the scene will become more interesting. "——- Masateru Kitae

"KawabaAnyway, the wall was comfortable "by Keita Yamazaki

"This was my first time in Kawaba, but it was fun. I think it's the most interesting slope for snowboarders because there are countless walls and you can climb comfortably wherever you go. There are quite a lot of beginners who are slipping. I felt it, so I think that if a person who is slipping in comes, I can slip on a different line without suffering from it. "THE SURF RIDE PARK" slipped quite a bit, and it felt good to bend like a banked slalom.Was under it"MURASAKI FREERIDE PARK"I also like the terrain of.Both can ride like surfing, and you can even fly on the platform.The freestyle park had a beautiful kicker and an interesting layout.The crystal course had both front side walls and back side walls, and above all, the first pisten in the morning was comfortable.Kawaba is a mountainous terrain that is completely different from the ones that you normally slip on, and Hakuba may be close to Iwatake or Tsugaike.There are some courses with slopes, and I'm also interested in the powder from the top season "OFF THE PISTE". "THE SURF RIDE PARK"There are 3 banks on the front side, you can go fully open and turn comfortably, and you can also slash.Everyone was in the train, so the banks are growing and it's great.Anyway, the wall feels good. "——- Keita Yamazaki