Climb the snowy mountains in the middle of the night with headlights.What is the daytime backcountry that I have experienced many times?I had a different feelingMari Mizukami.SheI will spell out the state of BC mountain climbing before dawn that I experienced for the first time.
Text by Mari Mizukami

On Saturday, March 2017, 3, I was supposed to climb the mountain with my headlights on for the first time.I had climbed the mountain early in the morning, but it was the first time for me to climb in the dark forest with headlights like an expedition.The south slope I found when I climbed Mt. Shiga last season.If you climb from midnight, you can reach the point while the temperature is low, so the snow conditions should be good.This was another reason for deciding on the backcountry before dawn.

I got up at 2:00 in the middle of the night and headed for Mt. Shiga.Mt. Shiga first puts one car on the way home and takes a route that goes to the vicinity of the climbing entrance with the other.Since there are few people to climb, the impression that all the slopes are fast-tracking mountains is strong.

I was planning to turn off the lights early last night, but the day before, high-quality powder fell on Okushiga, so I ended up slipping until night.I'm not exhausted, but the powder at this time is precious and a top priority for snowboarders, so it can't be helped.

The hike in the middle of the night had a narrow field of view, and I couldn't see anything other than the feet where the headlights illuminate the pitch-black interior.I had climbed Mt. Shiga several times before and knew that it would take 3 hours one way, but in the dark, the sense of distance was completely different, and I passed the place where I had to turn.

The members are rider Yuji Hara and friends who like mountains.When climbing the Shiga Kogen, Yuji, who is familiar with the mountains in this area, often takes us.He is a reassuring companion because he has both riding skills and knowledge.This time, I was the only girl, so I took short breaks so that I could hike quickly, and gave opinions on the snow conditions and wind direction so that everyone wouldn't worry too much.I feel that when I move my body in nature and take the morning sun, my body and mind become healthy.The air is clear and refreshing.The rising sun gradually began to brighten, and by the time we reached the summit, the weather was completely bright.

Talk to your friends about the lines and speed you have in mind.Since the snow quality cannot be known until the first track is actually slipped, we try to share the information we felt with each other and solidify the image.Since the south slope is exposed to the sun, it is difficult for snow to combine and layers are likely to form, so there is a danger of avalanches.At the pre-meeting, we will share the information we have, such as the temperature, wind direction, and snow conditions that we felt during the hike, such as "I felt the snow was firm and stable while hiking the ridgeline." ..

The mountains were snowy at night, so the morning came cold and the snow quality remained very light and fine.I couldn't take the approach vertically, so I went around to enter diagonally.I couldn't see the terrain from below or from the side, so I had to slide down to make a decision.Think about the time when the part that could not be confirmed was not slippery, and at that time, make a firm image before dropping so that you can stop immediately and escape to the side.

I speeded up and dropped in.
"Light! 』\

It was the best moment when I climbed up to this point in search of this feeling.

Even in Haruyama, the night hike, which starts climbing in the middle of the night, arrives at the slope where you want to slip when the sun rises, so the snow that has been cold all night is very light.Besides, hike in the daytime is a place to wear a face mask even if it is stuffy so as not to get sunburned by the reflection of the sun, but in the middle of the night there is no worry of sunburn and it is quite big for female snowboarders to be released from the hike that is stuffy. It may be that.

In the backcountry, in addition to the quality of the snow and the beauty of the mountains, there is a deep sense of fulfillment when you finish the challenge, a feeling of stronger friendship than when you slide on the slopes, and various elements.If you snowboard more often in a new environment, your experience points will increase steadily.Therefore, I thought again that I would like to continue trying things that I haven't experienced yet. 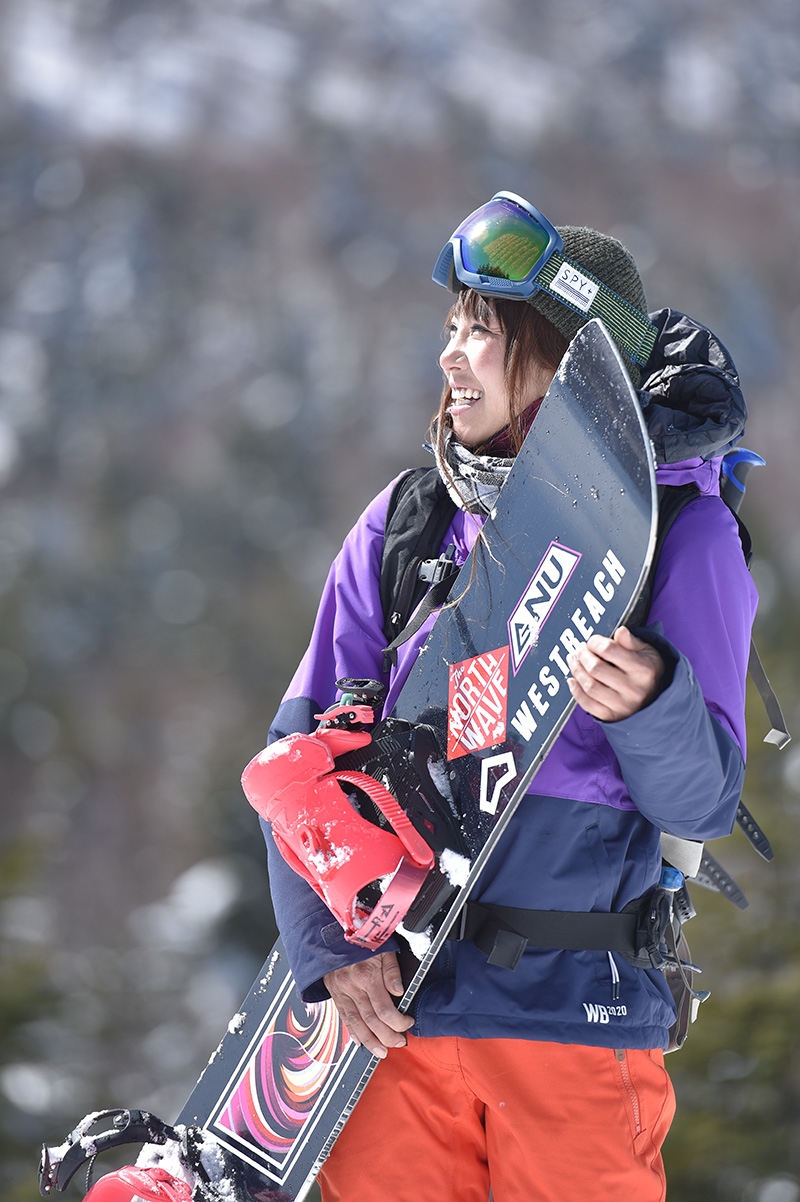