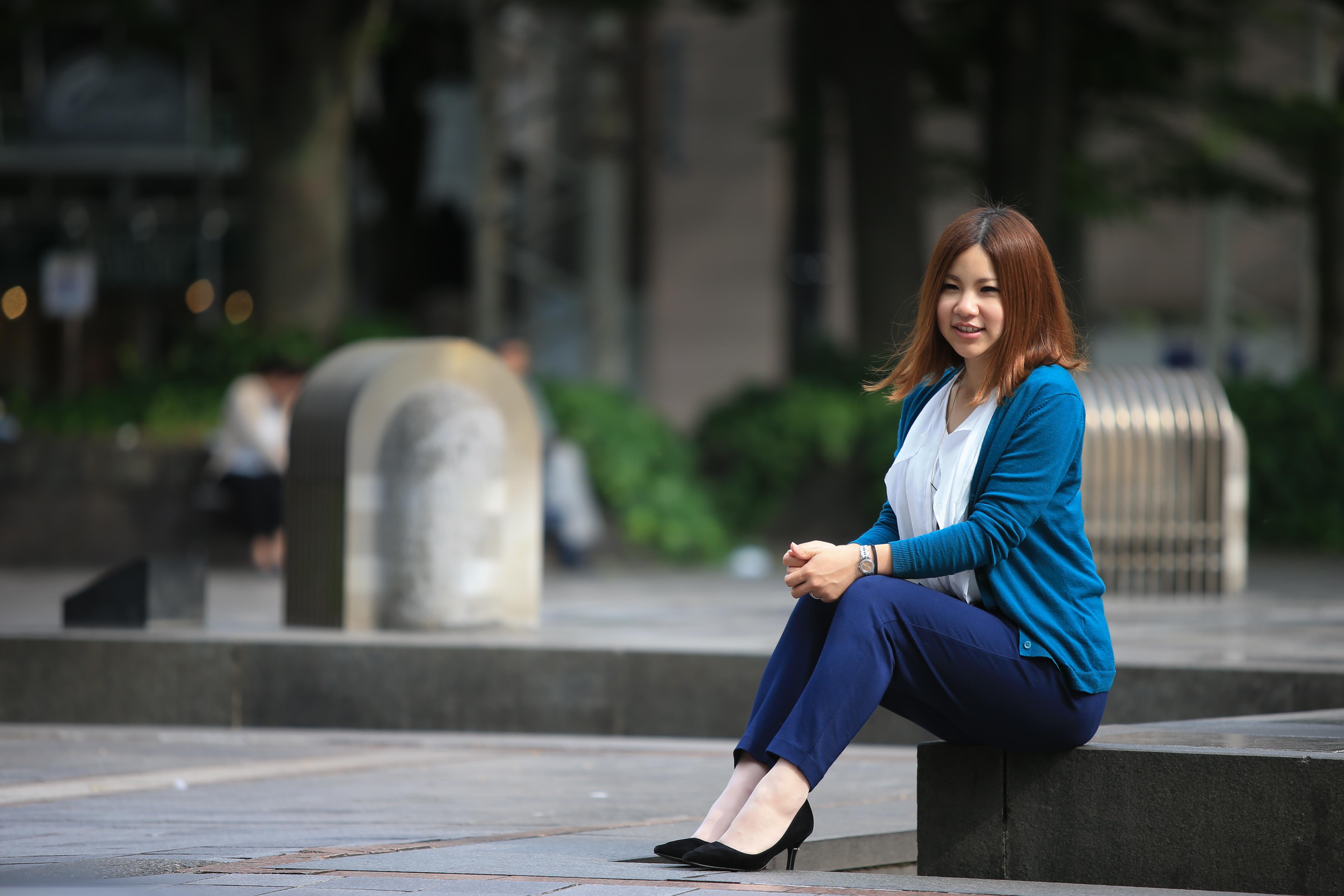 The word "Emi Kato" style, which boasts the No. 1 jibing skill in the head snowboards Japan team, is the most important thing for her, and she is a rider who is "cool". In a DVD production called CANDY, he left PART in last year's work and definitely showed off his No. 1 skill in the jibbing style.Why choose "HOPE" and the riding style that comes from her commitment to style? !!Is open to the public in an interview. 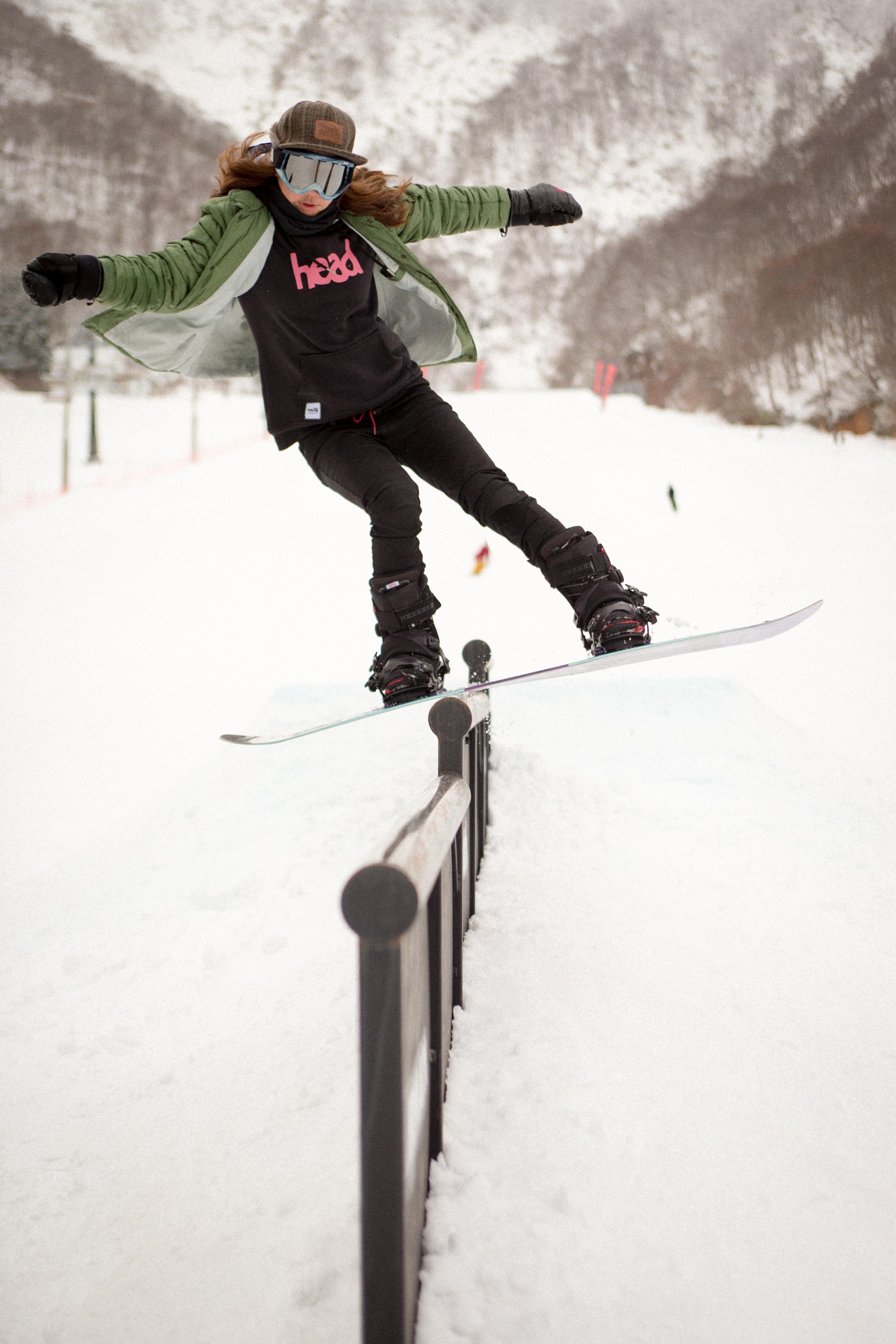 Q1 What kind of riding do you choose?
I use it for all rounds.

Certainly you are always riding!

Q2 What are the features of HOPE?How is the ride?
Since the waist is thin, torsion (twisting of the board) is easy to come out, and it is very easy to grasp the trigger of the turn.And although it is light, it is extremely durable.Thanks to the strong strength material called graffin in the middle of the board, it is light but stable.I'm the King of Destruction, and I don't have a board every year, but it didn't break even on the street.

Thank you for your comments as per the textbook!Lol Anyway, the ride is light and durable (strength)!The landing on the street is shocking, and Emi-chan ... there's no way to fall!Lol I'm really into Emi-chan's style of snowboarding with a lot of torsion.

Q3 What do you like the most?
I especially like jib, but when I hit it diagonally or step on it, the board easily warps and makes the style look cooler than usual.I also like Japanese-style graphics and calm colors.Color compatibility is perfect with Vine's NX FAY III ◎

It's easier to get the style out than usual!In the picture below, the board is twisted and the style is too much! "cool" 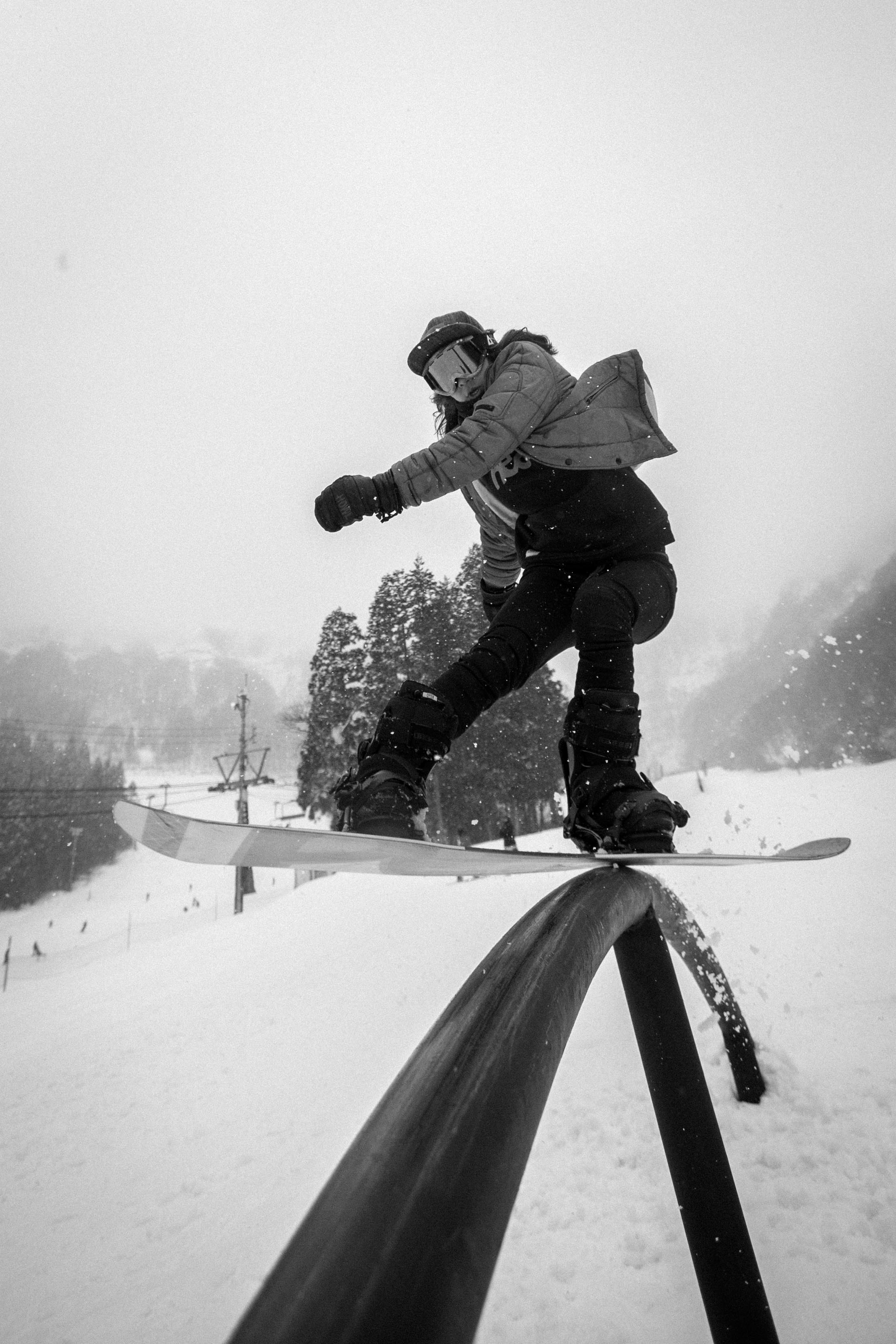 Q4 What are the tips for riding the Hybrid Camber DCT?
As it is easier to turn, I think it will be slippery if you move your eyes in the direction you want to go faster and place your body firmly in the center of gravity.The rest is the trick of WAX, but there are some parts where it is a little difficult to hit your feet, so if you use a few sheets of waxing paper, you can use it well.

The operability is good and fast, so be careful not to delay your eyes! Advice to WAX!It's a stone's throw!

Q5 How is the model used for jibbing?
With the same principle as the ease of turning, you can make a "tame" using torsion, so it is very easy to spin in and out.Also, if you catch the press system under your feet instead of outside your feet, it will rise easily, so I'm happy that you can be cool.

I like the comments that are unique to Jiba!It means that it is a model that can perform well even at low speeds.It's really nice to be caught at the feet of the press.This photo captures the item firmly at your feet. 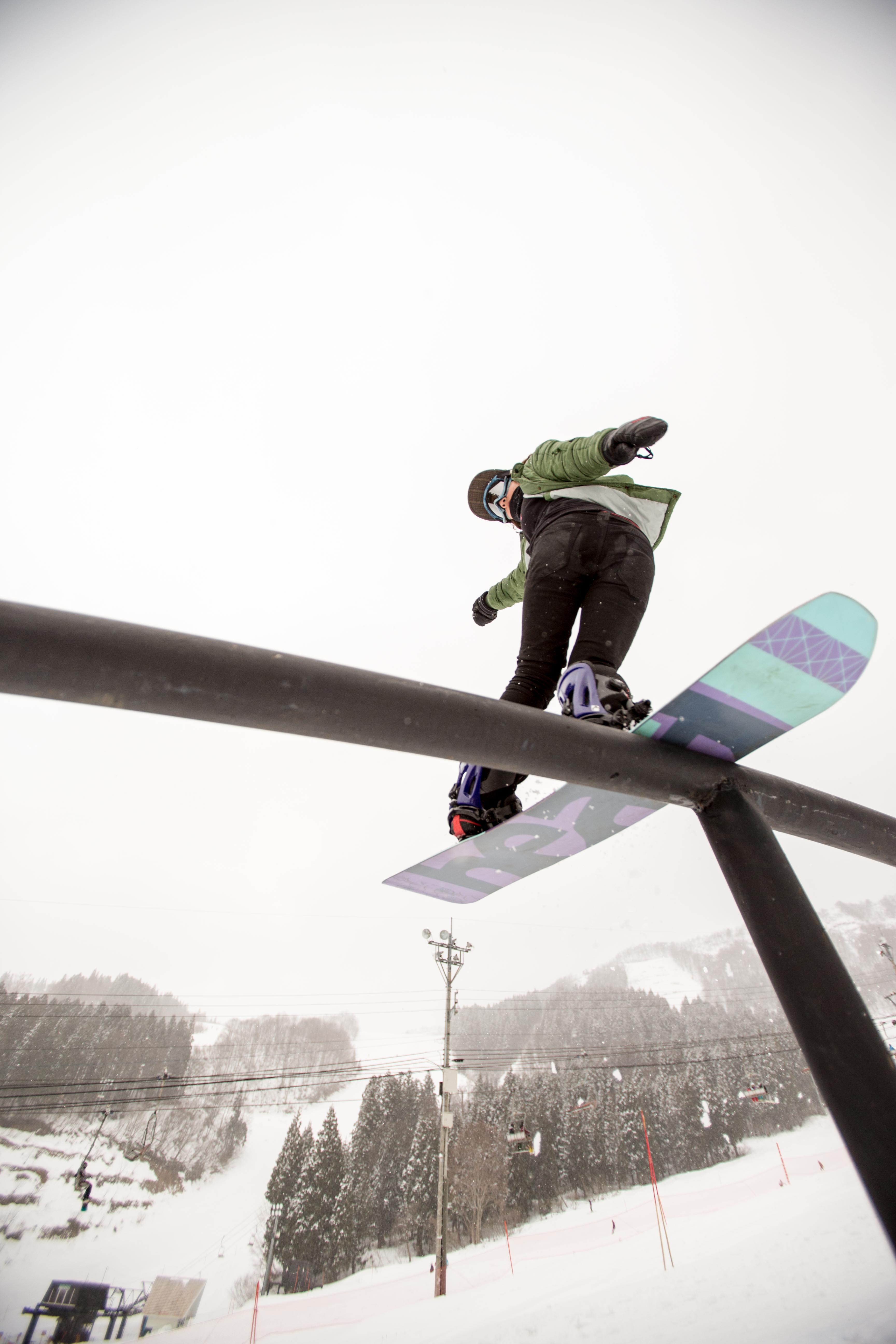 Q6 What kind of riding is easy to ride?
It is easy to pick up unevenness on hump slopes, so it is necessary to step on it, but on the contrary, it is very easy to slide on powder.

In rough places, the point is to "step on" the DCT structure to match the snow surface well!With powder, it's easy to raise the nose, isn't it?

Q7 What is the sole with high gliding properties?
I often hike when practicing or shooting, but I'm lucky because the distance of the hike is short because the sole runs!I have plenty of physical strength, so I can slide a lot!Lol

Certainly, the only board in the LIBRA series that uses sintered material!It has a high gliding property.Emi-chan, who has a lot of hikes, has such a merit!interesting! !! !!

Q8 A word for those who are riding HOPE and those who are interested!
Due to the shape of the W camber, it is difficult to produce a torsion, but this DCT has evolved with a narrower waist to make it easier to produce. I want you to get on this board and make a turn because you only have to do it once.You should be able to feel the difference!

I think "Emi Kato" and "HOPE", which are especially effective for twisting at low speeds, are a good combination.Thank you for the interview. 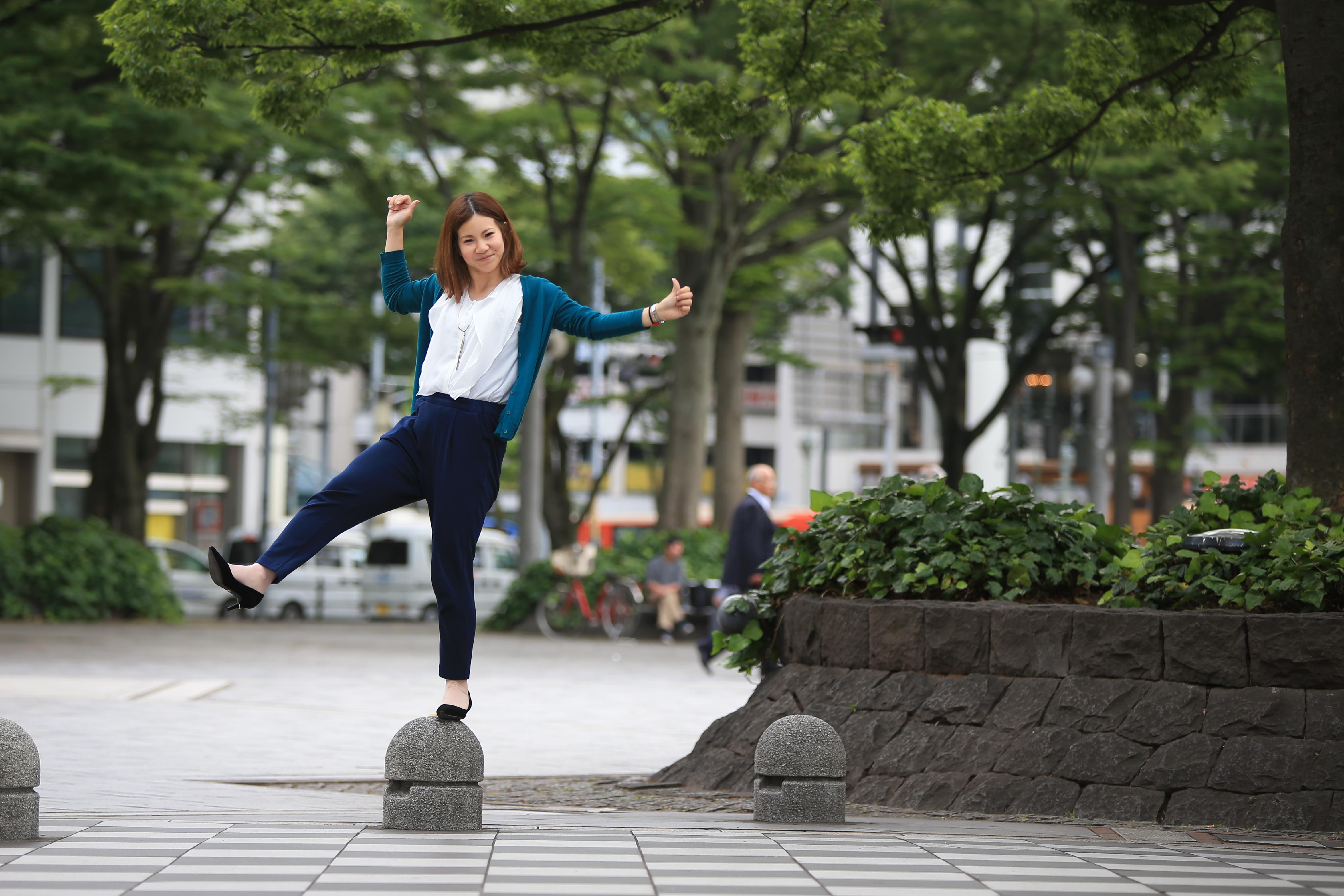