It's a long time to write a little event together.

The day before I checked out the hotel, I went to a manga cafe.

To relieve the muscle pain I got during the shooting and the tournament on the third day.
No, a change of mood?
To get rid of the tension.

I just read manga! ??
However, it is the pride of top amateur manga sir that even this long stay feels normal.

On my way home, I checked NAVITIME from the hotel to Mankitsu and found that it was 2.3 kilometers, so I thought it would be difficult to walk.

There was an incoming call from Katsumi with Yuji who had just eaten and returned in the city of Sapporo, and he took the trouble to take a detour and came to pick me up.
Thank you! !

By the way, when I tried my best to walk, it was farther than I expected, so my flank hurt ...

After returning to the hotel, the three of us went to Casshan's room for some reason.
Then Kaneko in the next room also gathers so that it can be attracted.

Photo with everyone on the last night before check-out. 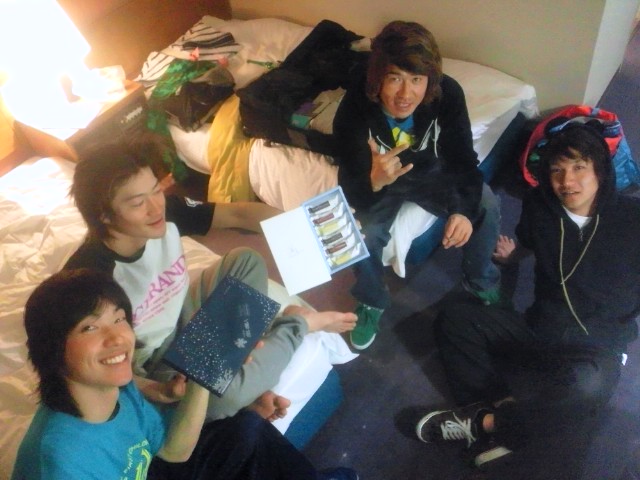 At that time, Yuji and Casshan were inwardly immersed in the afterglow of the manga.
"It's okay tomorrow! I'll definitely go with Vanivo!"
He encouraged me.

Yes, tomorrow is the last day of Park Air for me.
As I wrote in the previous blog, I was hungry because I had decided to do only SB900 stale.

Repechage on the day.

After 30 minutes of public practice, each person will fly three, and the top few will be the repechage members.

All the participants
"This year's criteria are over 900"
I knew that.Later, when Mr. Yae of YONEX support showed me the trick list of each rider, almost everyone brought more than 900 tricks.

I'm from Casshan while doing SB spins all the time in public practice
I asked them to check the flight distance and the direction of flight, and it was time to go live.

The weather was fine on this day, and the conditions did not deteriorate, so I was able to do what I always do! !!

The flight direction is straight and there is no problem with the flight distance.The landing is as clean as it can be.
You did it! !!Achieved long-cherished wish! !!

However, I didn't think it would be decided by the first shot, so what should I do with the remaining two?

Is it possible to turn it on such a small, sleeping table with lipstick? ??
No, this is a challenge! !!

I'll be amazed by the audience! !!
First of all, I will try FS900 with the same approach line as a stepping stone.This does not make a clean landing.As for the feel, can you go around twice vertically? ??It feels like.

To the people around you as if to inspire you to hesitate
"Next time I'll do double !! I'll do it !!"

I keep saying.Don't pull back later.

I said a word to Shige (Kazushige Fujita) lined up behind me.

Immediately switch to the switch stance.SB1080 without thinking! !!fall down! !!

It was a really crazy three.

However, I was able to get my own slip with the first one, so the other two are like bonuses.
As planned!Very satisfied! !!

Wait for the result in the waiting room.
I was really thrilled.

And the names were given to the five people who passed the main line! !!
it was good! !!It was really good! !!

was.But regardless of the ranking, I was delighted as if everyone had won. 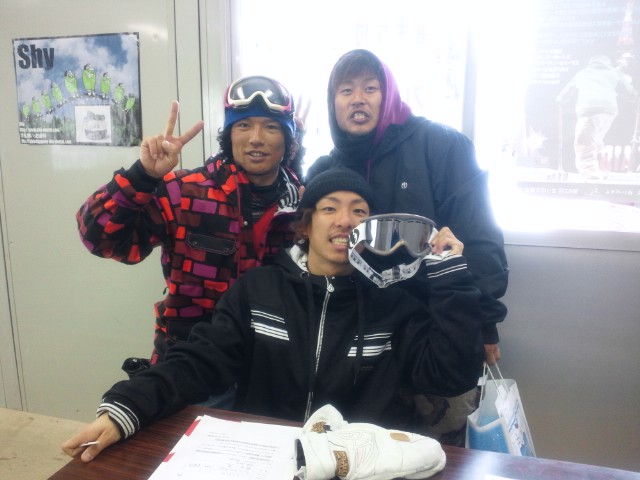 In the photo, the top three are me on the left, Shige in the middle, and Yang on the right.

After that, Kachi-kun and the Nomatter shooting crew were pleased with us at the same time as the interview.Kachi-kun was still pulling on the skin of his neck.
It means congratulations on your last-minute survival.
I hugged you.
Kachi-kun (albeit a judge) said that I was happy to slip in the prize.

I lost here last year and spent a year experiencing the regrets of losing in qualifying and the pain that followed.
Although it is exciting in Hokkaido, this tournament is not treated as bad in Honshu, but this year there was no more pressure and tension.

Perhaps the season is over and the most tense, frustrating and delightful tournament of the season will be Park Air.

Looking at the list, considering the faces and contents of the participants, the emotions of the riders, the number of spectators, etc., it is definitely possible to take up more in Honshu, it is a tournament. 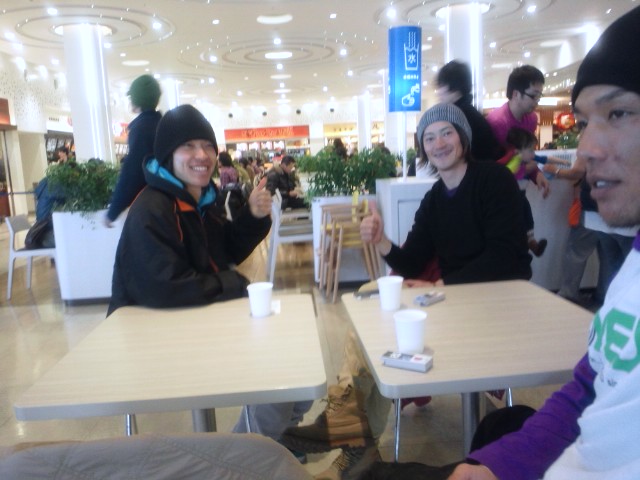 On the way back, Casshan and Kaneko will send me to Chitose on the way to the ferry.
It was really good that the result was that the two people didn't care about the air along the way! !!

The photo is at Mitsui Outlet in Kitahiroshima at lunch time.

These two people decided to go to the TBA final qualifying first, were pushed messed up, and received the most support.Thank you so much!thank you! !!
Let's get in again with three FCs at the end of the month! !!

Above all, this year's theme is
"Thank you"
.

I'm grateful to everyone who has always supported me, but this year, more specifically, people who support each and every action, approach, omission, grab, landing. I was aware that I was feeling the same, and I was trying to act to fulfill my responsibilities.

If any one is sloppy, it lacks the sense of responsibility that I carry everyone's feelings.

I don't want to say that I should be able to enjoy slipping, but I want to put more weight on my slipping with the feelings of each person.

As a result, I think I can make a slip that I think was "fun!"

To be honest, when I lost on the third day, I wondered if I was under pressure because I was carrying too much on my back.I thought, but that's not the case.This was good.
In this repechage, that seemed right.

It's still the first race of the season, and I'll do my best to slide with a bigger feeling on a bigger stage in Makomanai! !!