Two FC Osaka events on Saturdays and Sundays led by Casshan in Namba! !!
The person himself is also a local, so he is quite enthusiastic! !!

Of course, we are not a guest who was called because we are FC, but we will be quite enthusiastic as our event! !!

First Children are coming to Osaka for the first time in 3 years! !!
From the evening of Saturday, October 10th, Osaka Minami is a club in front of Americamura Triangle Park.

"First Children Party" will be held at the triangle! !!

On the day of the shoot, we talk and drink with everyone at talk shows and floors with lots of stories that we can't usually hear, such as behind the scenes!

Largo Night Crew DJ Yukinari, who is widely active in clubs such as Osaka, and singer Mayca (Gekokujo), who is a member of the DJ, will liven up the FC Party together!

As a pre-event, the First Children 16th DVD "Dangerous March", which was very well received last year from 00:12, will be screened!

Last year's excitement and laughter will be screened again on a big screen and loud sound! !!

The main event will start at 17:30!
Finally, the First Children 13th DVD "ALL FOR ONE" will be screened.

FC's original images, the rider's hot soul, and whether the Demon King will come again this time! ??
I would like you to see the DVD released after the Nagano, Nagoya, and Tokyo previews in Osaka as well.
The screening from the beginning of the party will bring the venue's voltage to the climax at once!
There are also DJ time, artist time, and gift lottery!

You can buy advance tickets at the above shops! !! !!

Let's all laugh together! !!

DJ / DJ Yukinari (Largo Night Crew)
Started activities in the early 2000s and formed Largo Night Crew
From activities in extreme sports and underground scenes
2008 Started full-scale activities in the CLUB scene based in Osaka!
The original SPIN style is a sharp scratch and two pieces
While focusing on Hip Hop, genreless Japanese, Western, new, old, over, under
Rock the floor with a wide selection of songs interwoven!
Don't forget your style as a DJ who sends sounds even during play according to the situation
Zeebra, Rino Latina ?, Sphere Of Influence, L-Vokal, SEAMO, etc.
Take the opportunity to perform with many major artists and aim for even higher heights!
Also active as a truck maker and producer for Largo Night Crew, with Crew
Be careful of future activities!

Singer / MC
Mayca (Largo Night Crew)
Experienced appearances in many Big Party as a member of singer unit VIB
In 2007, he joined Largo Night Crew and started solo activities at the same time.
The style of being heavily influenced by Mariah Carey
Melodic and powerful songs based on R & B, HIP HOP, JAZZ
With an overwhelming voice volume and a beautiful soulful singing voice played in the range of 5 octaves
Sing up.
The range of activities such as JAZZ band Vocal and acoustic solo live is not limited to the Club scene.
As a producer, he started his own label and actively composed and produced singers.
Has a high reputation.
Don't forget the style of being one artist
Zeebra, m-flow, Sphere of Influence, Rino Latina ?, L-Vokal, DOUBLE
In competition with many various artists such as SEAMO, to go up to the field
Explore the roots of your own sound and continue to hone your skills every day! !!

In 2003, Osaka formed Hip Hop Crew based in America-mura and started his career at the same time.
Let
From the beginning, he has participated in various parties regardless of size or location.
After that, after working in several groups, in 2006, a further leap forward.
Sweared and started solo activities.
To date, many Guest Artists (DJ BIG) both domestically and internationally
SYPHE (from LOS ANGELES / POWER 106) /
Yamaarashi / LAMP EYE / TWIGY / Mousouzoku / DABO / EDO… and more)
Serving as the MainAct / Front Act, when there are many, he manages more than 100 stages a year and steadily
I'm getting Props in the field.
In addition, providing music for many Release works, participating in feats, FM
Proving the high degree of attention by being picked up on the air on Radio and on Media such as Internet programs.
Live at Big Stage such as CLUB QUATTRO and Osaka Castle Amphitheater
He has also experienced and actively participates in local events and school festivals.
In addition, he himself is a Regular Party (BasicStance @ AtlantiQs / Luff ☆ Create)
Aggressive and Tight Stance, such as regularly organizing @Ogiya sunsui)
So, I am still expanding the range of activities.
With "living music" as the motto, Life Style itself is the work
It captures and melts the emotions of everyday life into One loop.
Lyrics that are spun out as they are life-sized, and also
In addition to the well-established Rhyming Skill
Flexible Rap Style for any Beat,
You can feel the quality of his music from the high approach ability.
Somewhere a child, sometimes a grown-up "Real" is the resonance of the Listener
Has been steadily gathering evaluations from all directions.
Finally, he started working on his long-awaited work Release.
Whether it's Real or just Fake, it's up tonight's Live.

Being aware of HIPHOP manners, turn complex and negative elements into laughter
Wrapper to express.
Take a stance opposite to the existing rapper image that tends to emphasize the cool part
Please pay attention to the lyrics of topics that are not often dealt with in Japanese rap.
In short, "It's not cool, it's not macho, but HIPHOP !!"
Hip Hop, R & B unconventional through his own organizing event, Green Belt
Widely distributed!
Featured artist who will represent the future scene! !!

On October 10th, First Children riders who came to Osaka at the FC Party the day before gathered at the Moriyama Sports Higashi Osaka store! !!

All four FC members (Kenji Taguri, Choco Vanilla Ball Arai, Yumaru Ogawa, Casshan Yoshida) will be attending on the 16th.
Autograph session and talk show will be held from 12:14 to XNUMX:XNUMX at noon ☆

First Children members will have an exchange party in Osaka not only on Saturday but also on Sunday! !! !!

See below for details ↓ 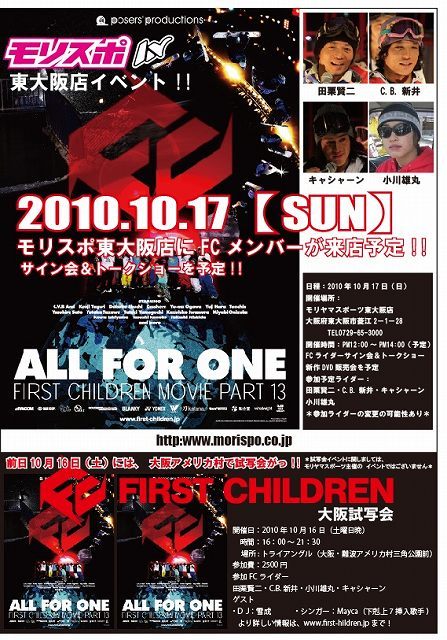 RIDE FOR A SMILE ~ Okutadami Half of the Resurrection ...