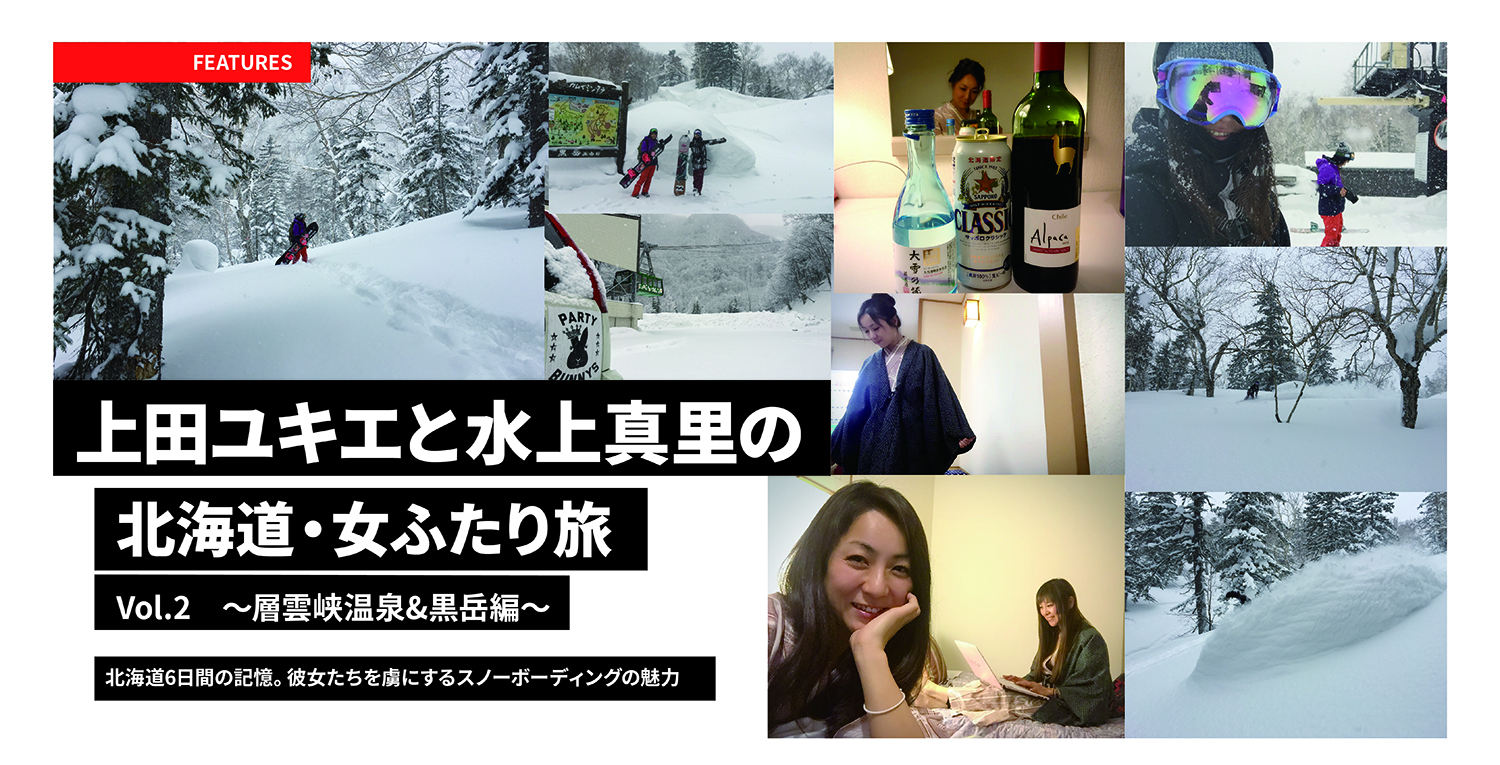 Kurodake, the first mountain we both visited
Unexpected things happen because it is a land you do not know

The next destination is Sounkyo Onsen at the foot of Mt. Kurodake.It took a two-hour drive to Kurodake, which is located just behind Asahidake.Although it is very close to the map, I have to go around once in the direction of Asahikawa city.However, it is this drive that resets the feelings and excites the excitement of the new land.I thought in the passenger seat.

By the time I arrived at the Sounkyo Onsen town, it was already pitch black.Immediately I soaked in the hot springs, and Mari went for a walk to see the icefall festival.Is this the difference between the years (laughs)?The sound of fireworks echoed to the room, and I could hear it even when I was older than I had already opened beer in the room.

I wonder why, even though I'm with you so much, I can't stop talking even after I'm in the duvet.I have to go to bed early.Rather, there is a topic that does not come up until after entering the futon.I was sleepy and stunned, but I couldn't stop talking and laughing, which was a problem every night.

Kurodake was the first mountain for each other and was one of the mountains I wanted to visit.Moreover, it was the day when the lift service started in the latter half of this season.However, it was forecast that the weather would be rough, and I heard that there is a high possibility that neither the lift nor the ropeway will move.It can't be helped, the duration of the trip is fixed.It's luck to hit the snow and the weather.

We were waiting at the ropeway platform at 8:9 the next morning.The weather seems to be unexpected.However, there was no one other than the employees, and there was no other customer's car. I was wondering "What is the charter?", But after getting on the ropeway that moves at 9 o'clock, the upper lift does not move until 1 o'clock, so those who know it came in time with the XNUMX o'clock lift.We don't know that, we get on the first ropeway and talk to the uncle in charge.I finally figured out what was going on, but it was too late. I had to wait for almost an hour.Unexpected things happen because it is a land you do not know, and it is also an element to enjoy.I was flirting in the snow cave that had been set up, I was surprised at the height of the snow wall, and I waited at the lift platform early if I couldn't get the first ride when I came here.In the meantime, good snow continued to fall.
When I finally climbed with the moving lift, it was even whiter.If it's sunny, you can hike up from here to the top and glide through the wonderful scenery.As a beginner of Kurodake, we decided to use a lift for the time being.It is a reserved state because it is a weekday.I think we saw about 15 people in total on this day.
Special Thanks: Daisetsuzan Sounkyo / Kurodake Ropeway Kurodake Lift http://www.rinyu.co.jp/

The course I heard from my uncle and the snowboarders of Kurodake enthusiasts that day was like a reward given by God and entertained us all day long.For lunch, I shared the emergency food and bread in my backpack and pocket on the lift.Once I got down to the lower world on the ropeway, I wasn't confident that I would come back, so I was eager to slip as much as I could and go up early to move, but it was sweet.Mature women who love snowboarding couldn't have been so easily satisfied.After all, I continued to slide non-stop for more than XNUMX hours, and after returning to the car again, I noticed that each other was sick.Even with this, he stopped asking "Would you like to go for another one?" And came down while saying, "It's important to draw! We've grown up too!"It can't be helped because there was so much snow and terrain there that made us addicted. 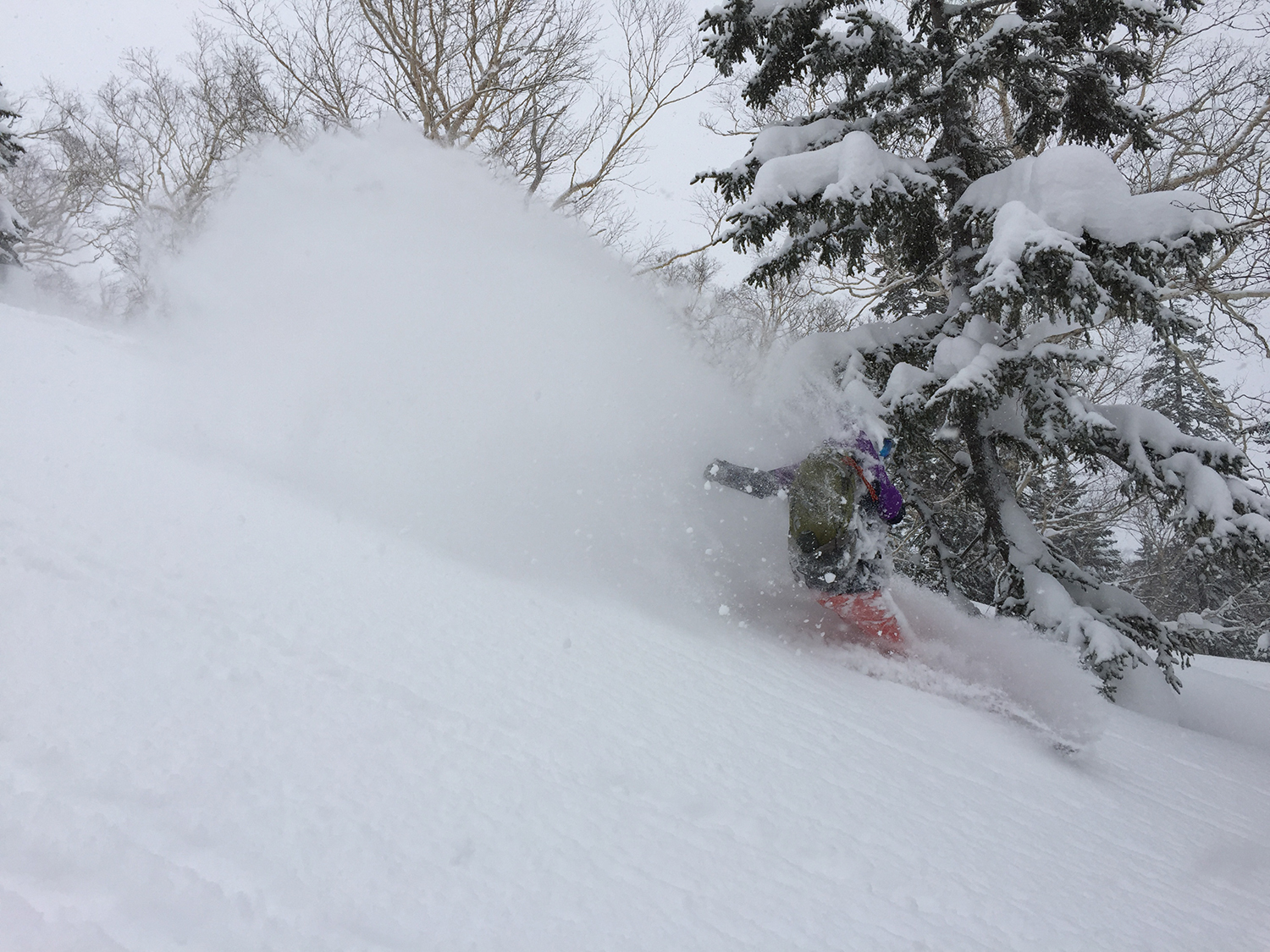 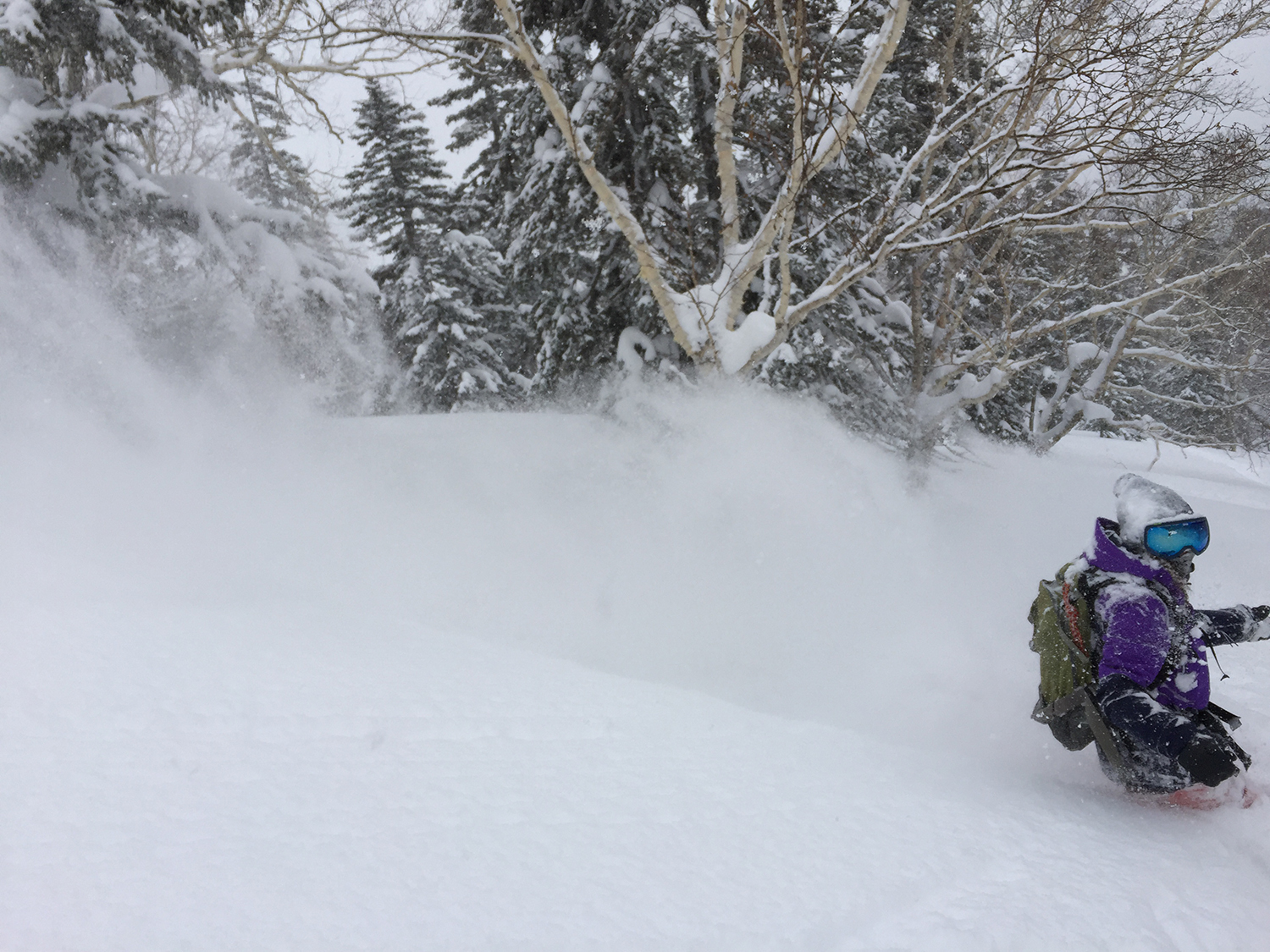 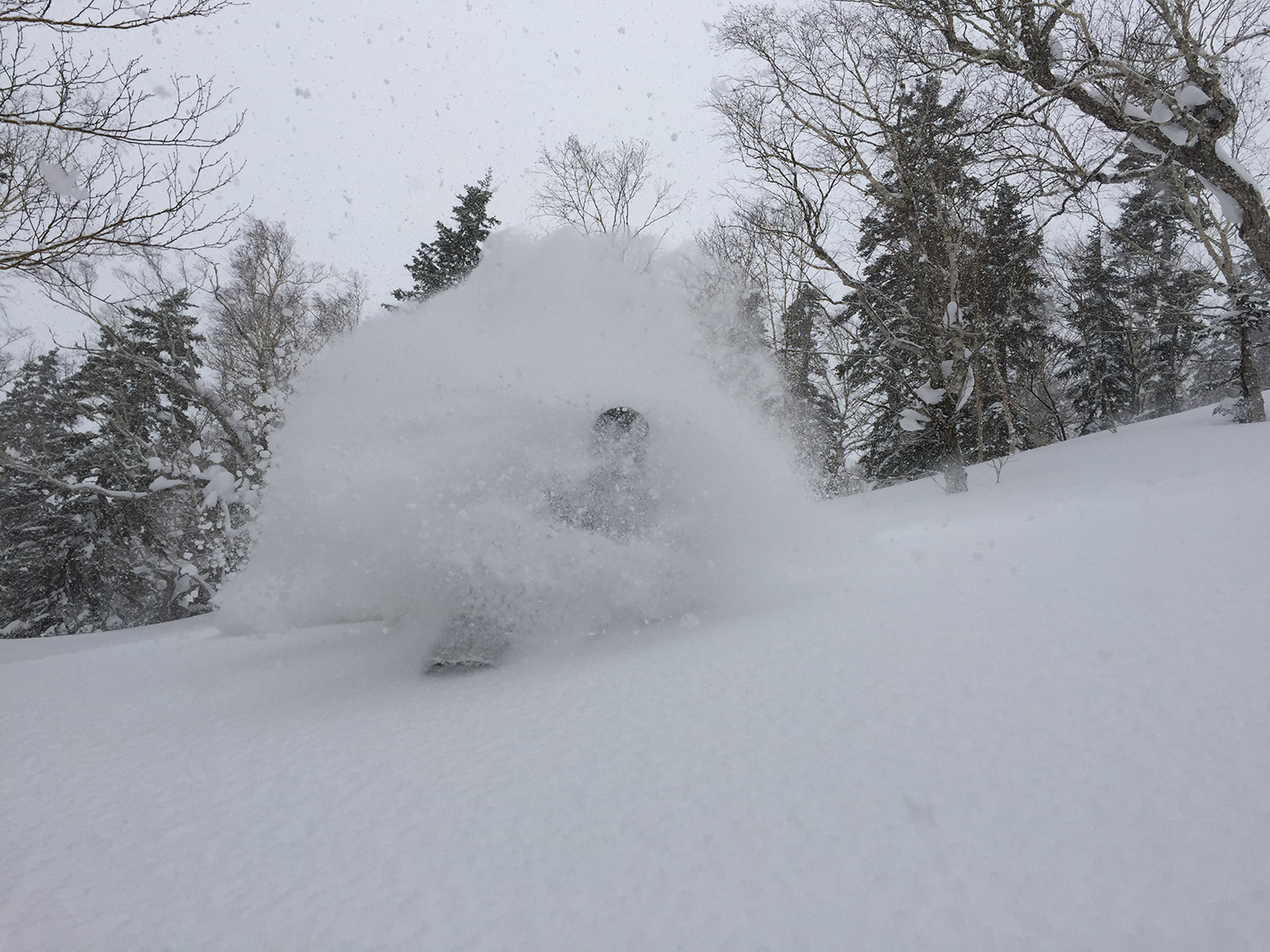 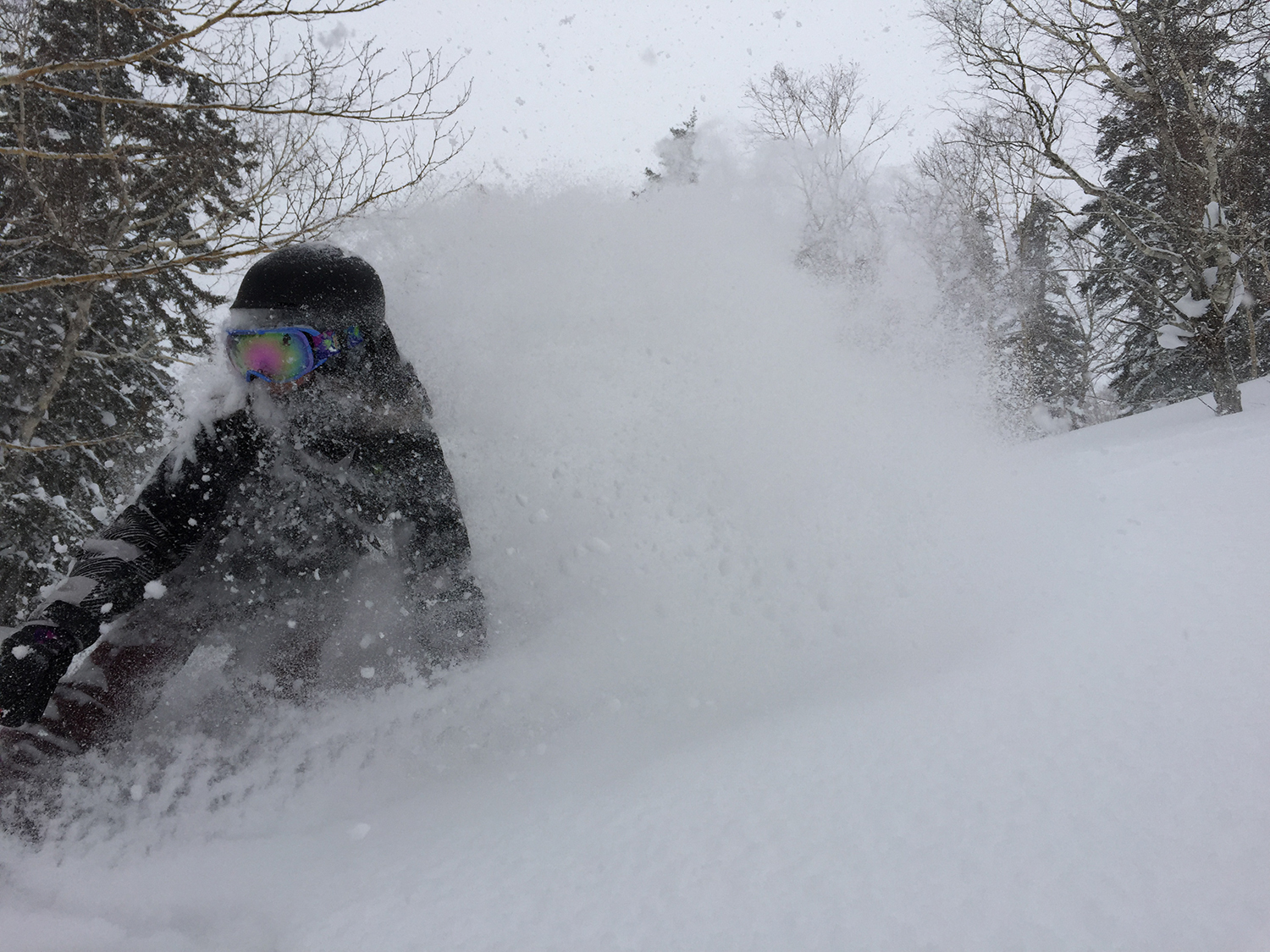 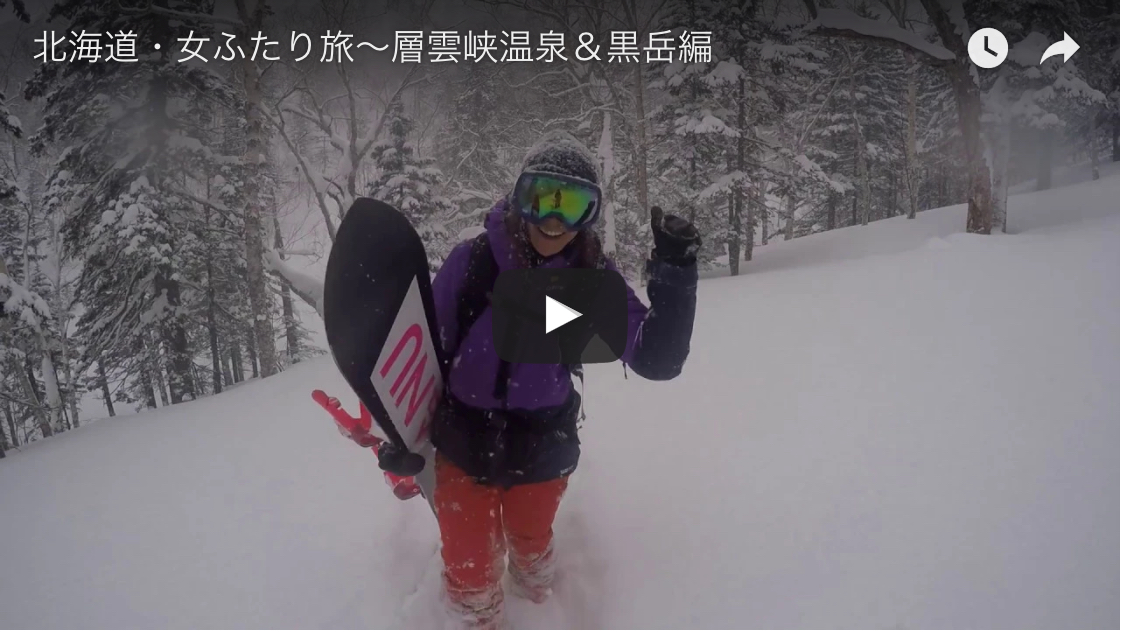 After leaving Kurodake, I took two hours to move to Nayoro.
That snowboarder who won the world, an important person on this trip, was waiting there.

Next time, one week later, "VOL.1 ~ Nayoro Edition ~" will be uploaded.
looking forward to!