This time I decided to ski at the Grand Hirafu ski resort in Niseko.

Niseko has many tourists, skiers, and snowboarders who also visit from overseas.

It is called.It's a special light snow.

And this place is one of my favorite ski resorts.

It was 15 years ago that I first skated on Grand Hirafu.

At that time, I was allowed to slide on a TV program in Hokkaido called snowsweet life.

At that time, I was a backcountry member of a girl named Brighta.

I was skating from here.

On days when there was no shooting, about XNUMX girls skated like a race from top to bottom.

To be honest, I couldn't remember the course at all at that time because it was too wide.

I didn't have much chance to come from there,

An American girls camp that has been held in Niseko for two years.

I was called by a BTbound coach and decided to skate again in this area.

I was able to remember the feelings of those days, and the snow quality was still the best.

I regret the years I didn't skate in Niseko.

I even decided to come from there every year.

I've been staying in Niseko for XNUMX weeks since early February,

This year's snowfall is amazing.Anyway, it piles up.

It's a disaster level.

In fact, the hot spring area in the mountains was temporarily closed due to the lack of snow removal, and without knowing it,

I went to the hot spring area alone and got stuck in the parking lot there,

It was only a few weeks ago that I had been waiting in the car for an hour before my friends came to help me.

When heavy snow falls in such a deep snowy place,

It was an experience that I learned that it is good to stay at home without going out too much.

This snow quality is also on the course on the slopes.

The light snow flew in the air and turned white, so that I couldn't see the front.

My face got sick while saying, "I can't see the front at all!"

For skiers and snowboarders, it's the happiest complaint.

Because the snow is light, it takes a long time to fly in the air.

You may only be able to enjoy such light snow here.

I thought I would enjoy the snow in Niseko to my heart's content.

Because the gate from the top lift of Hirafu is open

I decided to climb because it was a big deal.

I walked up from the gate to the summit for about XNUMX minutes.

Since the place to walk was decided, it was easy to walk because the footprints of the ancestors remained.

It was a little windy and snowing, but

The summit was crowded with people chatting and taking commemorative photos.

Everyone smiled because of the sense of accomplishment they had climbed to the top.

The power of nature that makes many people smile easily is really great.

There is a sense of accomplishment when climbing to the top.

Because I climbed, I can slide on a different slope from the inside of the gate.

A special place different from usual.

This kind of feeling is for the backcountry

It will be an opportunity to become stronger in admiration.

The terrain of this mountain is exactly XNUMXD.

Not only can you do a tree run (sliding between trees) on a flat surface,

There are also ups and downs.You can also see the slope from the opposite side.

Interesting for both slippers and photographers.

You can draw various lines,

Because you can shoot it from various angles. 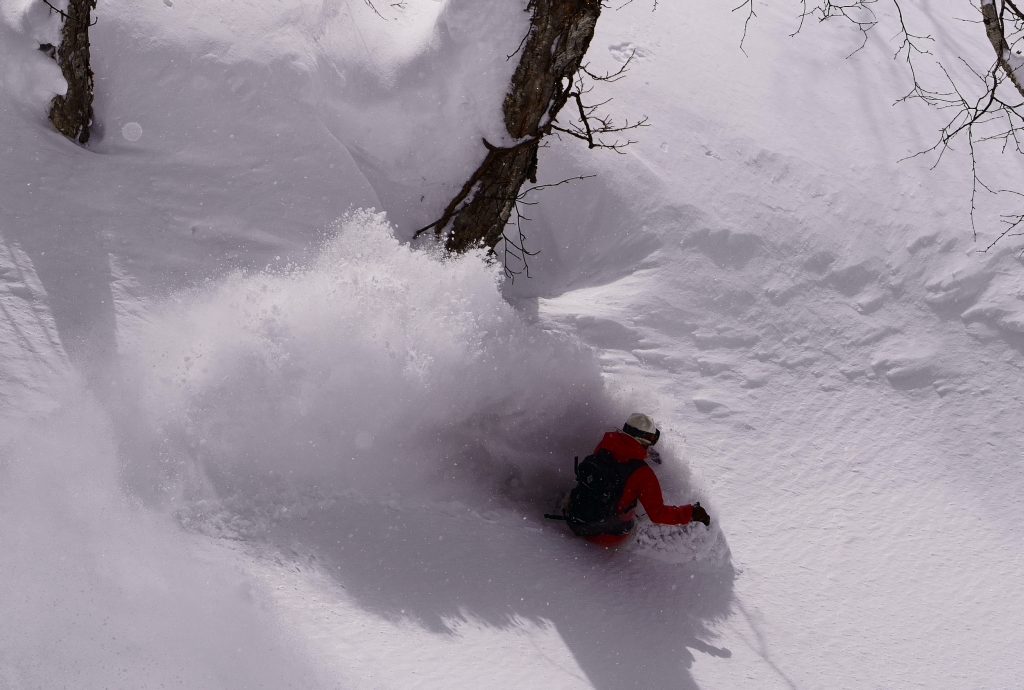 Looking for the point you want to slip,

Tell the cameraman what you are aiming for.

How to tell the cameraman where you are aiming

"I'm rubbing this rail, so the angle from here should be fine."

Of course, even if I say "I will turn next to that tree", it doesn't convey at all.

The punch line is said to be "Which tree?"

It wasn't until I actually had this exchange that I was surprised at my lack of vocabulary.

It's easy to say "that red sign" in the city,

While similar trees are lined up in the forest,

How to tell the other person who is looking from a different place.

In fact, at BTsound's Girls Camp,

American riders take pictures of where they want to slip

I drew a line on a photo on Instagram and sent it to the cameraman.

It's probably because it's hard for everyone to tell.

However, it is common in the backcountry that the radio waves are not connected.

It is recommended that you practice so that you can explain to the other person in words.

"XNUMX meter from the big birch tree just below my fall line,

Turn on the heel side with the rider's light (on the right side when viewed from the mountain side). "

It is necessary to have detailed exchanges with such things.

I feel that the ability to accurately convey my image to the other party is also important.

Not only because of shooting, but also when you slide normally, it is essential to have the ability to accurately convey to the other party.

Suppose you slip ahead of your friends and notice a big hole.

I slipped while misunderstanding that the other party was a different tree,

The right side of the tree falls into a sliding hole.

To prevent that from happening, "a big tree with many branches on the XNUMXm rider's left, XNUMXm above me" etc.

It is also possible to hone your ability to accurately convey the right place to the other party with your friends.

I think it will be a useful skill in the future.

So when I went skiing on a slope near the backcountry like Grand Hirafu,

We encourage each other to practice telling their peers where to slip in their own words.

It's harder than you think, but you'll find it quite interesting.