Jib contest "Jib Contest" held in The Hague, The NetherlandsROCK A RAILGirls riders Mi-yeon (Mihide Yamaguchi) and Yutchi (Yutchi) were invited to the event.FujimoriYuka), Karin (Kairin Onozaki), Watermelon (Haruna Ishihara) And Yamamoto Conrad, the next-generation men's rider who has transferred to SALOMON from this year and is riding on the seaweed.A five-day trip story that includes their event period.Dirty PimpDeliver this story with a short movie and photos by editing!
TEXT, PHOTO, MOVIE: DIRTY PIMP (Dar) It takes about 1 hours from Tokyo to arrive in Amsterdam, the Netherlands.The flight between me (Dar) and Conrad arrived at around 16 pm, so I waited for Mi-yeon and others to arrive at the airport in the morning.The air conditioning was turned off, and it was cold, so I wore clothes and went to bed in a chair. ..After that, we joined Mi-yeon and took a train to the accommodation near the event in The Hague in 10 minutes. 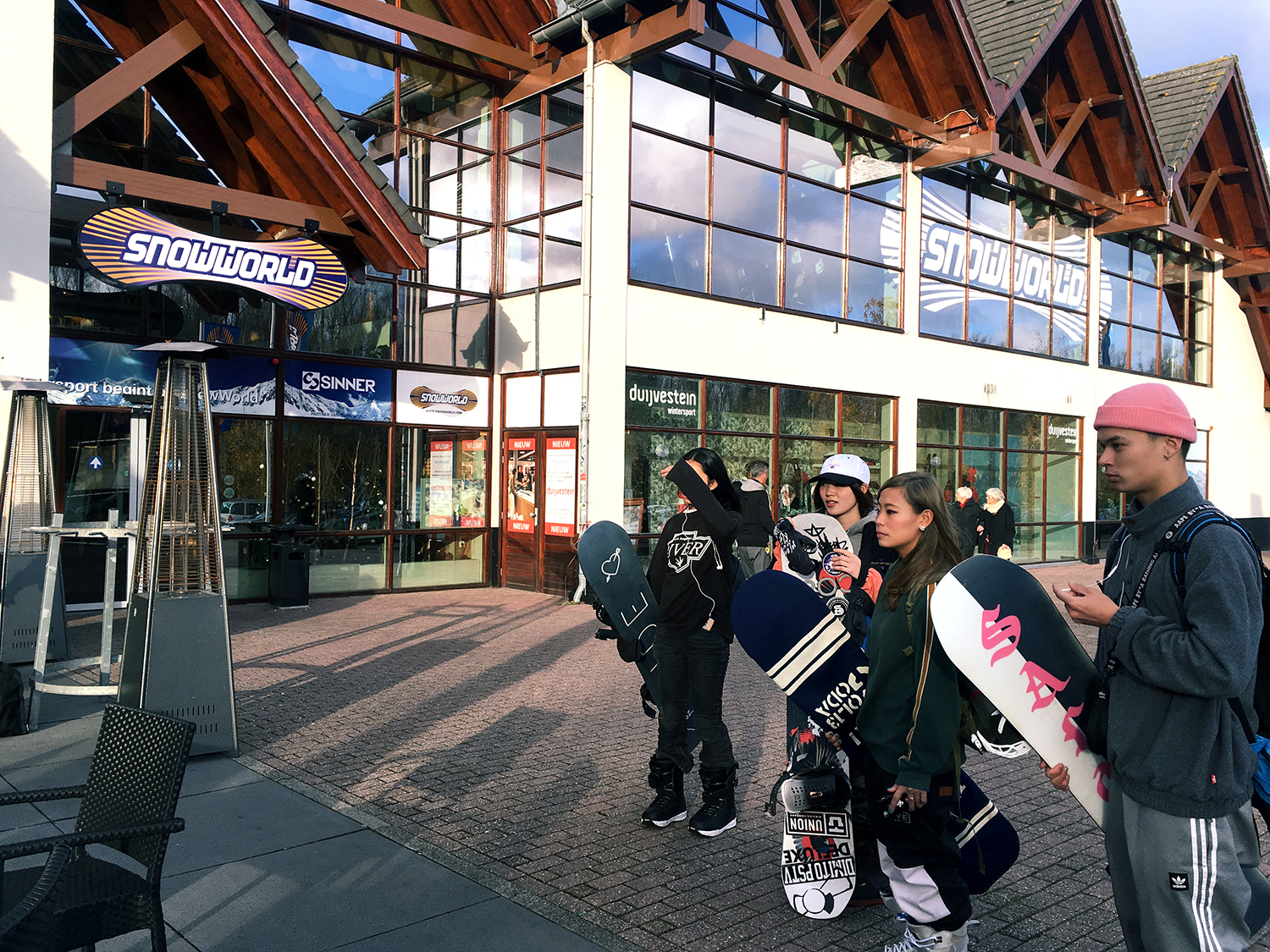 Knowing that the indoor slope called "Snow World" is recommended, I headed for skiing at the mens that I could go to before the event.Traveling here is by train.Everyone prepared to slip and walked from the station with the board and arrived safely.A group of people who are excited even before they get into the size of the facility and the feeling of a resort that can be seen from the outside. 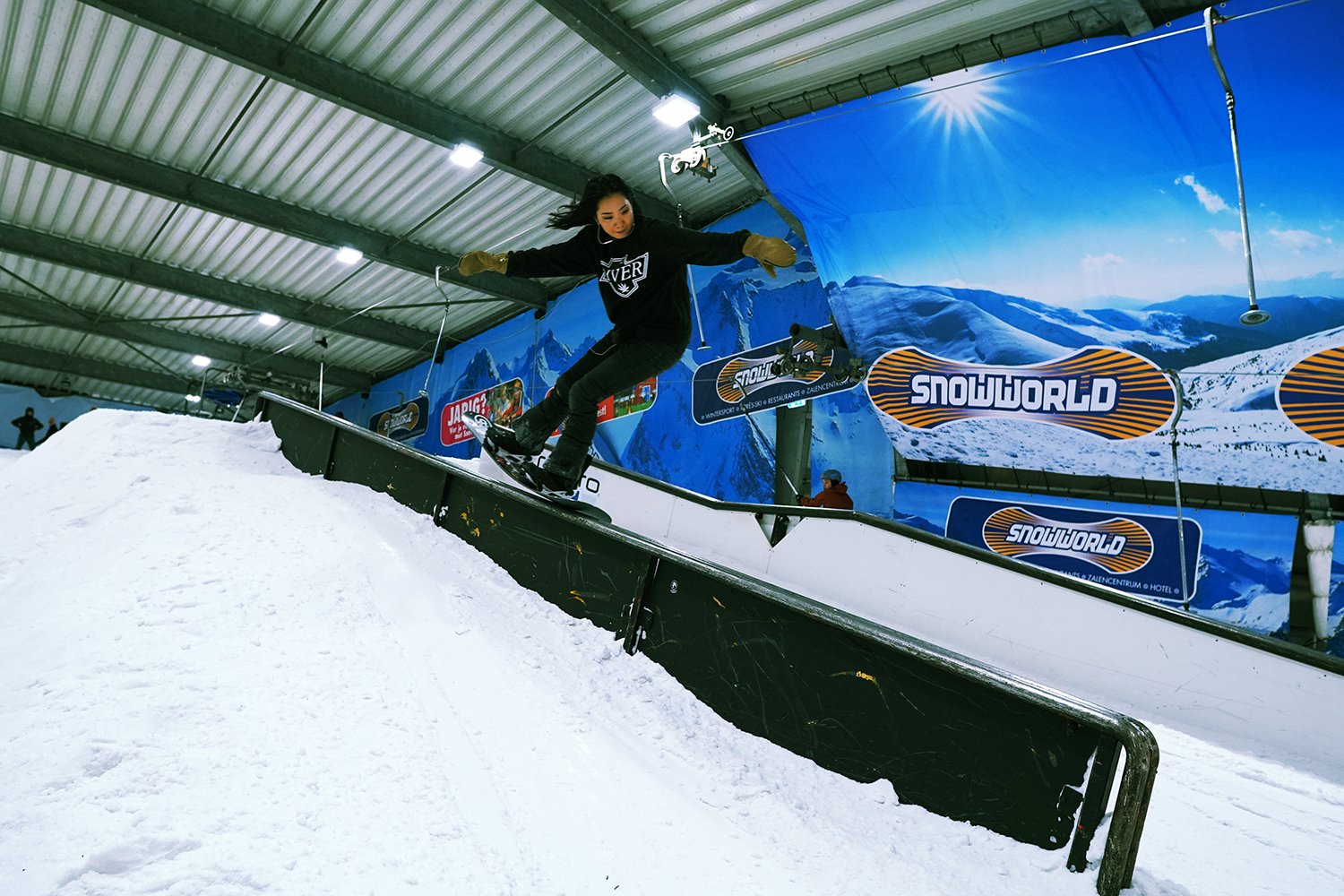 Karin transferred to RIDE.Taken while adjusting on the indoor slope before the event.The press that I am good at is also good.Check EDIT for indoor and event slips !!!! 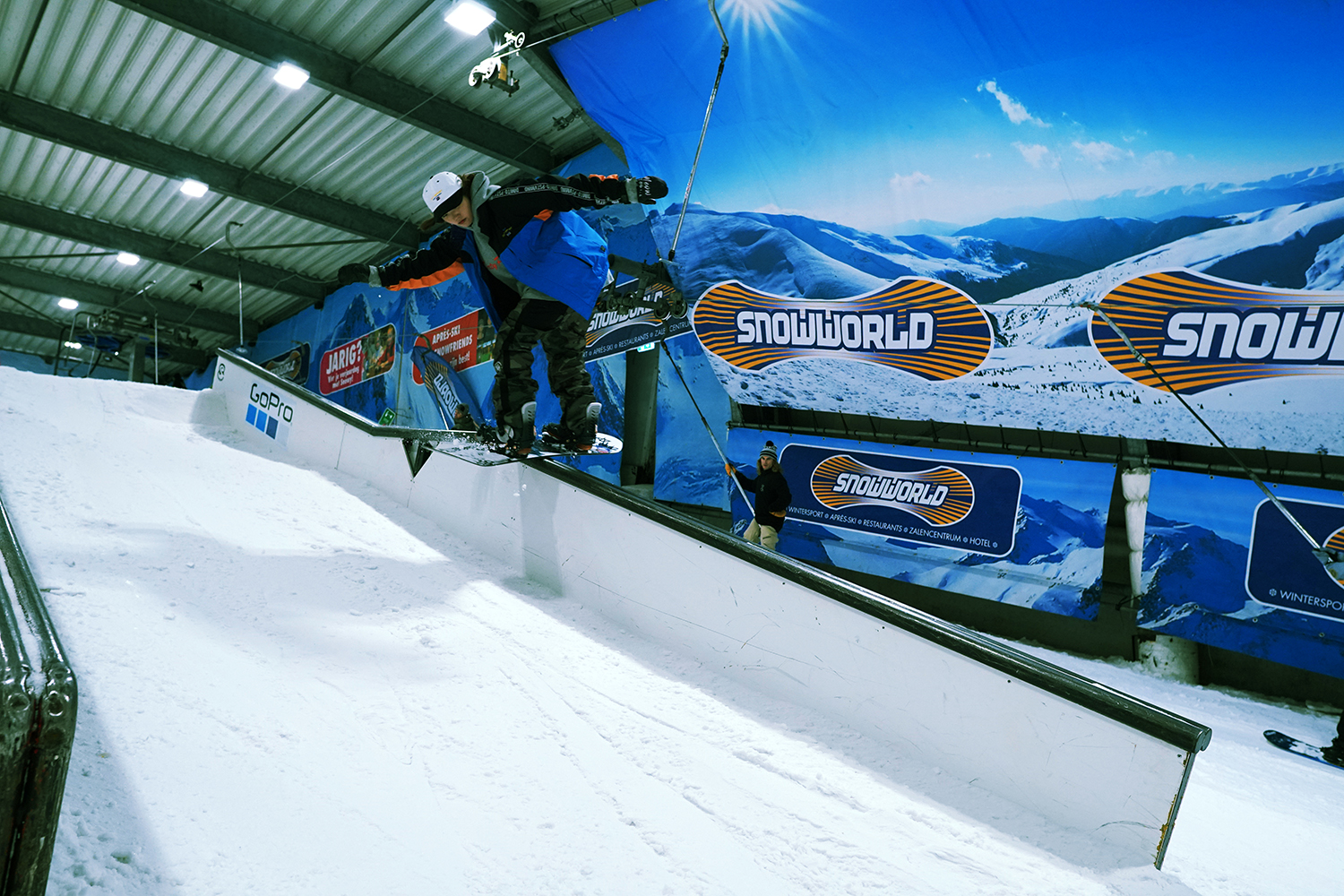 It was a little cold on the slopes, but it was the best environment to have 3 hit items on the T-bar.Mi-yeon also practiced the front board double down. A lot of riders who participated in ROCK A RAIL also came to play and they all had a good feeling and shared tricks. Sightseeing in the cityscape within walking distance.The building is beautiful and cool like Europe.If I had a little more time, I wanted to go to a museum in Amsterdam.If I have a chance next year, I would like to take a leisurely tour. 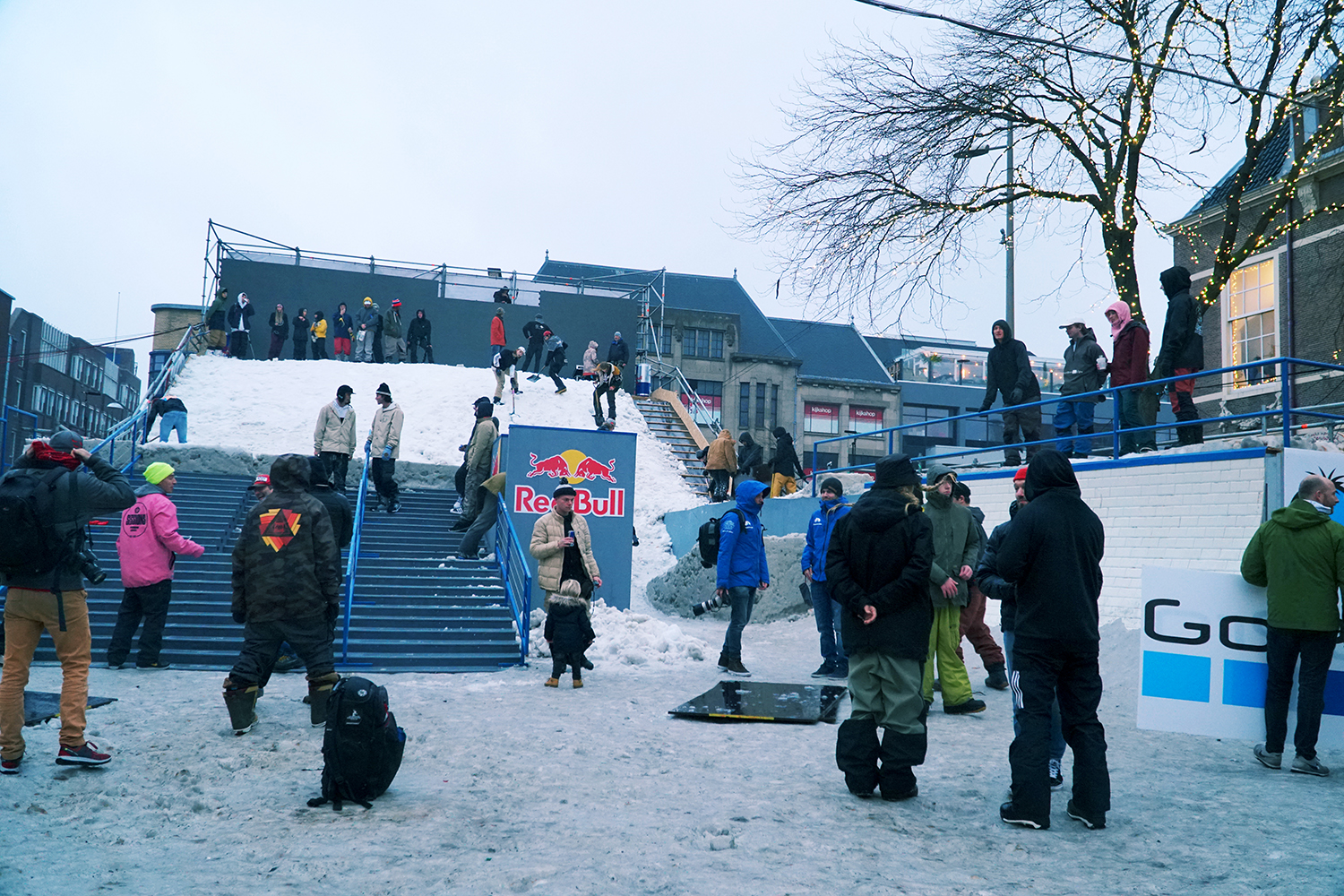 From here ROCK A RAIL !!!!!
Even though it's cold, it rains, so the snow is ticking (laughs).Before the event, everyone was sowa sowa, such as servicing and checking items.I haven't had a big event since BURTON RAIL DAYS held in Tokyo in the past, so when I saw these items, I was so excited the day before that I couldn't sleep (laughs). I think it's been a while since Yutchi also participated in a rail-only event.After all, I was able to get on the board, and even with a tight and difficult approach, I was fascinated by various tricks including switches.Cleanly make up the backside nose slide in double down. At first, Karin was worried, "I wonder if I can install this," but when the qualifying started, he slipped hard.Front board with style from the whole body !!!! 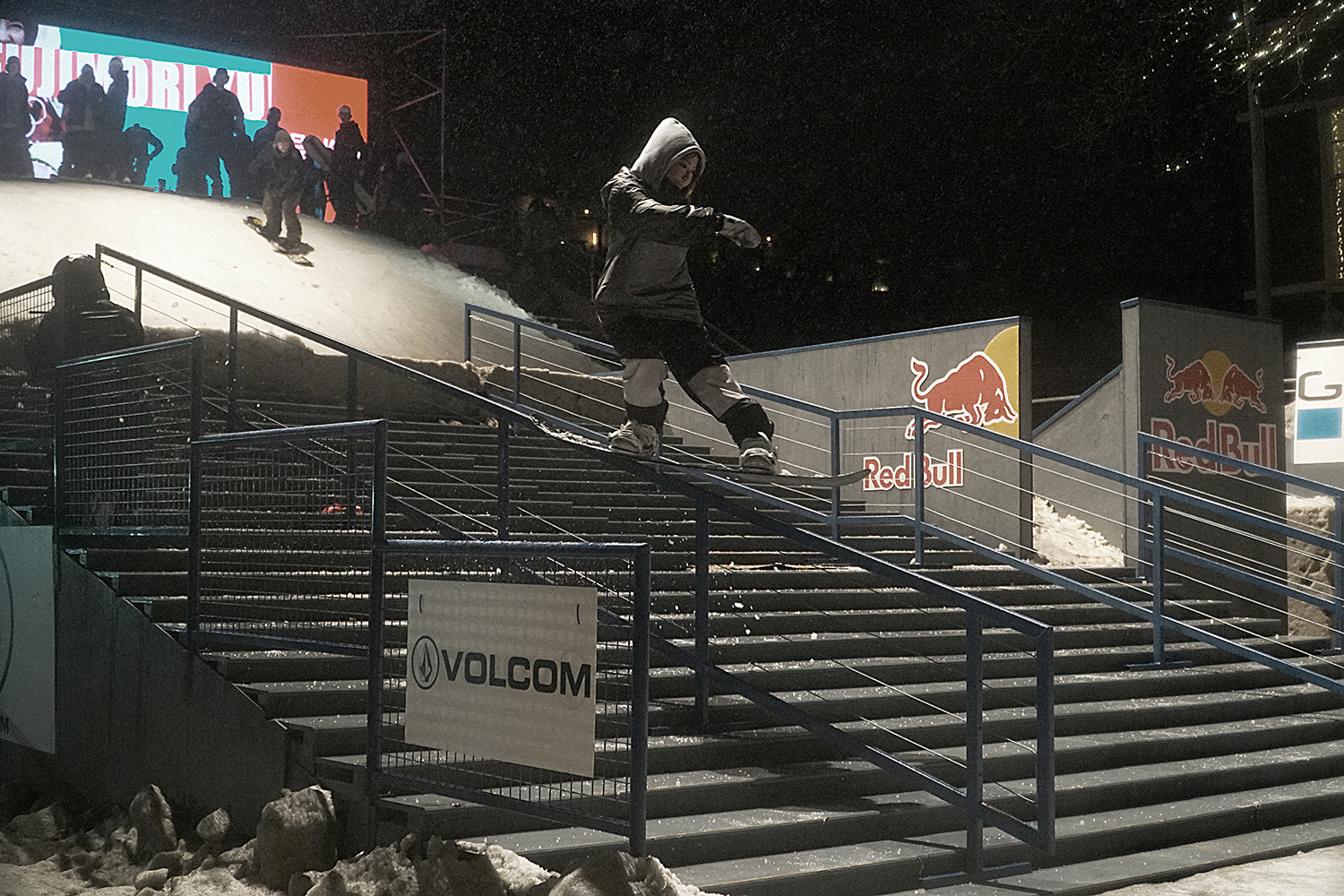 Watermelon that Yutchi invited to participate.120% at the time of slipping and at night parties.You can attack and the momentum is in the style. 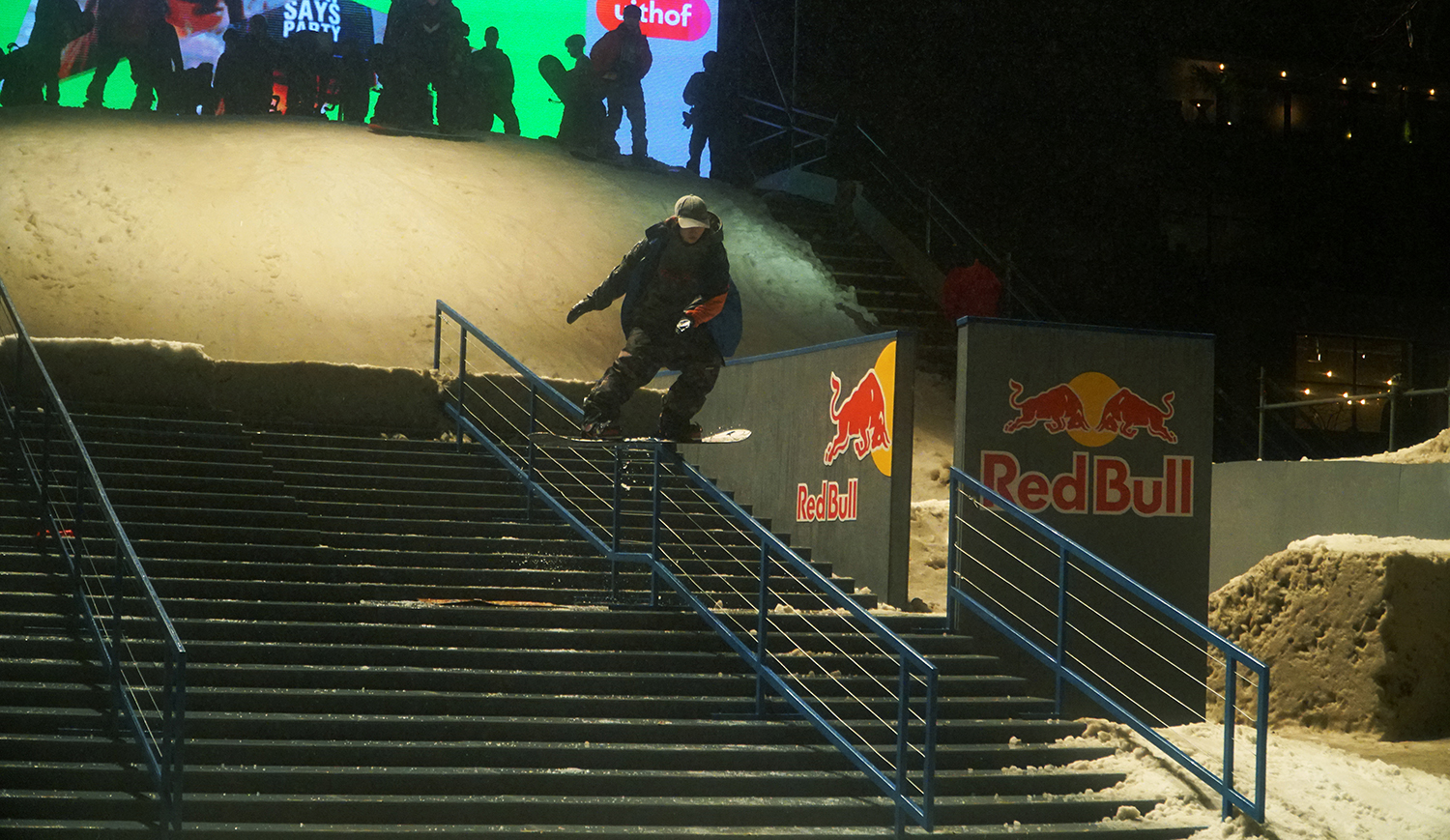 Mi-yeon has always been very particular about it.Even at the event, I slipped and made a presence while fascinating the style.All four girls from Japan passed the qualifying round.Unfortunately, I couldn't win the prize, but Mi-yeon, who is the best style award in me, is fascinated by various tricks with his usual chill style.
It was the first time in the Netherlands that Mi-yeon and Yutchi, who are working hard at the front lines of different fields in the same year, met and talked slowly.By the way, in the next issue of FREERUN, which will be released on January 2th, the crosstalk of the two people interviewed during this trip will be published! 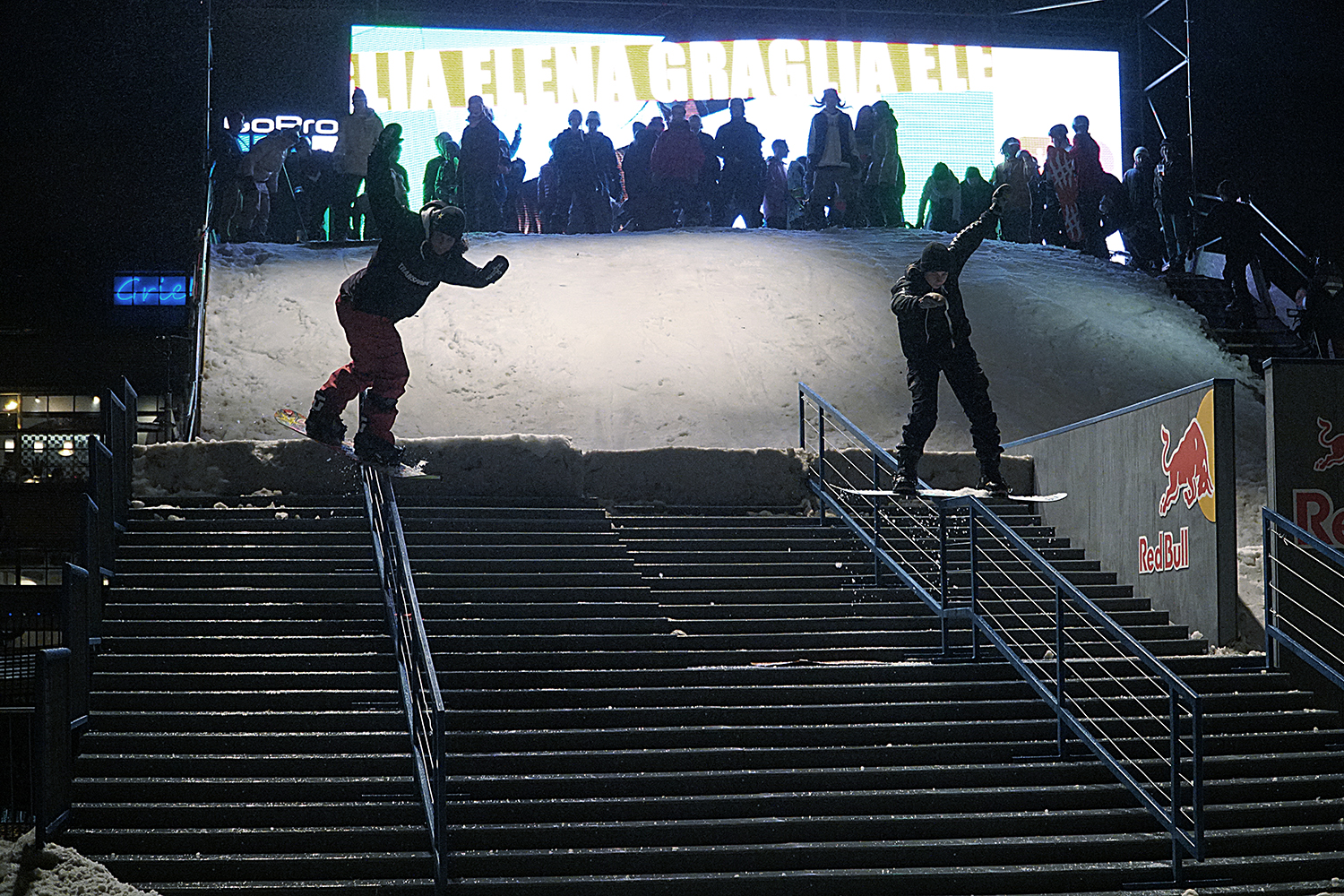 A member of The Uninvited's crew, starring Ibika, Mi-yeon and Karin, who won the championship on the right.I got the impression that I was good from the room the day before, and I am particularly good at the front lip slide of the switch.The style was also cool and it was a perfect victory !!! 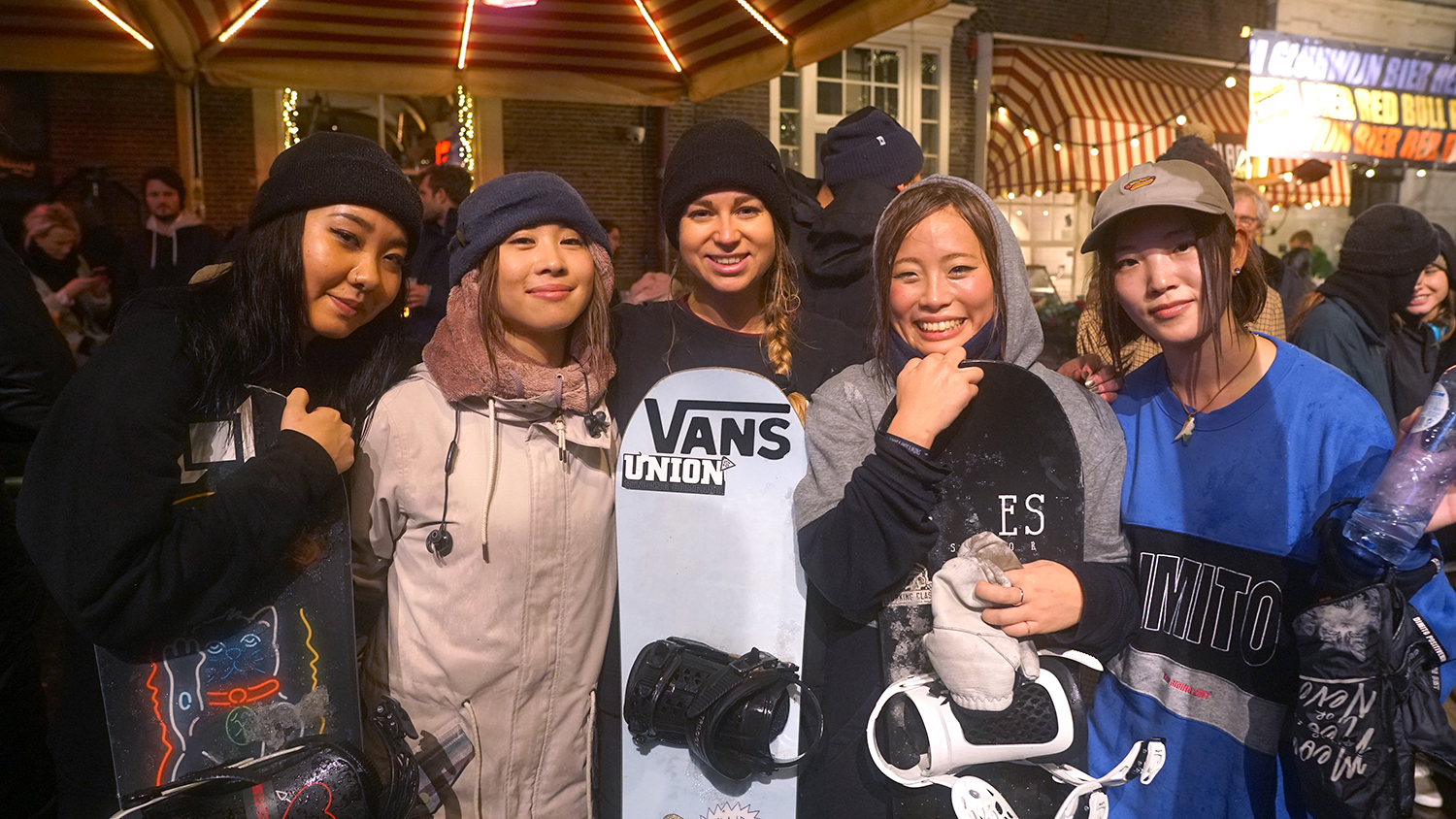 A photo of Ibika and all the ladies.I definitely want to have a session on the street this time. 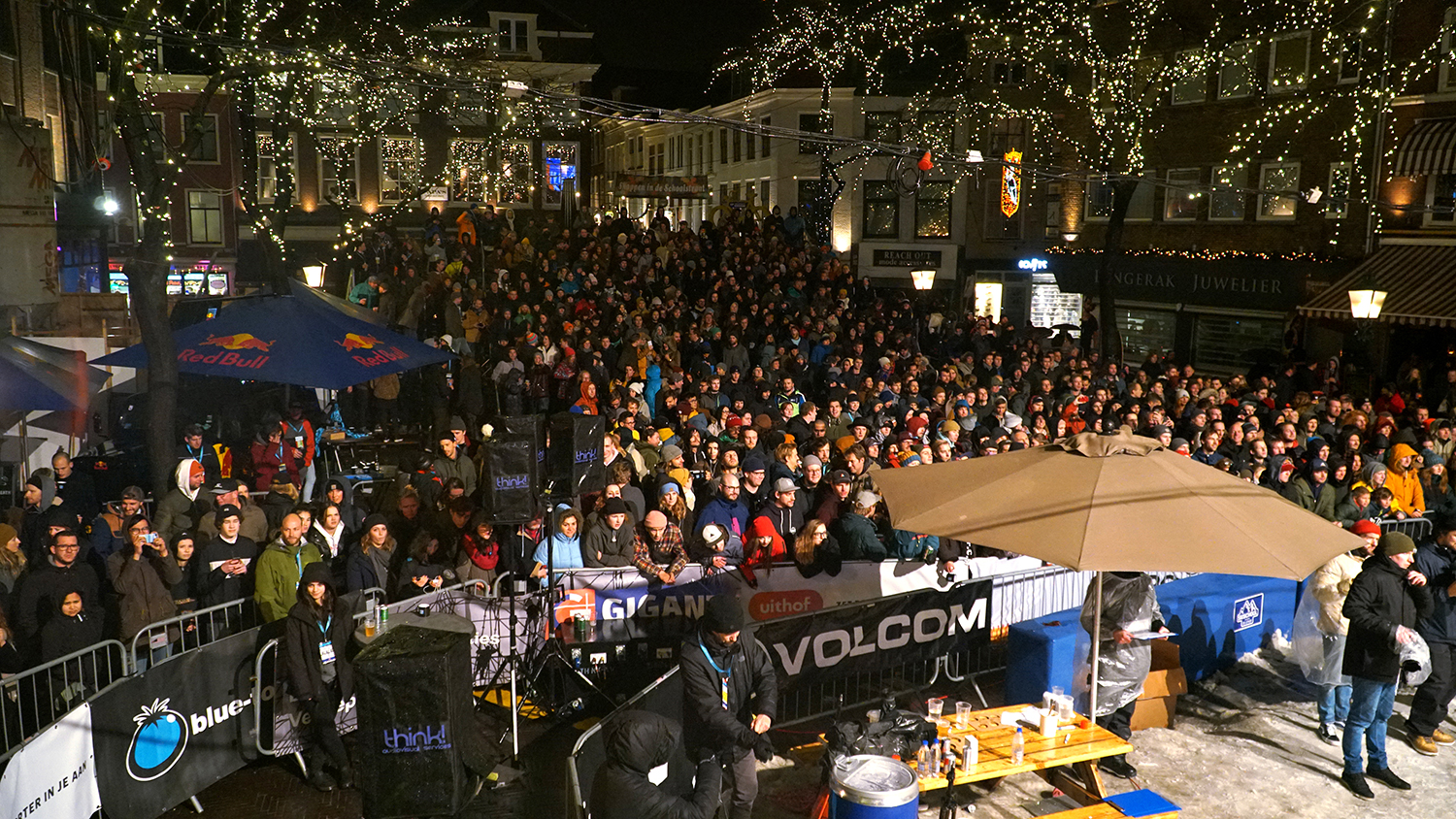 The number of people has increased since the final, and it's banging.The voltage at the venue was also at its peak.Forgetting the rain that had fallen in the early stages, I enjoyed watching the atmosphere of the venue with everyone's beer.I was the most excited and enjoyable event I had ever experienced. Conrad I invited him to go with me.Perhaps because of his youth, the atmosphere of the aggressive riders and events around him was nomalete and tattered.I don't talk much about him, but I hope he will explode his regrets this season.One of the only transfers I took. POSTLAND CREW is active in Scandinavia.It's one of my favorite video crews !!!! Among them, Kas Lemmens who has taken a part in 1 videos.The style was really cool and the popularity was amazing.Powerful backside lip slide. 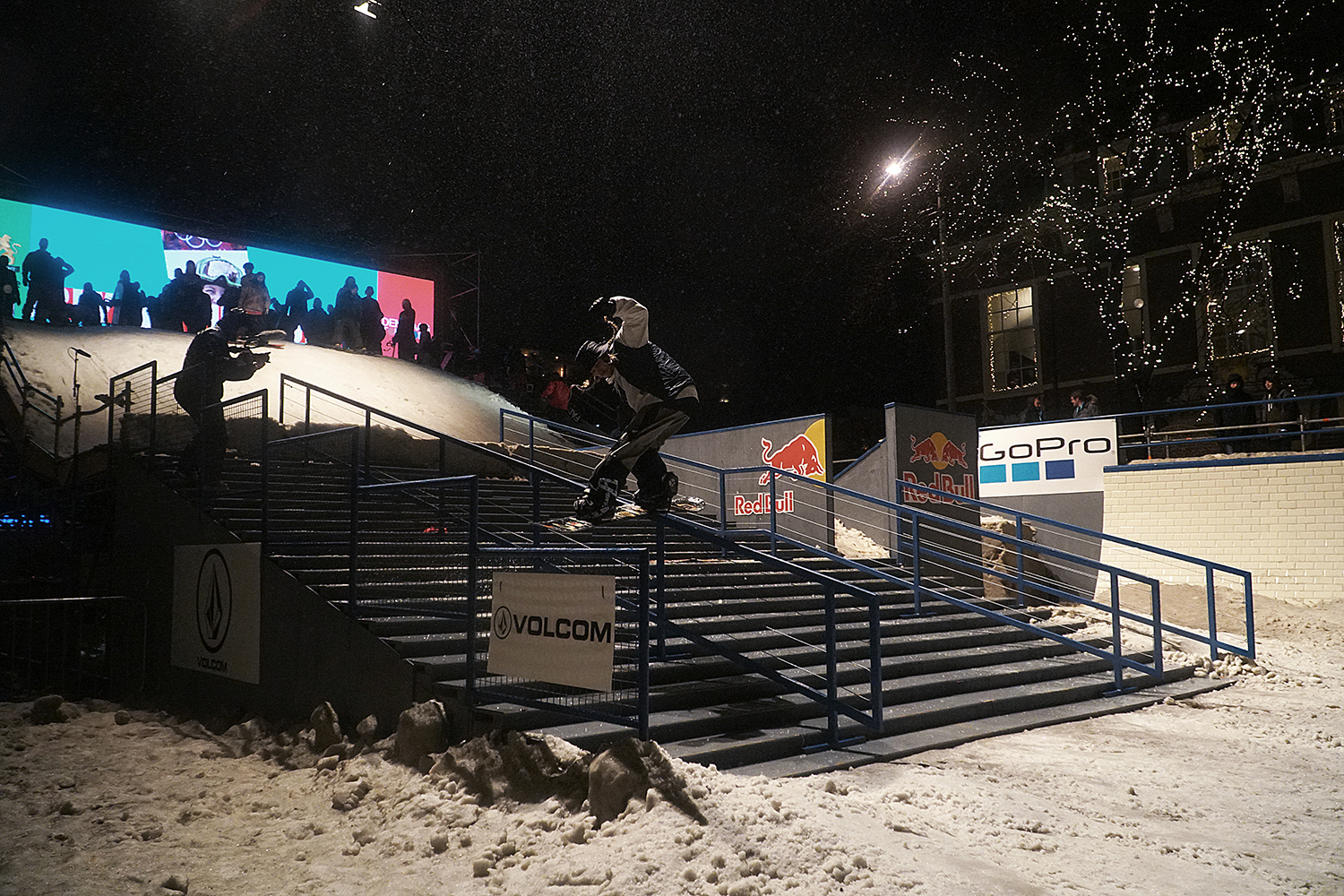 Simon Houlind of the same POSTLAND.While using the section differently from other people, I passed the qualifying while fascinating my style, and even in the final, the movement was different from the qualifying, and I entertained the viewer from beginning to end.Crowd PleaserI also got an award.By the way, this meaning seems to be a person who attracts the masses.It's cool! The first movie I saw was Cees Wille when I was a kid about 13 years old.I've loved him since then, and I've been looking forward to the Cees part every time in the POSTLAND movie, and I finally met him.Even at the event, I attacked a line different from Simon and fascinated mecha.The next time I go, I'd like to take a picture of the room together. I was so busy during the event that I couldn't do Wasser, but when I chilled in the morning at the accommodation at the right time, I met Cees and Simon.I also felt something about it.This time I'd like to shoot on the street or in the park.That's how the trip is over, and the rest is to see and feel the Edit below.

A cool young rider living in the world of streets ...

Ryoki says "Early Woop on the front side wall" ...

Introducing three tricks that Miyon can practice in order ...