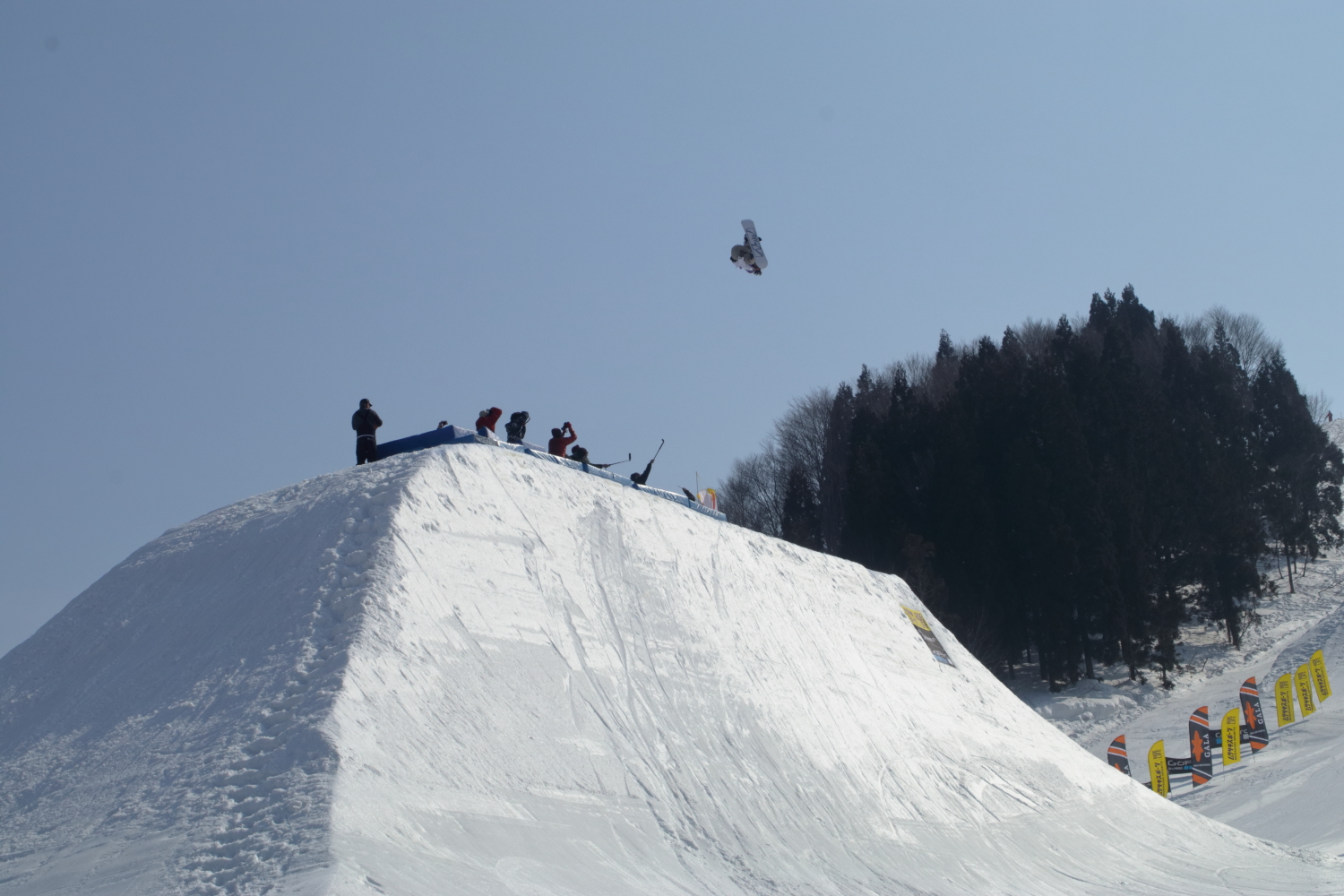 SUPER SESSION AIR MIX, the biggest super spine and kicker in Japan, is back!This year too, GALA Yuzawa has completed the AIR MIX specialty, a huge spine.Last time, AIR MIX closed with a shocking trick by Yuki Kadono to cross all spines on BS360.What kind of drama will be born this time?Many top riders and amateur snowboarders will participate, and we will deliver the pattern of the event where the gachinko battle was unfolded.
Photo: Kentarou Fuchimoto

AIR MIX's famous giant spine is back. AIR MIX is a kicker and spine battle held by top domestic riders and amateur snowboarders.The popular contest, which was not held last season due to lack of snow, was held for the first time in a year.AIR MIX for amateurs and riders without invitations started on Saturday, March 1th.The Super Final will be held on Monday, March 3th.Riders who win from qualifying must fly a large number until they win.If you miss the landing position, this spine will be a catastrophe.Still, riders aiming for Gekokujo face this spine.

The riders who won from the qualifying will advance to the semi-final on March 3th.Riders such as CAPiTA rider Yuki Oiso, who has runner-up in the past, and Kuya Kuya, who made the venue excited by the goofy footer-style tweak, have won well.Riders recommended by each manufacturer from the semi-final will also participate, and will compete with the riders who won from the qualifying.Recommended riders include SALOMON rider Kei Sekiguchi, who returned despite being injured in the previous tournament, Takafumi Abe, who is a digger for GALA Yuzawa, and Teikatsu Hasegawa, who is the winner of AM JAM 19 and is only 2017 years old.The women's qualifying will also be held on this day, and eight riders will be decided to advance to the next day's Super Final.It was a very difficult snow condition on that day.Among them, the rider who ran the board and put out the height and style won the final on the 11th.

The final on the 20th. A pecan that feels good like the words of MC Rio Tahara, "The event is 8% of the weather!"The board is in perfect condition, which makes it easy to run in the cold of the morning.The last day I finally arrived was a perfect day for AIR MIX.For some reason, AIR MIX is sunny every time in the final.The super invitation riders who will participate from this day are full of gorgeous riders.Yuki Kadono, who was the winner last time and showed a spectacular performance.Takahiro Taniguchi, the winner of the last two times. Speaking of AIR MIX, this man, Mr. Takahiro Ishida, etc. also participated.Knockdown Super Final is waiting for you to win the final.The final, which includes riders who have won from qualifying, manufacturer recommendations, and super invitation riders, is a fierce battle.Everyone shows a stylish jump.According to Rio, "Kicker 3%, Spine 7%" is the judge style of AIR MIX.How much will you show off your style?That will determine the game.

16 people have won the Super Final.Three people have won from the qualifying.A young rider from Minami Uonuma, Kaito Jinguji, Kuya Kubota who fascinated the cool tweak with Goofy footer.And Takumi Suzuki who continued to fly with backside air while being a Goofy footer.There are 3 super invitation riders.Three riders recommended by the manufacturer won.

Knockdown tournaments will be decided by lottery. Round 1, Kuya Kuya vs Kei Sekiguchi.Kuuya also fascinated the style of air against Kei Sekiguchi's fluttering tweak.Kei Sekiguchi won by a small margin.Next, Takahiro Ishida vs Kaito Jinguji.Takahiro went straight down the kicker.While the gallery was boiling, I went straight and jumped over the spine.For the first time on this day, Takahiro's slip that had completely crossed the spine showed the excitement of AIR MIX.The next 3rd round is Takafumi Abe and Yuki Kadono.Tomoki, who showed the legendary BS360 all over, showed a SUPER BIG tweak with a spine, but made a mistake in landing.It was a turbulent development in which the previous winner lost in the first round.

Supernova young riders Kokomo Murase and Aya Sato won the final of WOMEN'S.Kokomo Murase beat Fumika Hoshino from Uonuma, and Aya Sato beat Mizuki Gondo from Hokkaido.In the final, Aya is a style match against Kokomo who brought a high turn with a kicker.The air, which had a fixed height and grab, was made with spine to make the venue boil and win the championship.

Kohei Kudo and Shota Suzuki have won the final.Kohei beat Takumi Suzuki, Takafumi Abe, and Kei Sekiguchi in the semi-finals.Shota defeated Takahide Seki, who was in 2rd place last time, Riki Masuda in the quarterfinals, and Fumiyuki Murakami, who continued to attack Spine in the switch in the semifinals, and advanced to the finals.AIR MIX has a drama in each game, and every game is funny.Shota Suzuki leads the final.Shota's landing, which had been making up with a clean slip so far, was disturbed.Kouhei's second attack is regular, but he attacks on the backside and makes a perfect landing.I decided the first run of the day.Immediately after, the landing was just hidden in the shadow from the gallery, but he cheered as he slid smoothly.As a result, Kohei Kudo won the first victory.

Every year, those who are watching are also funny AIR MIX.Not only the game but also the demo run is attractive and interesting.The power of the train by the riders is overwhelming when viewed live.In addition, many dramas will be unfolded at the famous spine next year.

STAMPED a story about Ay ...

This is the state of Marunuma Kogen Ski Resort, which opened on December 12 (*...