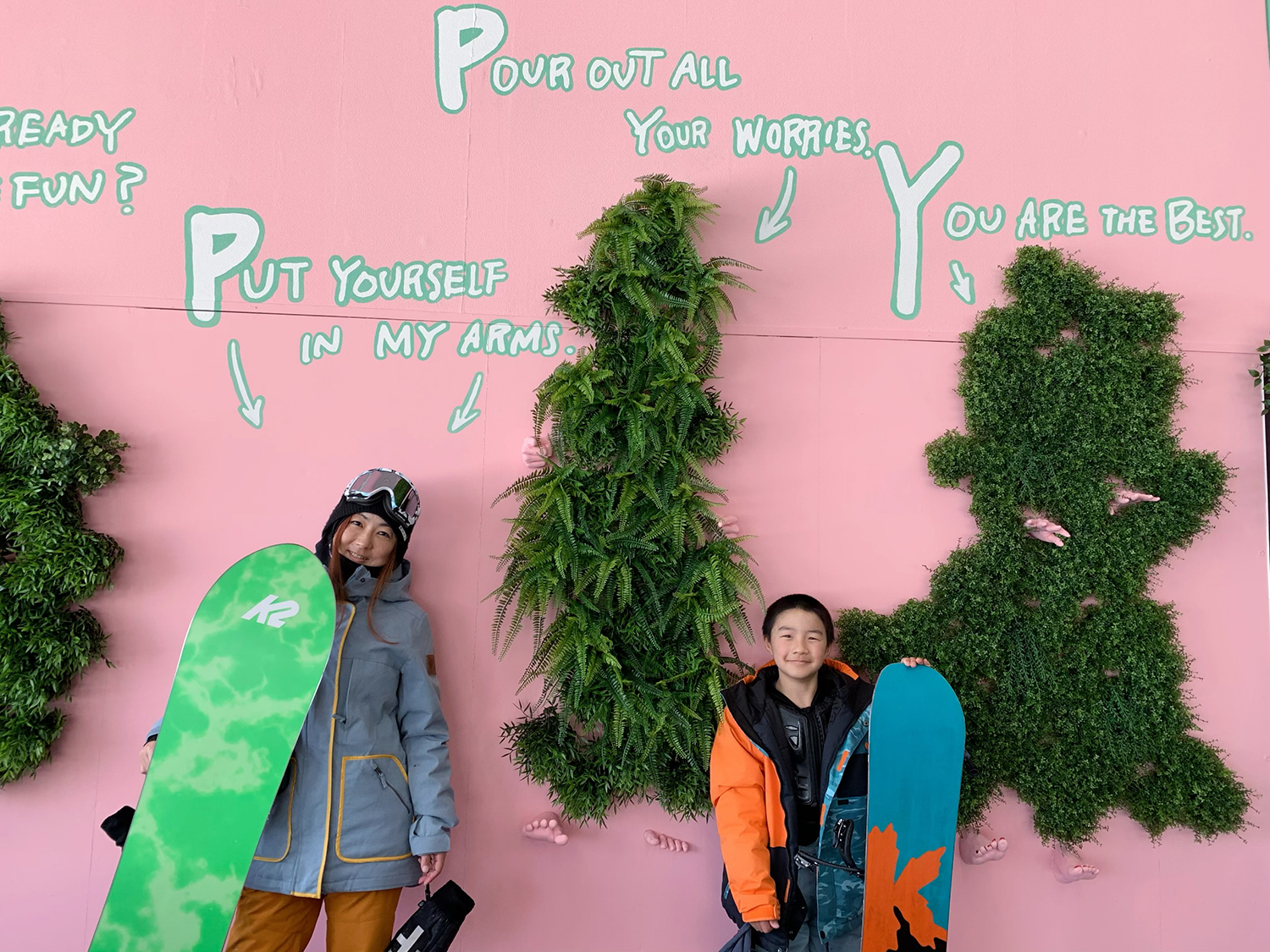 Perhaps this will be the last family snowboard trip of the season.We headed from South Tohoku to North Tohoku, aiming for the Iwate Appi Plateau.
Text: Yukie Ueda
Special Thanks: Appi Kogen Ski Resort

Head north on the Tohoku Expressway with Mt. Bandai, which is usually slippery, on your side.As I approached Morioka, a mountain suddenly appeared in front of me.It is Mt. Iwate called Nambu Fuji.He gave a voice of admiration in spite of his personality.

"Hachimantai" It sounds nostalgic for me. Speaking of domestic pro tours in the XNUMX's, the flow of the season was to start from Asahikawa in Hokkaido and descend to Hachimantai.There were many snowboarders who boarded the ferry along with the Pro Tour and moved, and the inside of the ship, which was full of acquaintances, was like a school trip.At that time, most of the top amateurs and professionals were in the halfpipe tournament, so the tournament was like a festival where everyone gathered.I didn't have a car, so I was on the Pro Tour looking for a companion to carry me under the name of "Hermit Crab".I think it was a sweet idea when I think about it now, but there are other "hermit crab" friends, and I exchange information with "that car, I can ride another one!", And if I can't find it, I move by night bus or train. It wasn't a pain to do.
Looking back on those times, I was greeted by Mt. Iwate and entered Hachimantai.

Actually, it was my first time to visit Appi Kogen, which is located in Hachimantai City.
For a quarter of a century, I have traveled domestically and overseas with a snowboard in my hand.I thought I had slipped most of the major areas, but when I planned my trip this season, I realized that there were many fascinating snowy mountains that I hadn't visited yet.I've been there before, but if I include the mountains that I want to ski again, I can't slip in one season.
Abi is one of them.I heard from the expert snowboarders in the north Tohoku region about the quality of the snow and the good terrain, so the high season for powder was also attractive, but this time I decided to aim for spring.Because there was another purpose.

See Japan from the top of the mountain

The resort stood quietly in the vast land of Iwate.Without exception, this season seems to be surrounded by unusual tranquility due to the influence of corona, but regardless of that, the Abi Kogen Resort, which stands densely in this magnificent land, has both extremes of tranquility and glitter. Was there.As we moved during the day, we rested in a comfortable bed overlooking the setting sun on the slopes.

The next morning is sunny.Aim for the summit by riding a gondola with Mr. Oikawa, the principal of the XNUMX-year-old school in Abi, who was introduced upon arrival.Nothing is more luxurious than being guided locally in the area.
If you climb the promenade from Gondola Sancho Station for about XNUMX minutes, you can stand on the summit of Maemoriyama at an altitude of XNUMX meters, and a beautiful panorama spreads out.
You can see the magnificent view while rowing the skyswings installed on the top.You can see Mt. Iwate, Mt. Hachimantai, Mt. Nanashigure, Mt. Himekami, etc. that you saw along the way, and Mr. Oikawa pointed to Mt. Chokai and Mt. Hakkoda.The tiger shined when he explained that it was Hokkaido when he crossed the sea beyond Aomori.I feel that Hokkaido, which I went by plane or ferry, is nearby.The whole of Japan is small enough to fit in California.That's why I think it's fun to move around and enjoy various areas.

We visited the Abiyama summit shrine, which is said to protect this mountain, and we were excited to put on the board.

The fun of Appi

First of all, I ran through XNUMXkm from the top of the gondola comfortably.The mellow sloped snow-packed burn with moderate speed is irresistible to the body of Asaichi in the morning.This "Yamabat Course", which seems to be enjoyable by a wide range of people, became my morning routine during my stay.

Abi is a large-scale ski resort that represents Tohoku, and has a strong image of skiers and families.However, when I visited this time, I felt that the snowboarders were full of delightful stories.It was already closed, but I had heard the reputation of Nishimoriyama's tree run, so I checked the terrain and the feeling of the tree.Indeed, this is a location that will satisfy overseas riders.

Husbands and sons who love to fly and hit anyway, whether it's terrain or artifacts.In Japan, the slopes are overdeveloped, so there are few places to play in the natural terrain, and the number of slopes with permanent parks has decreased compared to when I was skiing in Japan.
Meanwhile, Appi's Quest Park, which appeared from this year, was enough to raise their tension and satisfy them.The husband and son all said, "The kicker is up and easy to fly." "It looks like a mammoth kicker."

The Mammoth Mountain kicker, which boasts one of the world's best parks, is designed so that jumps can fly higher, regardless of size, even on lines where beginners and children slide.On the other hand, some Japanese parks emphasize safety design, and there are many jumps that do not raise the jump so much."It's easy to practice spinning" for the up system after a long absence, and the tiger immediately started to challenge the front flip and back flip.Abi has a lot of jib items, and there was a figure that parents and children slipped lively until the lift stopped.

At the school "Quest Academy" held in Abi, we offer professional coaching for those who aim to improve their level and free park lessons for those who enter the park for the first time.This time the tiger was a quest academy experience, so I had Yasu Sato, who is also a representative and my old friend, coach me.It was a teaching method that I had never experienced in the United States, and I was convinced that the Japanese snowboarder who was instructed under him was running up to the top of the world.

It was also a great experience to practice with the children attending the academy.Japanese children often practice.Even if it rains or the board doesn't run, it doesn't stop for some reason and keeps slipping as a matter of course.When I was in it, the tiger naturally worked hard.

"This figure doesn't exist in Americans," we, the parents, muttered while watching.
"It's the first time I've worked so hard ..." The tiger must have felt a certain response that has never been seen before, even though it became sick.

The towering tower of lemon yellow can be said to be a landmark of Appi.It can also be used as a landmark while sliding on a wide slope.
This time I stayed in the Executive Tower Family Room at Hotel Appi Grand for XNUMX days.The image of staying at a resort in Japan is one to two nights, but in North America it is not uncommon to enjoy a one to two week stay even on a family trip.I think there is a big difference in how to take time off from work, but I get the impression that I can do my best again because I have time to take a break from my daily life.

The hotel room has XNUMX wide beds.There were spacious sofas and tables in the living space, and it was very easy to spend because it was separated from the bedroom space in one space.There was also a space with a dresser that doubled as a walk-in closet near the entrance, so even with snowboard gear, the room could be used spaciously.
There was a magnificent view outside the window, and we could wake up in the morning sun after XNUMX o'clock and sleep soundly early at night without waking up.When the tiger woke up with the rising sun, he was studying himself at the desk by the window.Even though I was at the resort, it seemed to be surrounded by nature.

The quality of the food at the hotel was excellent.I'm sure the ingredients in Iwate are delicious.I was about to eat too much and heavier, but I could just slip and move.
If you take a step from the hotel, the slopes are widespread.I got on the gondola at XNUMX:XNUMX every morning and repeatedly slid down from the top of the mountain to the bottom.I also liked to ride the gondola again before XNUMX o'clock in the evening and take a walk on the slopes at dusk.
He comes out of his balaclava and runs through the snow while breathing in the pleasant air.While the corona is in widespread use, I once again felt that it was very important for my body and soul to remove the mask and breathe in the natural air.

"I want to come back again in the high season when powder is piled up."

The last of our family's Japanese snowboard trip was a wonderful stay to experience the warmth of the people with delicious ingredients from Iwate and a treat from the snowy mountains.